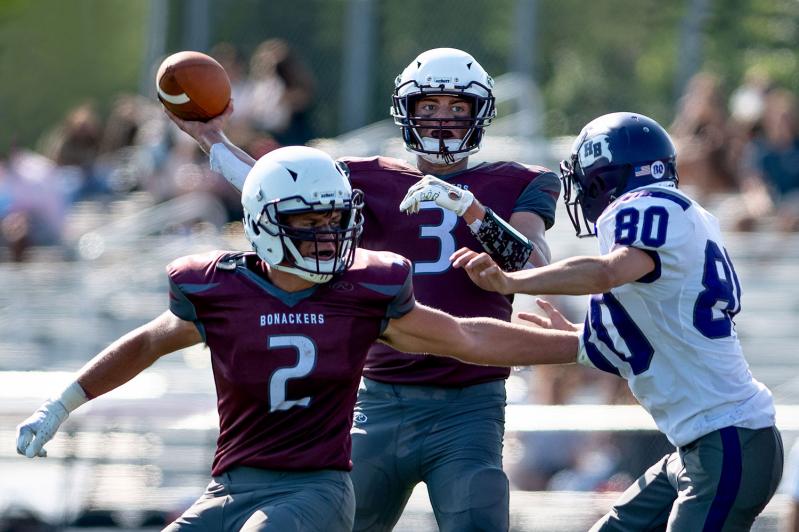 Finn Byrnes, one of East Hampton High School's varsity football team's captains, had all of the offensive linemen rise from a kneeling huddle after Saturday's season-opening 42-14 drubbing of Hampton Bays so that they could bask in their joyful teammates' applause.

A few moments later, Joe McKee, the head coach, said he and his assistants, Lorenzo Rodriguez, and McKee's brother, Kelly, were proud of the way their charges, after giving up an early score to the Baymen, had come back to utterly dominate the game thereafter.

Charlie Corwin, Bonac's sophomore quarterback, was adept at running the "pistol spread" offense that Rodriguez had devised, an offense with "lots of motion" that kept the visitors on their heels for virtually the entire four quarters.

With Corwin, Byrnes, and Danny Lester running the ball, and with the O-line blocking, East Hampton's offense proved to be unstoppable on the ground, obviating the need to take to the air much. Corwin did so on five occasions, most notably when he hit Will Darrell with 15 and 11-yard touchdown strikes in the second quarter.

By halftime, with East Hampton way in front, at 34-7, it was all over. With the scoreboard clock turned off, the referees kept track of the time on the field in the second half.

Before the game, witnessed by a good-sized crowd under sunny skies, Emma Hand, an East Hampton Middle School seventh grader who's to appear soon in two musicals in Southampton, "Into the Woods" and "Miracle on 34th Street," sang the national anthem as the teams, flanking four first responders -- Samone Johnson and Maria Dias of the East Hampton Village Ambulance squad, and Police Officers Joseph Izzo and Matthew Morgan -- stood at attention with the flag flying at half-staff in remembrance of Sept. 11, 2001.

The Bonackers had to punt on their first possession, a long third-down spiral thrown by Corwin having landed on the turf untouched. Following the punt, a 15-yard penalty treated the Baymen to a first-and-10 at midfield, and seven plays later Patrick Donahue carried the ball into Bonac's end zone from the 1-yard line. The point-after kick was good.

East Hampton was to respond right away, however. Corwin ran for a first down at midfield to get the drive going, and gained seven on his next try before Donahue tipped away a long pass from the Hampton Bays 40 that was intended for Darrell.

No matter, on the next play Byrnes broke through for a 40-yard touchdown, after which Corwin ran the ball in for 2 more points and an 8-7 lead, a lead the Bonackers were to pad substantially in the 18 minutes that remained in the first half, thanks to 17 and 36-yard touchdown runs by Byrnes and Lester, in addition to the previously mentioned scores.

East Hampton defended well too. At one time or another, the Baymen's chief threats, namely Kazmin Pensa-Johnson, the tall quarterback, Cooper Shay, a solid power runner, and Donahue, along with some big linemen, walked gingerly to the sidelines.

A fumble recovery by Hampton Bays at East Hampton's 40 late in the game led to the visitors' second score as Pensa-Johnson, with a first-and-goal at the 10, swept the right side. Eustorgio Urbano's subsequent kick was good.

Afterward, the teams saluted each other with helmets raised, and McKee, following the upbeat team huddle, called out to Shay, "I love the way you run, man."

Tomorrow's game is at Center Moriches at 4:30.