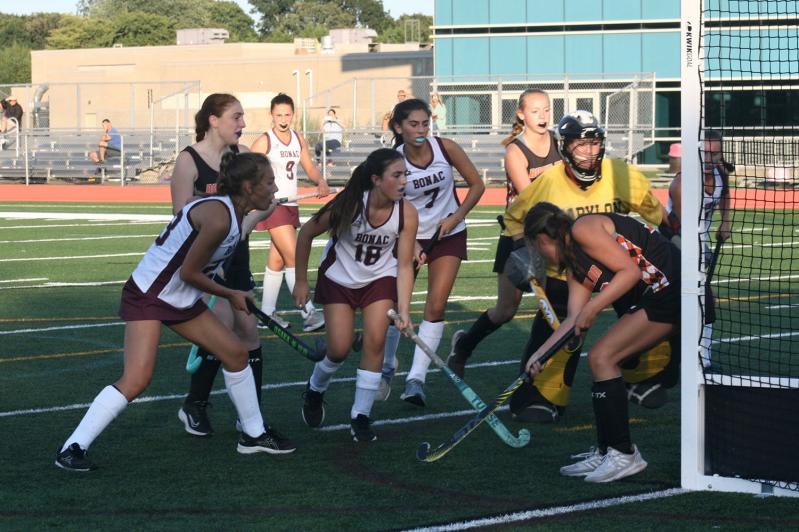 Ava Arcoleo, at left, one of a number of strong midfielders Dana Dragone has, scored the last goal in the East Hampton field hockey team's 7-0 rout of Babylon here on Friday.
Jack Graves
By Jack Graves

The East Hampton High School boys soccer team was resting on its laurels this week, after having knocked off the 2019 state champion, Jericho, 2-0 in a nonleaguer Saturday -- improving its record to 3-0 -- as the field hockey team, buoyed by Friday's rout here of Babylon, was aiming to avenge last season's bitter playoff loss at Rocky Point.

To the field hockey team first.

Dana Dragone, who was moved up from the junior varsity to coach the varsity in the wake of the former coach Nicole Ficeto's resignation, during a telephone conversation over the weekend cautioned against overpraising this year's team based solely on its 7-0 thrashing of Babylon, which in former incarnations used to be Bonac's foremost foe.

Missing a couple of key players and not passing well, Dragone's charges lost their first outing, versus Bayport-Blue Point, 2-1, the winners making good on both of their corner plays. Melina Sarlo, just one of a number of strong midfielders Dragone has, scored on a penalty stroke.

Everything was clicking here on Friday as the Bonackers marked up well, letting nothing go unchallenged, passed crisply, and, given the score, obviously shot very well.

Caleigh Schuster, an eighth grader making her home varsity debut, had to make only one save, that being a dramatic sliding one well out of the crease in third quarter. "She's definitely not shy," Dragone said of Schuster, who pursues the sport pretty much the year round, as do a number of her teammates.

Aside from the three seniors, Arabella Kuplins, Delilah Desmond, and Emma Stein, Dragone has coached all the others in the past.

It should be noted that the coach did not try to run up a score. Much time was taken off the clock in the fourth quarter as Dragone's players passed the ball back and forth.

The Bonackers broke the ice on the third of what were to be 11 corner plays, near the end of the first quarter, as Sarlo, who was camped out by the left corner of Babylon's cage, poked a shot past the Panthers' goalie, who was in the succeeding 46 minutes to find herself under almost constant siege.

By the halftime break, East Hampton led 4-0, thanks to corner-play goals by Kuplins and Emma McGrory -- a relentless sophomore midfielder who did not play at Bayport -- and an open field score by Katie Bruno, a sophomore forward, in the final half-minute.

McGrory notched her second goal of the afternoon just before the buzzer ending the third quarter sounded.

Toby Allen, a junior forward, and Ava Arcoleo, a junior midfielder, found the back of the visitors' cage in the first five minutes of the fourth, after which Bonac played keep-away.

Though she didn't score, Chloe Coleman, a junior midfielder, was nevertheless prominent, winning struggles for possession and repeatedly setting teammates up with sweeping hits.

East Hampton's lively crew were to have a chance at Rocky Point Tuesday to avenge last season's first-round playoff loss, a game in which several of East Hampton's players were roughed up, causing Ficeto to criticize the referees, though to no avail.

Quizhpe, from whom not much was heard last season, broke the ice at Jericho with his sixth goal of the present campaign midway through the first half. In describing it, McGovern said, "From the right sideline, with their goalie coming out, John played it over his head and into the back of the net. He's a very opportunistic player -- he can hurt you in various ways."

A three-pass attack that began at midfield resulted in Gary Gutama scoring Bonac's second goal in the second half. Armijos got the assist.

Neyser Dutan, who had been sidelined for two and a half weeks so that a stitched cut above one of his eyes could heal, was back in the goal for the Kings Park and Jericho games.

"We're in a good spot," said McGovern, "though there are some things we can work on, playing intelligently when we don't have possession being the main one."

The team, he added, will face a big test Saturday here against Sayville. The game is to start at 1 p.m.