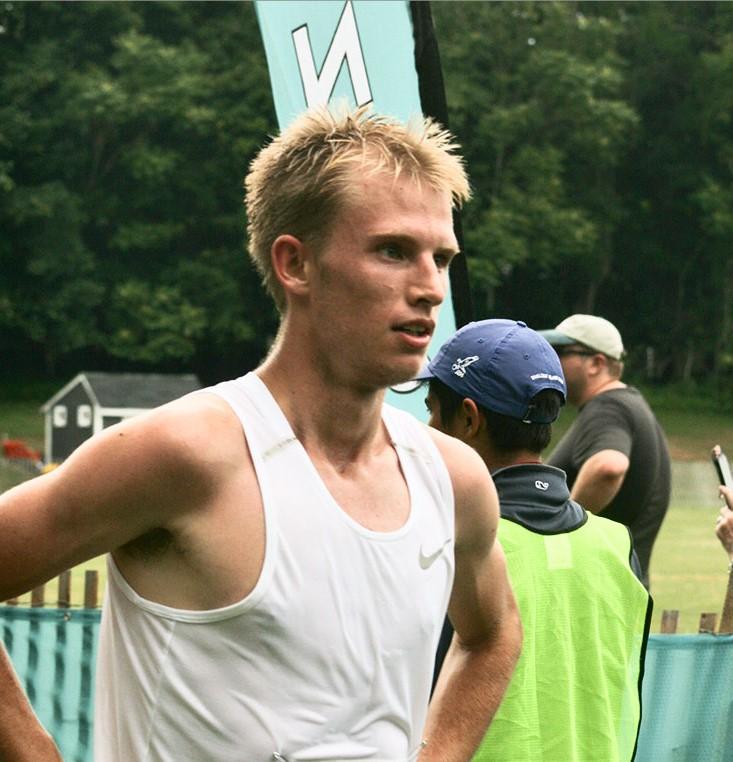 Kal Lewis of Shelter Island, who's running at the University of Iowa now, was the winner of Ellen's Run in 2019. Above, he took a breather after finishing the recent Shelter Island 10K.
Jack Graves
By Jack Graves

There will be no day-of-race registration this year at Ellen's Run, the popular 5K road race proceeds of which are spent for breast cancer prevention, treatment, and counseling here, though Dr. Julie Ratner, the race's founder, said this week that it's easy to register online through ellenhermanson.org.

It will be a hybrid event this year, Ratner said, with a 5K road race based at the Southampton Intermediate School on Aug. 15 at 9 a.m., and with a virtual race spanning Aug. 15 and 30, a period during which participants -- Ratner expects some to be from as far afield as California and Colorado -- can post their results.

Ellen's Run drew a field of close to 800 in 2019 -- a field that included 60 breast cancer survivors. For a dozen years, it was held at Stony Brook Southampton Hospital's Parrish Hall, "but the hospital was worried that this year if there were a coronavirus surge they would need the Hall," Ratner said. "And so, we had to play catch-up. Over the July 4 weekend the school told us we could hold it there. We're hoping, as always, for a huge turnout, but there will be no day-of-race registration. Because of Covid we're trying to keep it safe. . . . We don't want people to be so close."

Online registration for the road race will be open until 11:59 p.m. on Friday, Aug. 13. There will be in-person registration and bib pickup at the school on Aug. 14 from 9 to noon.

On June 19 Ratner went to the Shelter Island 10K, the first large post-Covid road race on Long Island, with 598 runners in the 10K and 389 in the 5K, and came away encouraged -- even though at the time she didn't know where her race would be held.

"It felt good, it was casual, there was a nice energy -- just what I hope we'll experience at our run," she said.

Last year's 25th anniversary Ellen's Run was, perforce, virtual, Ratner said. "We had close to 400 participate, which was gratifying. Without the support we get at Ellen's Run we couldn't do the work that we do." The foundation, named for her late sister, Ellen Hermanson, "gave out $250,000 in grants this past December."

The goal of that work, she added, "is to make sure that all women living out here can have access to the services and care they need."

The Ellen Hermanson Foundation, Ratner said, had recently partnered with four South Fork groups -- the Shinnecock Health Clinic, the Bridgehampton Child Care and Recreational Center, the Retreat, and the Organizacion Latino-Americana of Eastern Long Island -- to further that goal.

The foundation will also benefit from a Back in Black gala at the Clubhouse in East Hampton on Aug. 28 at which Tovah Feldshuh, the Broadway, film, and television actress, and John Graham, the executive director of the Hampton Racquet club, are to be honored, and at which the Lynn Blue Band will play.

Kal Lewis of Shelter Island, who has his sights set on running a sub-4-minute mile at the University of Iowa next year, was the winner at Ellen's Run in 2019, in 16 minutes and 15.90 seconds. Caroline Bierbaum LeFrak of Southampton was the runner-up, and the women's winner, in 17:13.06.

Erik Engstrom of East Hampton, a recent University of Massachusetts graduate, ran a record 15:39.97 at Ellen's in 2018.

"To me," Ratner said following the 2019 race, "the race is about these women who have survived the disease. They're brave and bold and they should be celebrated."