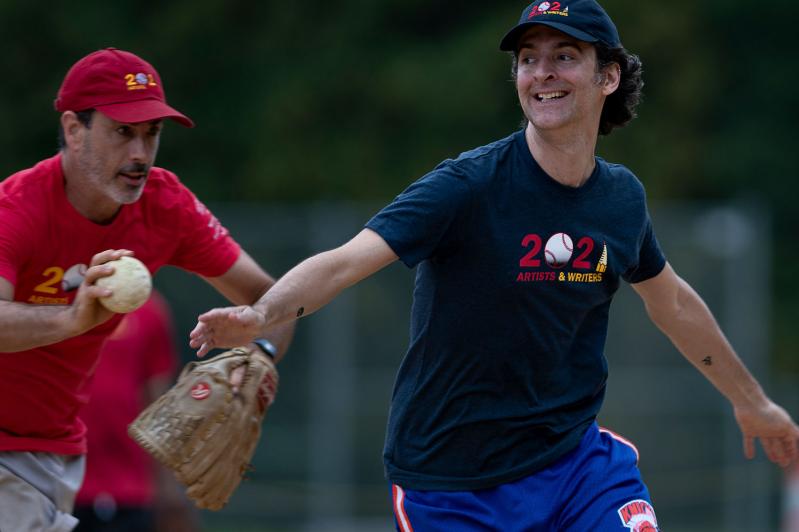 Zack Greenburg, who was caught in a rundown between first and second base that ended the game, took it philosophically.
Craig Macnaughton
By Jack Graves

The subtle but seemingly inexorable transmutation of the Artists from patsies into fire-breathing combatants and of the Writers from world bestriders into languorous layabouts continued apace at East Hampton Village's Herrick Park Saturday as the Artists, victors by 11-9, continued painting a rosy picture in the modern era of "the Annual Agon" that dates, it is said, to 1948.

While the Writers remain solidly in the vanguard in the series over all, the Artists -- whose 93-year-old manager, Leif Hope, has historically portrayed the Writers as twisted loners and the Artists as ebullient lovers of life -- now hold a 17-14-1 edge in games played since 1988, which is to say the Clinton era, for the former president, then the governor of Arkansas, made his first appearance here that year, as a base umpire.

On Saturday, to everyone's delight, he called the balls and strikes for the first several innings, buoyed by the fact that he was "not running for anything anymore," and stayed to be interviewed and to pose for photos with admirers on the sidelines.

The Writers struck first as Andy Friedman, a former M.V.P. and the Writers' cleanup hitter, took Walter Bernard deep into the tennis courts, a Herculean clout that put the Scribes up 3-0. (Interestingly, you could barely make out "Writers" in Bernard's T-shirt logo this year, though the graphic artist ascribed it to happenstance.)

The Artists came right back with two runs of their own in the bottom half. Peter Cestaro, who led off, stroked Paul Winum's second pitch to Carl Bernstein well over the fence in left-center, and, two outs later, Eddie McCarthy, also a former M.V.P., homered to the base of the tennis courts' fence.

Thus the battle was joined.

The Artists' third home run tied the count at 3-3 in their second at-bat, and they took their first lead, at 5-3, in the third thanks to a two-out, two-run single by Antonio Lombardo. The Writers, try as they might, were not to recapture the lead thereafter.

A four-run seventh during which the Writers' fielders looked like the Artists of old and Brian Pfund, a former semipro baseball player, drew the Game's sole walk, seemed as if it would put the finishing touches on, but, to their credit, the Writers gamely tried to rewrite the script in their last at-bats before Zach Greenburg, with the Writers still trailing 11-9, was caught in a two-out rundown between first and second base that wrote finis.

The Artists, however, couldn't settle in the Game's aftermath on an M.V.P. recipient. Indeed, it had been a team effort. Two round-the-horn double plays took the Writers out of the second and third innings, Joe Sopiak struck out Friedman with two on, one out, and the Writers trailing 6-4 in the top of the sixth, and Ed Hollander, who probably should have received the award for the trendsetting threadbare lavender cutoff pants he wore, staked a claim in the eighth, stanching a two-out Writers' rally, successively bobbling, recovering, stumbling, and crawling with the ball Richard Wiese had hit his way to get the third out as runners streaked around the bases.

The Writers protested with gusto, but the chief umpire at the time, Richard B. Lowe III, a New York State Supreme Court judge, ruled that Hollander, with the ball in his possession, had collapsed in a heap on the first base bag before Wiese had arrived.