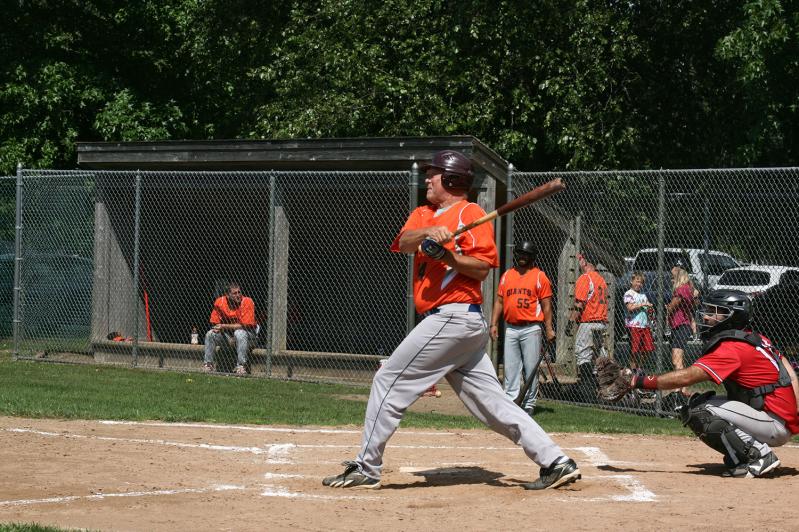 Jim Hansen, One Stop Market's butcher, is one of the top-seeded Giants' heavy hitters.
Jack Graves
By Jack Graves

Pete Barylski of Water Mill and Jim Kinnier of Noyac have long played baseball up the Island, though, when it became increasingly clear that the Nassau teams were no longer interested in driving out here to play, they began an over-30 Hamptons Adult Hardball league of their own at Sag Harbor's Mashashimuet Park in June.

Barylski, 57, who did not begin playing until he was 33, taught himself to pitch using a color-coded ball indicating the fastball, curve, and slider grips that his nephew had given him. Asked this week how the inaugural season had gone, he said, "It's been going well so far, considering it's our first season. It was almost a spur-of-the-moment thing. We put it together in February or March. Four teams with 15 or so players each. . . . There was a lot of rust in the beginning, but lately there've been some great hits and plays."

Barylski's Giants and Tim Pilinko's Krakens (named after the Seattle Kraken ice hockey team), the league's top two, were to have played in a best-of-three final series at Mashashimuet Park this week, with a possible doubleheader set for Sunday beginning at 9 a.m.

The teams had gone 2-2 in the regular season, Barylski said, "though we got the top seed because we'd scored more runs than they had."

The Giants, with Zach Epley, a left-hander, on the mound in the first game, easily turned back Frank Vespe's Reds in a playoff semifinal at the park on Aug. 15.

Barylski noted in this regard that Zach's father, Mark, the former mayor of Southampton Village, had played on a traveling South Fork baseball team he managed in 1999. Nick Epley, Zach's brother, also plays for the Giants, as does Jim Hansen, the butcher at One Stop Market in East Hampton, with whom Barylski has played in the East Hampton Town men's slow-pitch softball league as well, first on Amagansett Wine and Spirits and then on Uihlein's.

Asked if there had been any injuries, Barylski said, "Oh my God, quads, calves, hamstrings. . . . The game on the 15th was Zach's first since fracturing an elbow in a collision at first base in late June. Luckily, it wasn't his throwing arm."

"You really need 17 on a team," he continued. "When the season began, we were three down because of injuries, and one guy was a no-show, so we were down to 13 right off the bat. It's tough, though everybody loves it. . . . We joke around a lot, there's great camaraderie. It's a really good atmosphere."

Barylski said he and Kinnier are giving serious thought to having a fall league, too, perhaps an expanded one, whose games would be played on weekends from "the week after Labor Day through late October."

The league, he said, which fitted its 12-game schedule around games the Hamptons Collegiate Baseball League's Sag Harbor Whalers played at Mashashimuet, is also trying to get a field with lights, though Barylski said the Terry King ball field in Amagansett, where slow-pitch softball games are played under the lights, would be too small. Southampton High School, which has a nice field, was, he added, unlit. He had talked to Fred W. Thiele Jr., the district's longtime assemblyman, and would talk with Southampton Town Supervisor Jay Schneiderman about it.

"Oh yeah," Barylski said in parting, "we'd be happy to have others play. It would be nice to have six teams in the fall league."