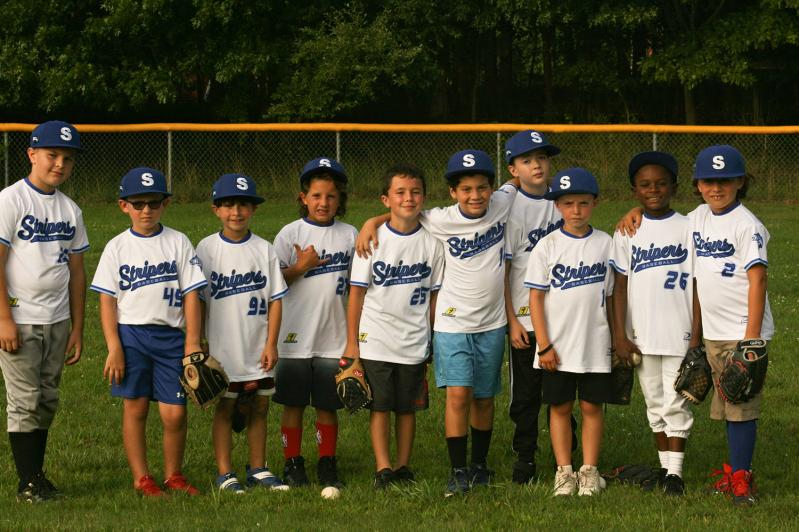 To keep East Hampton in the game, as it were, Mark Danieli is coaching a 7-to-9-year-old travel baseball team, the Stripers, along with Mike DeAngelo, Bobby Yurkewich, and Asa Gosman.
Jack Graves
By Jack Graves

Kelly McMahon Bahi is happy that she doesn't have to travel far so her 8-year-old son, Ryder, can play on a travel baseball team. Because, thanks to the good offices of Mark Danieli, the travel team for kids in Ryder's age group can be found right here, practicing two evenings a week for an hour and a half at one of East Hampton Little League's Pantigo diamonds.

A former University of Arizona catcher who has coached T-ballers and Little Leaguers in East Hampton and Sag Harbor, where he lives now, Danieli said the other day that he was prompted to launch the Stripers -- his son, Marco, provided the name -- in order to get youngsters here who had missed a lot of playing time because of the coronavirus pandemic back on track.

"These 7, 8, and 9-year-old kids had fallen way behind when it came to learning the fundamentals of a game that is not easy -- a game in which one play can make all the difference -- and they were also in danger of missing out when it came to learning and practicing the values a team sport can instill, such as accountability, reliability, sportsmanship, and social etiquette . . . the friendships they're making now can last their entire lives. I still have friends from grammar school and junior high. . . . They'll win together, they'll lose together, but the important thing is that they'll be together."

Bobby Yurkewich, one of the assistant coaches and the father of an 8-year-old son, Grayson, who catches, said Danieli was a knowledgeable and fair coach who neither overpraised nor unduly criticized. He was a good motivator, too, he added, noting that "the golden bat" Danieli had brought to practice one day, a reward not only for outstanding performance but also for outstanding sportsmanship, had been given out only once, thus adding immensely to its appeal.

"It's a 30-inch bat, but gold, I call it the Big Kahuna," Danieli said with a smile. "They all want that bat, they're asking me all the time, 'Who's going to get the golden bat?' But . . . you gotta earn it, and so they're stepping up their games."

There are 11 on the Stripers' roster at the moment, including the aforementioned and Connor Cashin, A.J. Gosman, Jackson Bahel, Leo DeAngelo, John Michael McQuade, Mack Bergstein, Nat Rosen, and Michael Perodin, though more, Danieli said, are welcome.

The 7-through-9-year-old team has its sights set at the moment on a Labor Day weekend tournament in Brookhaven.

The pandemic-caused constraints, Danieli continued, had made it all the more important now that youngsters be prepared through team play for success and for life's challenges.

"You want them to be as successful as they can be so that they'll be able to cope with life's uncertainties. You want to build their self-confidence, their self-esteem, and this time in their lives is a great time to do it. You want to lead them to success -- the rest is up to them."