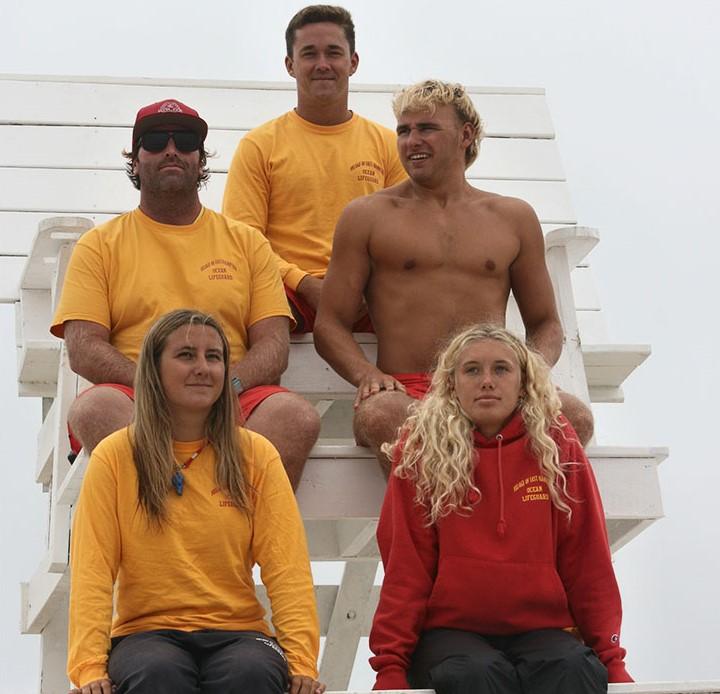 Drew Smith, at left in sunglasses, along with Andrew Wilson, Kevin Bunce Jr. (shirtless), Georgia Plankster, and Halle Kneeland, scanned the water the other day from a new 16-foot stand at East Hampton Village's Main Beach, one of five that Jimmy Minardi is building.
Jack Graves
By Jack Graves

As the newly appointed captain of East Hampton Village's lifeguards, Drew Smith has brought new life to the village's beaches -- a six-plus-mile stretch that spans from Georgica to Two Mile Hollow -- and to Main Beach in particular.

A New York City Fire Department emergency medical technician since 2015, the 33-year-old took a leave of absence in May to take on the village role. With the village board's blessing, he has almost doubled the number of guards this year to 30 ranging in age from 16 to 60, with 15 certified guards on the part-time list. And to assure that interest in lifeguarding remains high, this summer he began a "cadet" program for 15-year-olds.

Smith's own 17-year lifeguarding career here began under the town chief John Ryan Jr.'s aegis, when he was in his junior year at East Hampton High School and their good rapport has strengthened the lines of communication between the town and village when it comes to administering the beaches here. Smith is also quick to praise "the new village administration -- they've been terrific."

"This has been the best year ever at Main Beach -- even the Ryans will tell you that," Chris Minardi, a village board member, deputy mayor, and certified lifeguard himself, said at a recent ocean lifeguard certification and recertification test at Main Beach.

Spencer Schneider, a long-distance swimmer and a member of the East Hampton Volunteer Ocean Rescue Squad, seconded that.

The village has five beaches within its purview -- Georgica, Wiborg, Main, Egypt, and Two Mile Hollow -- with three stands at Main, and one each at Georgica and Two Mile Hollow. "There are no stands at Wiborg and Egypt, but we patrol them with A.T.V.s," Smith said. Thus far, he added, there have been more than 45 rescues at village beaches.

"There's a team atmosphere" at the beaches just like there was when he played lacrosse in high school with Zach Brenneman, Drew Falkenhan, Mark Scioscia, Tyler Maguire, Will Schumann, Bryan Powell, Erik Brierley, and Pat Havlik. "It was the first good group that Ralph Naglieri, Christian Johns, and Mike Vitulli, who was my goalie coach, had." The group played year round, and Smith, who graduated in 2006, went on to play goalie for two years at Adelphi and two at C.W. Post, whose men's lacrosse team won national Division II championships in 2009 and 2010.

After college he obtained a real estate license and sold real estate full time under the banner of Town & Country, whose chief executive officer is his mother, Judi Desiderio.

Main Beach has been a center of activity this summer, what with regular concerts that are staffed by lifeguards, a six-hour-long invitational lifeguard tournament that drew 21 teams, more than ever before, the ocean certification test that drew 64 participants, all of whom passed, and a "battle of the beaches" volleyball tournament under the lights in which town and village guards contended.

Smith, who continues to sell real estate on the side, was convinced that the surge in real estate sales here during the pandemic would bring a concomitant surge in beachgoing this summer, and that "squaring away the beaches would be a high priority."

Happily, he said, "our lifeguards rose to the occasion. They're serious -- they want to be here, they love the job."

One who certainly fits that description is 60-year-old Jimmy Minardi, who is building five 16-foot-high stands from which the guards will be able to better scan the surf for swimmers who might be in trouble.

Jimmy's son, Sky, is one of a number of Main Beach guards who are training more than a dozen 15-year-old cadets along with Jason Brunner, Lucy Emptage, Halle Kneeland, Kevin Bunce Jr., Thomas Staubitser and Matt Kalbacher, the latter two being lieutenants.

In addition, Smith and Bob Pucci, a former East Hampton Volunteer Ocean Rescue chief, have been training lifeguards who want to recertify, as many did during the recent ocean test.

This time of year, he works six days a week. "My phone rings all day, but," he said with a smile, "it's all good. I love the environment the new village administration has created."

Hoedown on the Farm, Cocktails in the Garden
Main Beach Free Concerts in Final Weeks
Services and Counseling After Death of Popular Teacher Assistant
END_OF_DOCUMENT_TOKEN_TO_BE_REPLACED