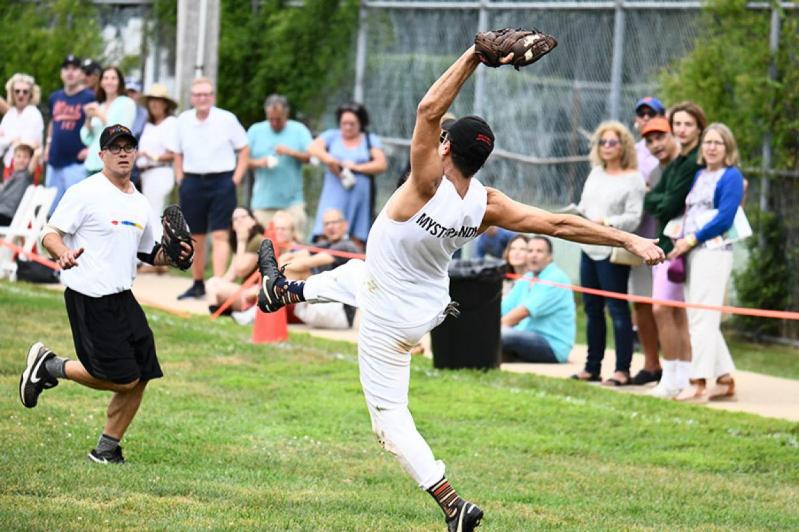 Andy Friedman, the 2018 M.V.P., robbed Chris Wragge of a home run at the fence in the fourth inning of the 2019 game.
Doug Kuntz
By Jack Graves

What is being billed as the 73rd Artists and Writers Softball Game is to be contested at East Hampton's Herrick Park on Saturday at 2 p.m., preceded, at noon, by batting practice.

The Game, which benefits the Eleanor Whitmore Early Childhood Center, Phoenix House, the Retreat, and East End Hospice, began as a madcap summer's romp by artists in Wilfrid Zogbaum's front yard in Springs into which less insouciant writers were soon to insert themselves.

For a number of years now, the Artists having become more serious, and with the Writers often having to grin and bear it, albeit through gritted teeth, the Game has been surprisingly well played of late.

The Artists won the last meeting, in 2019, by a score of 10-8, thus improving Leif Hope's squad to 16-14-1 since 1988, the year that Bill Clinton, then the governor of Arkansas, made his first appearance as an umpire. The former president called the balls and strikes in 2019, and, according to Mike Lupica, who co-manages the Writers with Ken Auletta, Clinton may show up on Saturday as well.