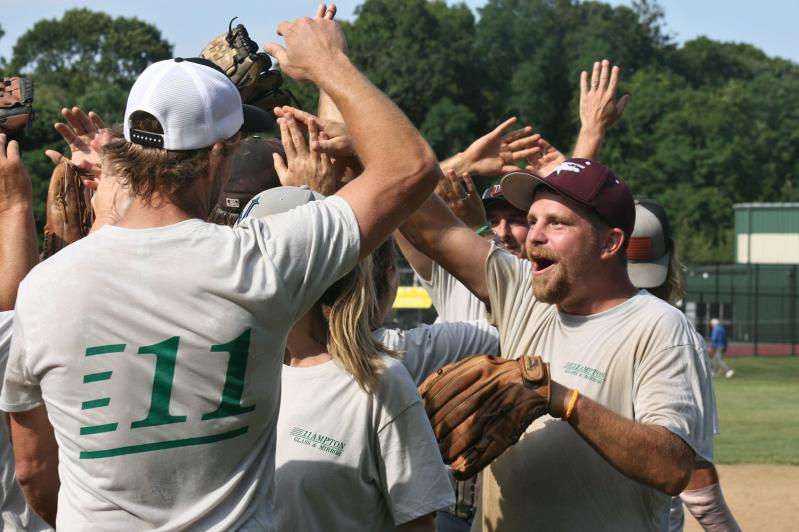 Scott Abran, at right, and his Hampton Glass teammates celebrated after coming from behind to beat Taste Our Sauce 9-8 in a Travis Field tournament game played at the Terry King ball field in Amagansett Saturday afternoon.
Jack Graves
By Jack Graves

Mike Graham, who with a number of the late Travis Field's friends began a coed softball tournament in his memory 13 years ago, said Monday that this year's tournament had drawn more teams than ever -- 18.

The tournament, whose proceeds fund college scholarships here, had been "extremely well attended," he said, even though some of its 35 games were played in the Amagansett rain.

"The community came out. It was great to see so many new faces -- it was an amazing weekend, and it was the first time we've had two teams come out of the losers' bracket to win," Graham said of the Bad News Bubs in the A bracket and Action Irrigation in the B bracket.

A number of the Bad News Bubs, a team that had dropped a first-round game to the Pink Panthers last Thursday, had played with Travis Field on the East End Tigers, the top semipro baseball team on Long Island in the mid-2000s. Given that it was a double-elimination tourney, the Bubs had to beat the Panthers twice in a row on Sunday night, which they did, by scores of 9-2 and 7-4. Doug Dickson, the Bubs' pitcher, presumably deserved a lot of the credit.

Andy Tuthill, a former East End Tiger who pitched for the Panthers, said the Bubs had fielded well and hit throughout the lineup, which included Vinny Alversa, the Rodriguez brothers, Mike and Andrew, Will Collins, Brian Turza, and Brendan Fennell.

It was the second championship in a row for Ryan Balnis's Action Irrigation, whose roster included Will Harden, Earl Hopson, Greg Martin, Devin O'Brien, and Austin Vecchio, who pitched.

The Bubs-Panthers finale finished up at around 11 p.m., said Graham, who, along with Kelly McKee, Henry Gant, Matt Zappoli, Matt McHugh, Brian Anderson Jr., Riley Duchemin, Tuthill, and Austin Bahns, among others, handled the umpiring duties.

Brian Anderson Sr. was the announcer, and Mike McGuire and his sons, Mikey and Chris, "kept the field together." The Field family worked in the food tent and sold T-shirts, caps, sweatshirts, sweatpants, and raffle tickets in the Terry King ball field's parking lot. This year's Travis Field scholarship winners were Hannah Hartsough, Eva Wojtusiak, and Dawson Lenahan.

Going into Sunday night's decisive game, the Panthers had won four championships in a row, dating to 2016. There was no tournament last year.

The tournament, the A bracket in particular, drew some strong entries, some of which, Taste Our Sauce, Hampton Glass, and Nico's Pools among them, didn't make it to the final. Taste Our Sauce was essentially the McMahon's entry in the East Hampton Town men's slow-pitch softball league, that league's defending champion. Nico's Pools had players from the Clubhouse, the slow-pitch league's first-place team at the moment.

The Jetty Grinders got the nod as the team with the best jerseys.

Tuthill said that he was glad the tournament was back. "It was nice to get some normalcy back in our lives. The turnout was great. In the end, it was all fun. We're all looking forward to next year."