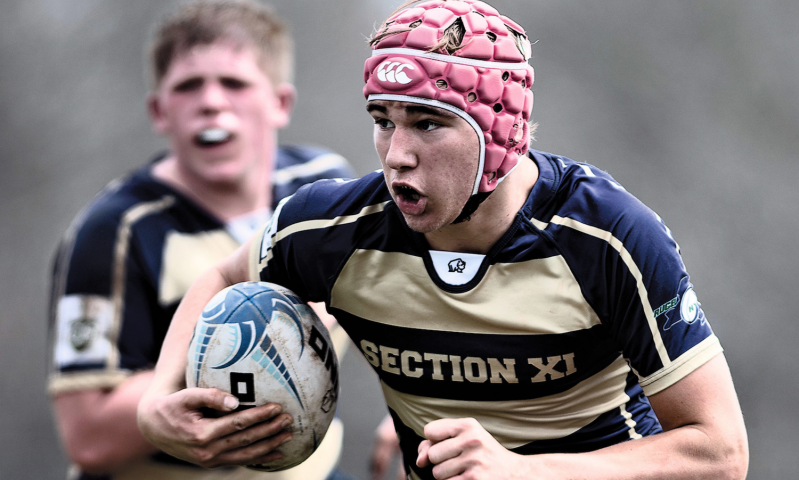 When he was in seventh grade and new to rugby, Kevin Bunce Jr. was tapped by an older player on East Hampton's youth side to go in for an injured player.

Which he gladly did, though today he can't remember what position he played, though he does remember being "rocked."

And yet loving it. "Soccer, wrestling, football, no matter which of those sports you play, rugby is totally addictive -- it's called 'the rugby bug,' " the Mount St. Mary's recruit and East Hampton Village lifeguard said during a conversation at East Hampton's Herrick Park Friday evening after he'd got off duty at Main Beach.

That he knew 50 rugby players his age who would gladly put him up at a moment's notice testified to the camaraderie that the sport engendered, said the recently graduated East Hampton High School senior, whose cousin, Mike Bunce Jr., has played with clubs all over the world.

Kevin's father, Kevin Sr., has, with Mike Jablonski of Mattituck and Rich Brierley of East Hampton, overseen youth rugby development here and in eastern Suffolk for years, though lately, largely because of the coronavirus pandemic, the connection that had existed between the older and younger kids has been severed.

Apparently the last time the Section XI Warriors took the field was in the spring of 2019. Kevin Jr. figured prominently in a 65-29 rout of Bishop Loughlin Memorial High on April 7 of that year, scoring two tries (rugby's equivalent of a touchdown) and making good on half a dozen conversion kicks. He was to have played the following week in an international youth 7s tournament in Orlando, Fla., but a broken collarbone kept him from doing so. (Thanks to Bruce Cotter, he lifts weights in the Sag Harbor Gym to strengthen his shoulders.)

Though two seasons were lost to the pandemic -- the Warriors were just about to launch a campaign in March 2020 when the coronavirus brought a halt to everything sportive here -- Kevin Jr. has played in a sufficient number of tournaments to attract the attention of college coaches -- the attention in particular of the Mount's head rugby coach, Jay Miles, who recruited him after seeing him play in his sophomore year against Mount St. Mary's feeder school on Randalls Island.

Bunce, who has played every position but expects either to play on the wing or at flanker on the Mountaineers' 15s side this fall, is one of some 40 incoming freshmen who have been brought to the Mount with the idea of contending again with such schools as Cal-Berkeley, U.C.L.A., and Penn State, "the big dogs," for a national Division 1 championship.

He will play 7s, rugby's quicker, more pared-down version, too, probably at inside center, which will give him plenty of chances to dodge or pass in one-on-one situations.

Kevin Sr. said that the Mount had won national titles in 15s and 7s when Brandon Johnson, one of his East Hampton proteges, was there not long ago. Johnson is now playing semiprofessionally with the Austin Huns in Texas.

"I looked up to all those guys when I was a sixth grader," Kevin Jr. said. "Brandon and Jordan [Johnson], Axel Alanis, George Calderon, Jackson Rafferty, Josh King. . . ."

It seems that Bunce was born at the right time: The popularity of collegiate and club rugby in the United States continues to grow, Major League Rugby has been in existence for five years now, and Old Glory DC, one of Major League Rugby's 12 teams, is affiliated with Mount St. Mary's.

Should he do well at the college level, presumably he will move up the ladder.

"People ask, 'Why play rugby?' " said Kevin Sr. "Well, here's why. You can get a college scholarship. You can, if you're good enough and work hard enough, play all over the world -- you can go places."