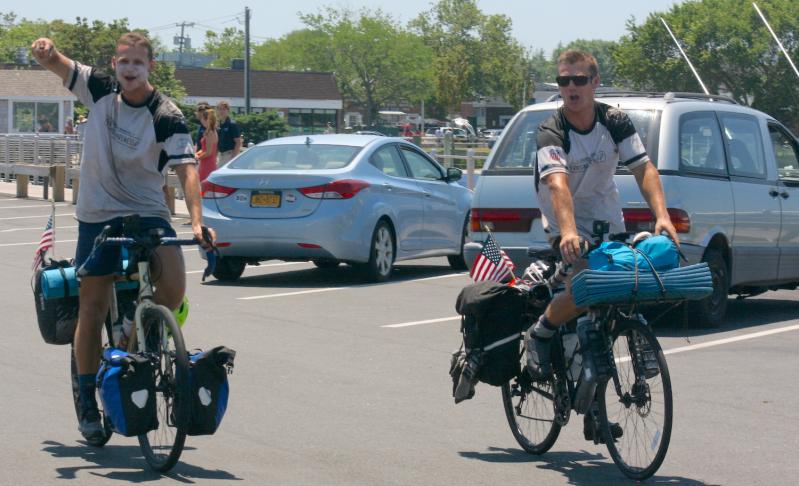 "It's a beautiful . . . big country with good people everywhere," Drew Harvey said after having ridden 3,400 miles across the United States' northern tier in 30 days. With a University of San Diego classmate, Payton Dwight, he traveled from Anacortes in Washington State to Sag Harbor, Harvey's hometown, to raise money to build pull-up and parallel bar fitness stations under the Dawgpatch Bandits' banner. Not unlike the one the Bandits have dedicated in Mike Semkus's memory behind Pierson High School.

Riding steel-frame Salsa touring bikes that carried single-person tents, sleeping bags, bed rolls, and everything one needs to repair a bicycle, the 24-year-olds, after being given an escort down Main Street by Sag Harbor Police Chief A.J. McGuire, were greeted by a crowd of about 30 well-wishers, including Harvey's parents, Dawn and Dave, at the end of Long Wharf at 1 p.m. on June 30.

In the crowd of welcomers was Jimmy Beh, 28, a fellow University of San Diego alum who had set off from Anacortes with Harvey and Dwight, but who had to drop out on the 10th day, in Montana, after falling over the handlebars when his chain caught while he was pedaling uphill. He had to get stitches and his bike was totaled, but he didn't want to stop. Although an emergency clinic doctor, worried about possible infection and an abdominal protuberance, said he must.

The mood was not only giddy because Harvey and Dwight had spanned the country -- averaging 117 miles per day and sleeping every night under the stars -- but also because in that time they had exceeded their goal of $50,000 in donations that will enable the Bandits to build 10 more fitness stations -- perhaps several on the East End -- like the one dedicated to Semkus, a Sag Harbor teacher, coach, lifeguard, and triathlete who, addicted to opioids that had originally been prescribed to lessen pain caused by a soccer injury, died of an overdose in 2016.

"We formed the Dawgpatch Bandits in reaction to Mike's death," Harvey said during a conversation at The Star the day after their return. "We wanted to do something really positive in his memory, and also we wanted to memorialize a college friend of ours, Anthony Grasso, who also fell victim to opioids. All of us," he said of Dwight, Beh, and himself, "have known people who have passed away from opioid overdoses. It's still a very prominent problem. More people are checking into rehab and admissions are up. . . . We're pushing fitness as a positive outlet."

"Replacing a negative addiction with a positive one," said Dwight.

Actually, this was Harvey and Dwight's second cross-country cycling trip, the first, a fund-raiser for the Mike Semkus and Anthony Grasso fitness stations, having spanned San Diego and Sag Harbor three years ago.

That 3,400-mile ride had taken them, said Harvey, through deserts, along interstates, and through urban areas. They had slept mainly in motels. "We were relatively inexperienced and were figuring out stuff then," Harvey said. "This time we knew what our nutrition needs would be, what our water needs would be, and we knew how to deal with adversity on the road. The big difference with this trip is that we stayed on the back roads. There were a lot fewer people and a lot less traffic, but long miles, bigger days."

"We met incredible people, people who were really interested in what we were doing. People were making donations along the way, a lot were covering our meals. . . ."

"No, nobody tried to run us off the road. They could see we were serious cross-country bikers. We were carrying all of our gear, we had no support van, we had American flags on the back. The truckers waved, we waved. . . ."

Harvey then ticked the states off: "Washington, Idaho, Montana, North Dakota, Minnesota, Wisconsin, Iowa, Illinois, Indiana, Ohio, Pennsylvania, New Jersey, and New York. The views in Washington and Montana were unbelievable, there were beautiful little towns in Wisconsin, the scenery was wonderful along the Mississippi, and Pennsylvania was by no means flat."

Had they seen any bears?

"We met some of the greatest people you'd ever want to meet," said Dwight. "They live differently . . . more purely. They're genuine, they're interesting, they're not in a rush. They're genuinely interested in what you're doing. They wanted to hear about the ride, about our campaign, and they told us a little bit about their lives over coffee. They're the backbone of the country, farmers, producers."

In a corner of the athletic field behind Pierson High, an engraved plaque on a large stone near the set of steel parallel bars and pull-up bars upon which a variety of body-strengthening exercises can be done quotes Mike Semkus as saying his ambition was "to be a positive role model, to have a loving family, and to affect people the way I have been affected by the people I love. To be remembered."

Underneath, the Dawgpatch Bandits have written: "From all of us whom you have affected. . . . We will remember you."

"The first fitness station we put up was in memory of Mike," said Harvey. "We're using that as a model for the others. So far, we've got three up, at Pierson, at the Long Island Center for Recovery in Hampton Bays, and in Holtville, California, 100 miles east of San Diego, near the border. . . . Why there? Because Colby -- we don't know his last name -- gave us a spot to camp out there three years ago and a good meal, and we remembered."

"We might put one up in Greenport possibly, and possibly one or two in East Hampton and Southampton. Ultimately, we'd like to put one up in every state."