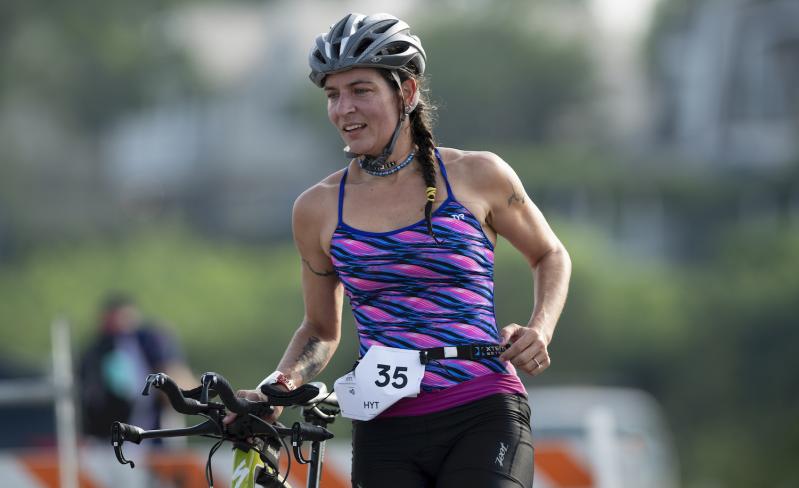 Heather Caputo, who gave birth to a daughter, Lucy, in December, was first out of the water and first in on the run at the Hamptons Young at Heart triathlon benefiting the I-Tri program at Long Beach Saturday.
Craig Macnaughton
By Jack Graves

Absent from the summer's sports scene last year, triathlon competition returned to the South Fork last weekend, with one on Saturday at Long Beach in Noyac that benefited Theresa Roden's award-winning I-Tri program for teenage girls and one on Sunday with a dramatic finish at the Montauk Lighthouse.

It was the seventh win at Montauk for Eickelberg, a professional triathlete, who last won here in 2016. Obviously, he has lost nothing in the interim, for his time Sunday was a minute and 13 seconds faster than his winning time here five years ago.

Speaking of swimming, Caputo swims in the ocean year round here with a group that includes Jeremy Grosvenor, Spencer Schneider, and Mike Bottini, whose brother, Bob, 63, was the Young at Heart Triathlon's runner-up and the first male finisher, a first for him.

"Swimming through the winter, like they do, is too much for me," Bob Bottini said, when asked if he ever joins the hearty group. "The latest I was in the water this year was in early November."

With a background in marketing and business development, he has, since moving out here full time last fall, been helping to further spread the word about I-Tri's confidence-building work with teenage girls. "It's a great organization with a wonderful mission," Bob Bottini said, adding that competing in Saturday's triathlon, which Roden had recently told him about, was "icing on the cake for me."

Customarily, large contingents of I-Tri girls -- the group numbers around 200 at the moment spanning Montauk to Mastic -- compete in the organization's triathlons, but the girls' training lately has been limited to virtual sessions.

Consequently, "we decided to limit the entrants this year to 15 and up," said Roden, who, for the first time, was one of the event's participants. She added that the program hopes to resume full in-person activities in January, and that the girls who missed out on Saturday will be able to compete in this event next summer.

There were, however, five I-Tri alums in the triathlon, among them Abby Roden, Tali Friedman, and Sierra Davidson, 17, a Westhampton High School senior. Davidson is the daughter of Amanda Foscolo, one of I-Tri's coaches, and is being recruited by Northern Vermont University's triathlon coach. Following in her mother's footsteps, her focus recently has been on long-distance swimming. The two of them did the Bermuda 10K swim in 2019. Sierra's performance in that race, her mother said, piqued the triathlon coach's interest.

Davidson was second out of the water on Saturday, Caputo being the first out, which, she said, "wasn't surprising."

Caputo's daughter Lucy "turned seven months yesterday," Caputo said Monday morning. "She went to both of the triathlons -- she and Dennis [Fabiszak] were my cheering squad."

Caputo also has a 7-year-old daughter, Annabelle, who's "a fish." As for the other triathletic legs, "she likes biking, but organized running not so much. She runs though, always has."

Caputo was surprised she'd done so well in the triathlons considering that her training has largely been "in the basement, on a treadmill or a stationary bike. . . . The last triathlon I did was the Montauk Sprint in 2016."

She has in recent years been bothered by periodic numbness in her left leg, "an arterial issue" that surgery in 2019 improved to some extent, but it did not completely abate. Because of that problem, "I essentially compete against myself . . . it bothered me [at Long Beach] and in Montauk. No, it didn't stop me. I can keep going, but not fast."

Caputo swam in the ocean until a couple of days before Lucy was born, on Dec. 18.

"I think she benefited from it," Caputo said. "I know I did. I was warmer when I was pregnant. She was like a little insulator. . . . She loves the water, by the way."

Asked if she would compete again in the Memphremagog Winter Swimming Festival in Newport, Vt., at the end of February -- races are contested in a 25-meter "pool" carved out of the lake's ice -- Caputo did not hesitate. "I can't wait," she said with a laugh.

Behind Caputo and Bottini in the top five at Long Beach were Maria Harber, 51, of Eastport, Sara Dimmick, 42, of Sagaponack, and Kim Covell, 58, of Water Mill.