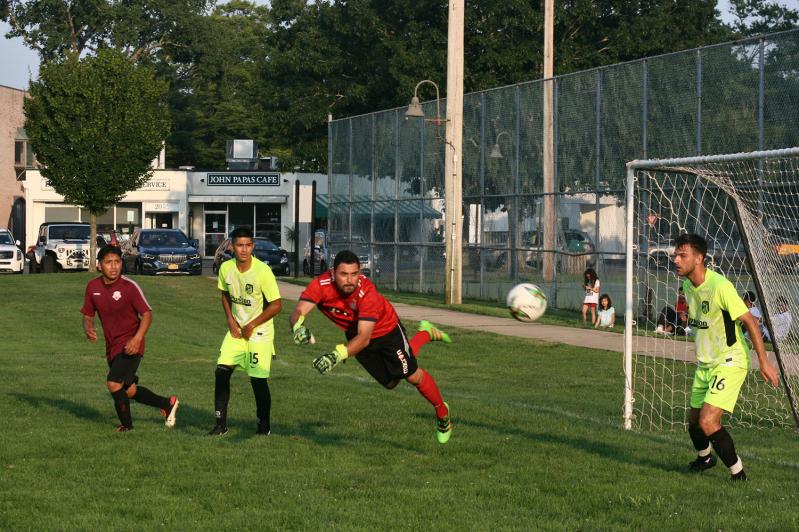 Going into this week's play, John Romero Sr.'s team, which has won 15 championships since commencing 7-on-7 competition in 2008, led the league with six wins, one loss (to the East Hampton Soccer Club), and one tie.

The top four are to make the playoffs, with the semifinal-round games to be played on Aug. 5 and the championship game on Aug. 12, both at 7 p.m.

The last time Maidstone and the Soccer Club met, on June 10, the latter won 1-0 thanks to a second-half goal by Justin Carpio, though Maidstone played the first half two men short, and was a man-down when Carpio nudged the ball over the line at the right post as Alex Mesa, Maidstone's agile goalie, had been lured out to the left.

The teams were even up this time around, and, predictably, it was a good game. Nick Escalante, Maidstone's high-scorer thus far, scored early on, blasting high up into the nets a left-to-right shot from close range.

Continuing to bull his way through the defense, Escalante was presented with several more opportunities before the first half ended, but they came to naught.

Early in the second half, Carpio came up with a steal and fed Mark Bako, who put a shot by Mesa, knotting the score.

Soon after, Bako, again on the move, was taken down by a defender in the penalty box, which resulted in a penalty kick from seven yards out that Bako's teammate Sebastian Fuquen buried.

Near the game's end, it was Bako's turn to err as he knocked down an onrushing Maidstone forward from behind. Escalante took the penalty kick, hitting a low hard shot to the right side that Griffin Lohr, the Soccer Club's goalie, could not catch up to.

And that's how it ended, at 2-2, for in regular season games there are no sudden-death overtime periods.

Both goalies, Mesa for the Market and Lohr for the East Hampton Soccer Club, had five saves.

Last Thursday's second hourlong game also ended in a tie, at 3-all, between F.C. Palora and Tortorella Pools. Eddie Lopez, Maxwell Labadie, and David Rodriguez Jr. scored for Tortorella, and Rodriguez also had an assist. The scorers for Palora were Bryan Cueva, Santiago Gutierrez, and Michale Montes de Oca. Cristian Munoz, Tortorella's goalie, had six saves; Diego Pitirris had five for F.C. Palora, which is a new entry this year.

In F.C. Tuxpan's easy defeat of Sag Harbor United, Jack Parker had a hat trick and Faustino Meza scored once. Donald Martinez and Christian Neira each had two assists.

Three games were to have been played at Herrick Monday night, with Tuxpan versus Tortorella in the first at 6:30, with Sag Harbor United pitted against the East Hampton Soccer Club at 7:25, and with F.C. Palora and Maidstone Market contending in the finale at 8:20.

The regular season is to end this coming Monday, with the following matchups: F.C. Tuxpan versus Tortorella Pools, Sag Harbor United against the East Hampton Soccer Club, and F.C. Palora taking on Maidstone Market.

Stuffed With Turkey? Walk It Off
Blood Drive Tuesday in Bridgehampton
Holiday Lights and Charitable Efforts in Montauk
END_OF_DOCUMENT_TOKEN_TO_BE_REPLACED