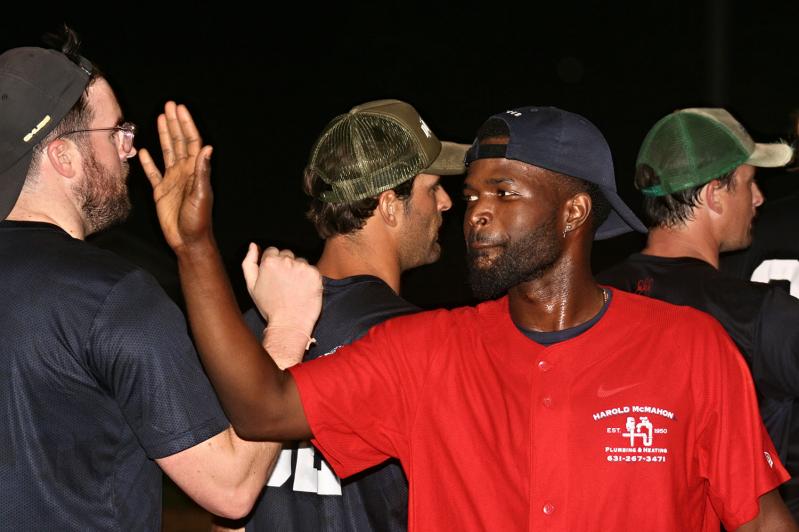 The teams that contested the final series of the East Hampton Town men's slow-pitch softball league last summer met for the first time this season at the Terry King ball field in Amagansett on July 9, with the Clubhouse, the 2020 runner-up, soundly defeating McMahon's, the defending champion, 16-8.

With Joe Sullivan, Chris Pfund, Andrew Foglia, and Zach Brenneman batting back-to-back-to-back as the number two, three, four, and five hitters in its lineup, it's hard to imagine that the Clubhouse lost out in the playoffs' final series last year. But on July 9, McMahon's was minus its starting pitcher, though Riley McMahon did creditably in his stead.

McMahon's, the visiting team, as it were, started off well: John Pizzo, the leadoff hitter, ripped a single to left and beat the throw to second, after which he scored on Pat Silich's sac fly.

David Moss, McMahon's cleanup hitter that night, stirred up a breeze in swinging mightily and missing a high-arced Ray Wojtusiak delivery, but put the next offering into the parking lot behind the left-field fence with one out in the top of the fourth. Maykell Guzman followed with a double, but subsequent flyouts by Pete Vaziri and Ryan Joudeh left Guzman stranded on third.

The Clubhouse effectively put the game away with an eight-run fourth during which Brenneman hit a two-run homer, Rick White drove in two with a hard-hit single, and during which McMahon infielders committed three errors.

A run-scoring base hit by McMahon and a three-run home run by Pizzo narrowed the gap to 14-6 in the bottom half. McMahon's -- and Riley McMahon, who issued leadoff walks to Diego Palomo and Sullivan -- escaped without further damage in the bottom half thanks to a flyout to center field by Pfund and a 6-4-3 double play that began with Pizzo's deft one-hop grab of a shot hit at his feet by Foglia.

McMahon's added two more in the top of the sixth. Moss singled, and a cue shot by Guzman escaped the grasp of Palomo, who'd been drawn off the first base bag. Vaziri, who hits six in McMahon's lineup, drove in Moss with a single, and after Joudeh flied out to left, Jeff Cimbalista's short-to-first groundout enabled Guzman to score from third.

A six-run lead in slow-pitch is not insurmountable, and, knowing that, the Clubhouse didn't let up in the bottom of the sixth, Brenneman leading it off with a line drive to the fence in right, after which he circled the bases for an inside-the-park home run abetted by an overthrow of third.

Hayden Ward, the next up, reached first base safely as the result of an error by Pizzo at short -- his fourth miscue of the night. A grounder by Keith Steckowski that Moss, the second baseman, couldn't handle put runners at the corners for Wojtusiak.

Moments later, Ward scored the Clubhouse's 16th run as Silich, after gathering in Wojtusiak's grounder to third, forced Steckowski at second. White then made a credible bid for a home run, but his deep fly was hauled down with a one-handed catch close to the left-field fence, after which Sonny Sireci grounded out third-to-first.

McMahon's went quietly in its last at-bat, with McMahon, Jamie Wolf, and Pizzo flying out successively to center field.

Judging from their postgame mood, though, McMahon's players were not cowed. "We're still the reigning champions," Vaziri said with a smile.

The Clubhouse and McMahon's are not to meet again until the last week of the regular season, on Sept. 15.

Stuffed With Turkey? Walk It Off
Blood Drive Tuesday in Bridgehampton
Holiday Lights and Charitable Efforts in Montauk
END_OF_DOCUMENT_TOKEN_TO_BE_REPLACED