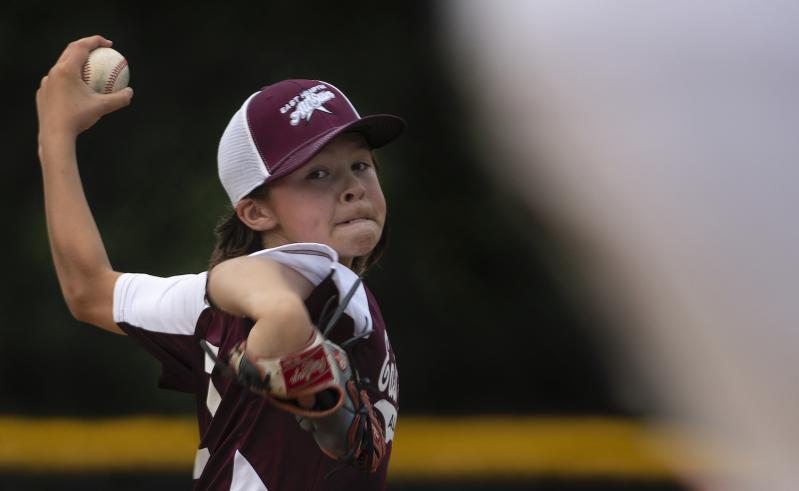 Kai Alversa, who could have played for Bridgehampton's junior high baseball team this spring, but chose instead to continue with Little League ball, struck out 14 of the 17 batters he faced in a District 36 playoff game with Southampton at the Pantigo fields here on July 6.

"I have to think there have been a couple of other 'no-nos,' " Erick Bock, one of the East Hampton 11-12 traveling all-star team's coaches, said following the impressive 7-0 victory, "but it's something else to do it in a playoff game."

Bill Becker, who for two decades headed up East Hampton's Little League organization before and after its expansion some 40 years ago, said he couldn't remember an East Hamptoner throwing a no-hitter in Little League ball, "and certainly not in a playoff game."

"You know, I coached Vinny in Little League, on the Montauk Lions," he said of Vinny Alversa, Kai's father and East Hampton High's varsity baseball coach. "I'm very happy for Vinny -- he was so into baseball."

Kai, a slim, curly haired left-hander, relies on a moving fastball but also "has a good curve and changeup," Bock said. "He's an amazing talent. Actually, the best game by far that I've seen him pitch all season was against Longwood," a playoff game that East Hampton, after leading 4-1 going into the bottom of the fifth, wound up losing 8-4. "Longwood was a tougher team than Southampton -- it was an incredible performance."

On July 6, Kai struck out the first batter to face him, but walked the second with the count full, the sole walk he was to issue that evening. After striking out the number-three man, the cleanup hitter grounded into a forceout at second base.

By the time Jackson Carney came on to pitch in the top of the sixth, Kai had struck out eight straight batters before the cleanup hitter grounded out second-to-first to end the visitors' fourth, and had registered four more consecutive strikeouts before he was removed from the game with 20 pitches left on his allowable 85-pitch count.

Not only did East Hampton's 11-12s, whose playoff record was 1-2 going in, need to win on July 6, but they also needed East End to beat North Shore that night in order to continue on in the district tournament.

The senior Alversa, Bock, and Jason Biondo, the 11-12 team's coaches, didn't know at the time the outcome of the East End-North Shore game, and were hoping that Kai could be used to some extent if the Bonackers were able to advance.

In relief, Carney, who "has a devastating curveball," Bock said, got the second out in the sixth on a short-to-first groundout and capped the 7-0 no-hitter by way of an infield popup.

East Hampton took a 2-0 lead in the first inning on back-to-back doubles by Carney and Trevor Meehan, who, after Alversa grounded out 6-to-3, advanced to third, and, with Tucker Bock, the catcher, up, scored on a passed ball.

The Bonackers effectively put the game away with a five-run third during which Alversa singled in a run and Bock doubled in two.

Kai had deserved better in the hard-luck loss to Longwood, the elder Bock said, citing errors and miscues, not Alversa's pitching, as the cause. The other loss, by a score of 2-0, had come at the hands of North Shore. "We only had one hit in that one."

Jason Biondo, who coached the Hammerheads to a "world series" title here in the regular season, said before the July 6 game began that North Shore's reputation as a perennial District 36 power had perhaps led his and Alversa and Bock's charges to overestimate that team, the first it was to face in the tournament.

"One thing for sure, East Hampton High School baseball is going to be very exciting for the next six, seven, or eight years," said Bock. "There are a lot of really good kids who will be coming up."