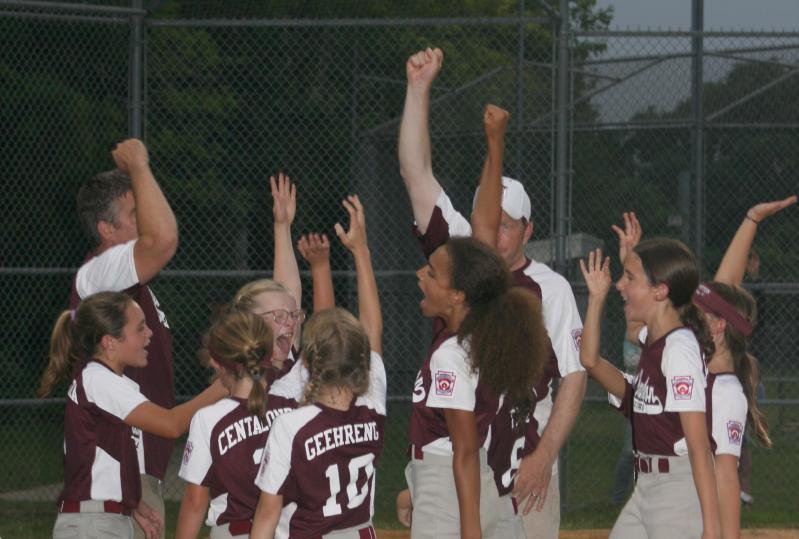 "No pressure," the all-star team's head coach, Jeff Tupper, said to his feisty group before the game began.

And, and under cloudy skies, indeed they did, though the onslaught didn't begin until the top of the second inning (East Hampton was the away team that night), after having fallen behind 3-0.

Dylan Centalonza, a left-hander, was the starting pitcher but gave way to her twin, Fallon, after facing four batters in the bottom of the first, by which time E.S.M. led 2-0.

With runners at second and third and one out, Fallon retired the seventh hitter on a fly ball to Peyton Prado in shallow left and, after a passed ball allowed a third run to score, notched a strikeout to end the inning.

East Hampton came right back in the top of the second. Dylan Centalonza drew a walk to lead off, and Jackie Geehreng singled, sending Centalonza to third, prompting cheering from the dugout.

Two strikeouts followed, but Ella Field, who bats ninth in the lineup, came through with a run-scoring base hit to the right side, after which, with Cadence Page up, she circled the rest of the bases on an overthrow. Page was to strike out, but Field's crowd-pleasing dash had tied the score at 3-3.

From there on it was East Hampton's game.

Two strikeouts and an infield groundout took the visitors out of their half of the second; East Hampton tacked on four more runs in the top of the third, with Alexa Schaffer, Fallon Centalonza, and Prado getting r.b.i.s.

Eastport-South Manor got one run back in the bottom half of the third, but the young Bonackers scored three in the top of the fourth for a 10-4 lead.

An infield fly rule call during that inning was rescinded when Justin Geehreng, the first base coach, argued persuasively that no force play situation existed when the call was made. With runners at second and third and no outs, Fallon Centalonza struck out, but Dylan drove the ball to the right side of the infield, and in the ensuing consternation two more runners crossed the plate.

Schaffer was brought on in the bottom of the fourth to close things out. She fanned the first batter to face her and gave up a single to the second. The defensive play of the night followed as Dylan Centalonza, who had replaced Schaffer at shortstop, caught a line drive hit her way and promptly doubled up the runner at first, to the delight of her teammates and the crowd, which included parents, grandparents, and at least one great-grandparent in the person of Jimmy Field.

The rout continued as East Hampton sent 10 batters to the plate in the fifth, tallying seven runs, three of them coming home on an inside-the-park homer by Dylan Centalonza.

Eastport-South Manor scored its fifth run in the fifth, but it was too little to avoid an invocation of the mercy rule.

East Hampton, which had defeated E.S.M. 7-1 in their first meeting, had thus won its first district softball title in eight years.

The story had a less happy ending on Saturday, when the 9-10 girls Little Leaguers lost 12-2 to Smithtown in a sectional game.

The Bonackers were to have played at East Meadow in the double-elimination tournament Monday.