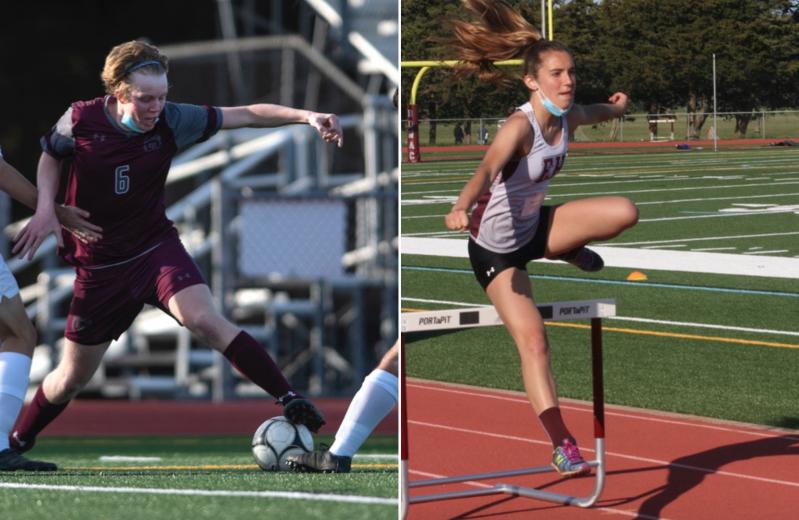 In an athletic awards dinner held recently at the Clubhouse in East Hampton, Bella Tarbet and Matthew McGovern were cited as winners of the Paul Yuska Award, given to the best athletes of East Hampton High School's senior class, and Hall of Fame picks who were to have been inducted last fall but weren't because of the coronavirus pandemic received recognition again.

The awards that McGovern, whose soccer team made it to the county final, and Tarbet, who recently competed in the pentathlon in the county championships and was a member of a county-champion cross-country team, won were not limited to athletics. She was a News 12 Long Island scholar-athlete and a recipient of the plaque given to a two-sport athlete with the highest grade-point average.

McGovern, with Anna Hugo, won the New York State Public High School Athletic Association's Zone Award, given to a physical education student with outstanding leadership qualities. And, with Tarbet, McGovern was a recipient of the countywide Butch Dellecave Award for having athletically represented the East Hampton community in an exemplary fashion.

Among other awards given out that night, Lucia Ibrahim won the four-year Kendall Madison Foundation's mentoring scholarship.

Engstrom, a cross-country and track standout, and Luc Campbell, who played volleyball and ran track, received New Public High School Athletic Association gold keys, awarded to "athletes who letter in eight sports at the junior varsity and varsity level between their sophomore and senior years."

Katrina Osterberg (volleyball, basketball, and softball) and Manny Vilar (cross-country and track) received the U.S. Marine Corps scholar-athlete award, for those playing two sports who had the second-highest grade-point averages.

Asha Hokanson (soccer and lacrosse) and Campbell won the Athletic Director's Award, "given to athletes who have shown dedication to the four Cs of our athletic philosophy -- character, civility, citizenship, and competence."

Paige Cordone won the Molly Cangiolosi outstanding female student-athlete scholarship, which goes "to the female athlete who exemplifies the 'Molly' attitude toward life."

And Aiden Cooper won the James P. McNally Jr. scholarship, "given to a senior athlete in recognition of outstanding sportsmanship, citizenship, and character."

Gardner, who is a member of the National Wrestling Hall of Fame and of Franklin & Marshall College's Hall of Fame, made his name at Mepham High School in Bellmore. From 1937 to 1958, when he left to revive Gettysburg College's program, Gardner's teams amassed 254 wins vis-a-vis five losses and one tie. Mepham during that period enjoyed 100-match and 130-match win streaks. He spent his retirement years in East Hampton.

Baker, who is nationally ranked in badminton, was a four-year starter on the school's first golf team and on the baseball team, and played on the 1965-66 championship boys basketball team, which is already in the Hall of Fame.

The 1965-66 year was a fine one athletically, producing championship teams in football, basketball, baseball, and wrestling.

Miller was a runner-up and Schulte was a fourth-place finisher in the county championships, Miller, Schulte, Albert, Metz, Sucsy, McDonald, and Stephen Cary won league championships, and Bahns and Geehreng were league runners-up. The team was 7-0 in league competition, defeating its opponents handily, and was 9-1 over all.

Tom McGintee, a 1997 graduate, was an all-county baseball center fielder who went on to play the sport at Davidson College in North Carolina. In his junior year at East Hampton, McGintee set two school records, finishing the season with a .512 batting average and 11 doubles. He also played volleyball for four years and was a member of an all-county relay team in winter track.

Rubenstein, a 2004 graduate, was a high school all-American and was the East Coast's top-ranked 18-year-old when he played tennis here. In his junior year he led East Hampton to its first-ever county boys tennis championship. He went on to play tennis at the College of William & Mary in Virginia, leading that Division 1 team as a freshman to a conference championship, its first in a number of years.

Also while at East Hampton, Rubenstein, who manages the East Hampton Indoor/Outdoor Tennis Club, was all-league in basketball and was a member of the 2002 county-champion cross-country team.

The Hall of Fame nominees are to be inducted at East Hampton's homecoming on Oct. 16.