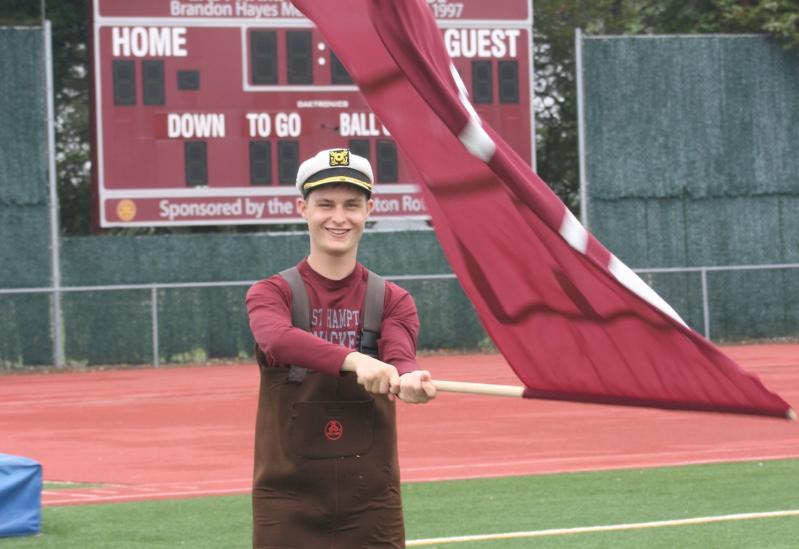 At Hofstra, Jake Epstein will major in video, television, and film, and will audition for the school's "Thursday Night Live."
Jack Graves
By Jack Graves

It was on that day that he suffered a severe concussion when the bat a junior varsity baseball teammate was swinging during warmups hit him full force in the back of the head. He had been scheduled to pitch that day -- he has not played since.

"From March of that year into the fall of my junior year, I had to lie down in a dark room," he said during an interview on the eve of his class's graduation ceremonies Saturday.

"It was really a trial. I felt very depressed and alone. I couldn't play baseball anymore, I missed being with the team, I couldn't watch a computer -- sometimes even now I have trouble with computers -- I couldn't read books, I couldn't comprehend a board game. . . . I was alone with my thoughts."

And the more he thought, the more it became clear to him that he should open up rather than close down, that he should, as psychologists had been suggesting, turn his affliction into an opportunity.

"I thought if I'm feeling like this, I don't want anyone else to feel that way. That's what led me to become the Bonac mascot. The doctors had said that while I couldn't play baseball, I could run around, and so in the fall of my junior year I began cheering the teams on, all of them, beginning with volleyball and basketball, wearing the waders that Mr. [Josh] Brussell used to wear."

"I couldn't play sports, but there was nothing stopping me from waving a flag and screaming. I just kept doing it, and it was fun being a part of the games and cheering. I think everyone should cheer on our teams. I had come to realize that it was all about caring for people and trying to make them as happy as you can during these stressful years of high school, and that it was a very good way of being."

He ran for class president as a junior, and was elected from a field of about eight candidates. "I wouldn't have voted for me as a freshman or a sophomore," he confided. "I was . . . apathetic. But I became a different person."

Then the coronavirus pandemic hit, visiting upon all of his schoolmates constraints, constraints with which Epstein, because of his concussion-enforced isolation, was somewhat familiar.

Asked what it was like being class president, he replied, "It's been one of the joys of my life, I love it, but it pained me to see that Covid caused people not to show up at school anymore and to fail classes. We were learning online, but it's hard to be motivated from your room when there's so much pain and misery."

"It's been a hard year," he concluded. "In mid-March all the seniors and juniors could come in five days a week, with masks, and in the beginning of the fourth academic quarter all freshmen, sophomores, juniors, and seniors could resume in-person learning, but it still was different."

Asked if he'd been re-elected, the interviewee said, brightening, "Yes, I was unopposed this year."

He reached for his cellphone to show his campaign poster, an "Abbey Road" album facsimile of the parading Beatles. "All of them are me," he said. "Here, on the left, I'm carrying a sword and wearing a Viking hat, symbolizing that I would fight for my classmates. The next one is me wearing the Bonac flag, which was made by the band for the homecoming pep rally, symbolizing that I would be my classmates' biggest cheerleader."

"Then there's me in a business suit, symbolizing that I would get down to business and get everything done for them, and the last one is John Lennon in white, which is spiritual. He's still with us, his music still moves people. I was saying, 'I'll be there for you, just as he is.' As class president I will always be there for you, get down to business, and will always cheer for you and fight for you."

"Vote for Jake, Votar Para Jake," it said atop the poster.

During the pandemic summer, he was "not doing much," and was visited periodically with recurrent concussion symptoms. "Stress brings it back," he said. "My grandmother and my mother noticed, and they sent me to a virtual program with Tony Robbins, the life coach who's worked with former presidents, and with Serena Williams and Michael Jordan. It was the largest Zoom program in the world during the pandemic. He told us he got to where he was by full immersion in what he loves, and that you need to be around the people who work in the field you want to be in."

The field he'd love to be in, Epstein said, was "comedy -- I would love to be on 'Saturday Night Live.' I've studied all the greats -- Eddie Murphy, Chris Rock, Chevy Chase, John Belushi, Adam Sandler. . . . Then I found that Second City was offering comedy improv courses online. I didn't need to go to Chicago or Toronto or Hollywood. I started classes in the fall. Every Friday from 4 to 7 for seven weeks. We put scenes together and get feedback. There's a wide age range -- at 17 I'm the youngest. The people are from all over. There are five levels. I began at level one, now I'm at level three."

Laughter was, he agreed, "very important."

At Hofstra University, Epstein will major in video, television, and film, and will go out, he said, for Hofstra's "Thursday Night Live."

And who, then, would take up the Bonac cheerleader mantle?

"I don't know who will do it. Someone who enjoys sports and likes to cheer on the fans. . . . When you cheer each other on, great things can happen. And it's a lot more fun."

"It doesn't have to be one person. It's the spirit of everybody. You should have fun with it. You only go to high school once. You should know how special it is to do that and to be around such a wonderful program."

The next day, in a speech he gave at the beginning of the commencement ceremony, Epstein said in part to his fellow 230 classmates and to a bleacher-packed crowd: "Each of us has the power to lift people up, to increase happiness and to change the world. . . . Without hardship, success would not be so sweet. Without sadness, we would not understand the true gift of joy. Without losing, we would not appreciate how sweet victory is."

"Give someone a smile. You might make their day. And, as we learned, a smile can even be felt through a mask. . . . Thank you, and congratulations to the East Hampton High School class of 2021. I love you all. Brighter days are ahead."