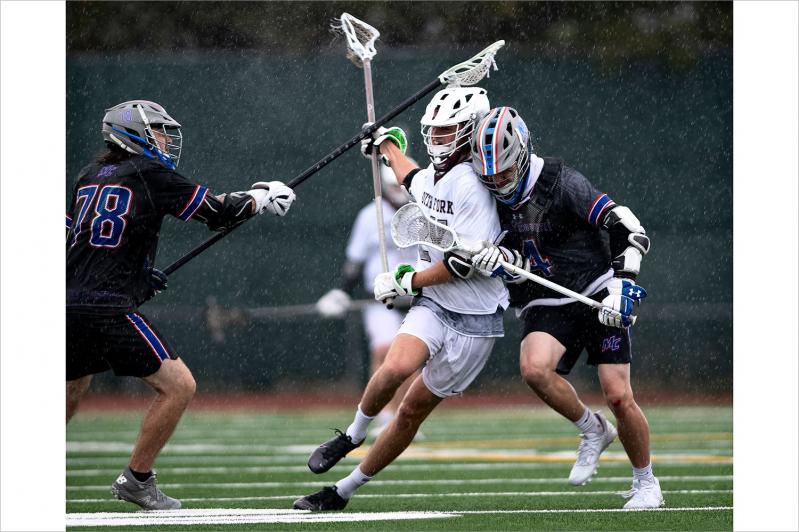 With two games remaining to play in the regular season as of earlier this week, the combined Southampton-based South Fork Islanders boys lacrosse team was 8-4 in the county's power-rated Division 1 and was on the verge of making the playoffs.

In the past week, Matt Babb's team, which has a half-dozen solid contributors from East Hampton High, went 2-1, with wins over Walt Whitman and Middle Country (Newfield-Centereach) and a loss to Huntington, the undefeated league leader.

Huntington defeated the South Fork team 13-5 on May 25, but Babb said that if the seven South Forkers sidelined that day had been available to him, the score would have been much closer.

Those who had been sidelined were returned to the lineup later in the week, and, consequently, things went better: The Islanders defeated Walt Whitman 11-7 last Thursday, and followed up with a 15-6 victory over Middle Country, in the wind and rain on East Hampton High's turf field, on Saturday.

"We had a strong start and kept it going," the coach said of the Whitman win. "They were ranked a little higher than us, so that was a good motivator."

Luke Marro, a Southampton senior and two-time all-county pick, and Chance Brindle, one of three brothers on the team from Sag Harbor, led the way with three goals and one assist each. Zac Mobius, a Mariner, had two goals, and Charlie Corwin (East Hampton), Andre Aponte (Southampton), and Owen Koszalka (Southampton) each had a goal.

Cooper won 21 of 25 face-offs in Saturday's game here with Middle Country, giving the Islanders a big boost when it came to time of possession.

Both Whitman and Middle Country had received higher preseason rankings than had the Islanders, said Babb, adding that his players had regularly risen to the occasion this spring.

"They're keeping the scoring down," Babb said, adding that "we play mostly man-for-man defense. They play well individually and as a whole."

Connetquot (8-3), which was the division's fifth-place team as of earlier this week, was to have played the Islanders on East Hampton's field yesterday, and Lindenhurst, whose record was 3-7 as of Monday, is to play here in the Islanders' regular-season finale tomorrow at 4:30 p.m.

As of Monday, the combined South Fork team was ninth in the power-rated division. The top 11 are to make the playoffs.

Babb's is a senior-heavy team, with 17 in all, which apparently raises a question: Will there be enough players to fill out the rosters of the Islanders' varsity and junior varsity teams next year?

As of the moment, "we don't have enough for two boys lacrosse teams next year," Joe Vas, East Hampton's athletic director, said recently in announcing that there is to be a meeting among coaches, parents, and players at East Hampton High School Wednesday at 6:30 p.m. to discuss the matter.

Babb said he expected to have enough for a varsity next year, "but the jayvee's a question."