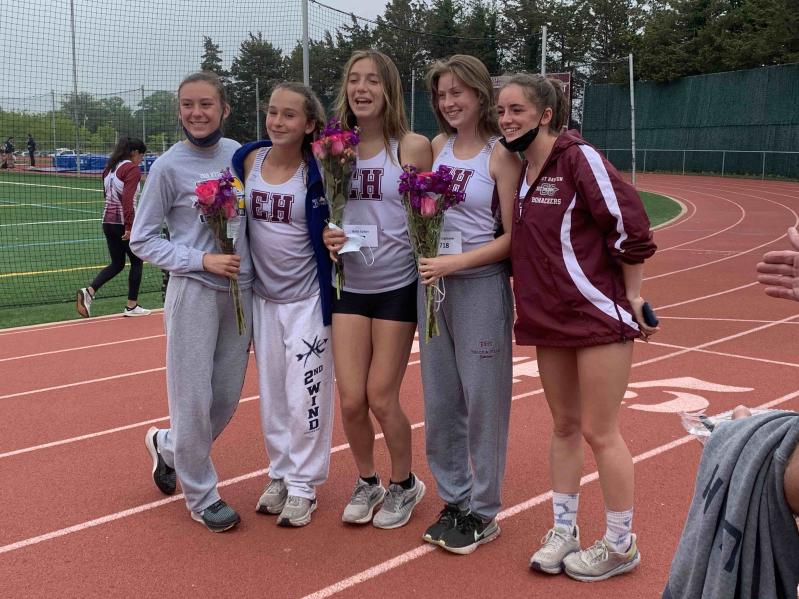 Another meet, another record for Penelope Greene, who broke her own mark in the 3,000-meter race by 22 seconds on May 26 at home against Miller Place.

Six days before, the Pierson senior, who is to run for the State University at Geneseo come the fall, and is running for East Hampton High's girls track team this spring, broke the 1,500 record that Dana Cebulski had set here in 2013.

Greene ran her school record time of 10 minutes and 24.5 seconds in finishing as the 3,000 runner-up to Miller Place's Sierra Gray, who led the entire way, with Greene running off her shoulder.

It was good that East Hampton's distance runners were pushed by their Miller Place peers, Cuesta said. Greene often finds herself running by herself in the 3,000.

Danielle Cirrito, a Miller Place junior, won the 1,500 in similar fashion, outkicking Dylan Cashin in the last lap, though, in contrast, Cirrito let Cashin do all the work, shadowing the East Hampton ninth grader until the last lap began.

Cashin went out early in the 800 too, but wound up finishing third, in 2:42.8, behind Cirrito, the winner, and her senior teammate Ava Engstrom, who was the runner-up in 2:41.5, a season best for her. "She's very young," Cuesta said of Cashin. "She'll learn."

Speaking of season bests, there were three recorded by Bonac runners that day, as well as 13 personal records, leading Cuesta to say that "as a coach that's what you want to see. I couldn't ask for anything more. The nice thing is that in track you're always racing the clock, bettering your measure. You don't have to be the best of the best; you can always improve. You're always racing the clock."

Miller Place won the meet 80-69, dropping East Hampton to 1-3 for the season, but Cuesta was more than content with the result. "Actually, I was ecstatic given the fact that more than half of our girls are new to the sport."

East Hampton had a quadruple-winner in Meredith Spolarich, a Pierson sophomore who won the 400 in a personal record 64.9 seconds, won the high jump, won the discus, and anchored the 4-by-400 relay team, which ran unopposed.

Bella Tarbet, who may compete in the pentathlon in postseason meets, was the runner-up in the 100-meter high hurdles, placed third in the 400 intermediate hurdles, ran with the 4-by-400 relay team, and, in her first try, long-jumped 13 feet 1 inch.

Looking ahead to the Division III meet, which is to be held Wednesday at East Islip High School, Cuesta said that, as of Friday, Greene was ranked second to Gray in the 1,500 and 3,000, and that Cashin and Engstrom were ranked seventh and 11th in the 1,500. (The top 12 competitors in each event get to compete at the division meet.)

Gray and Greene, moreover, were the top two countywide in the 3,000 as of Friday.