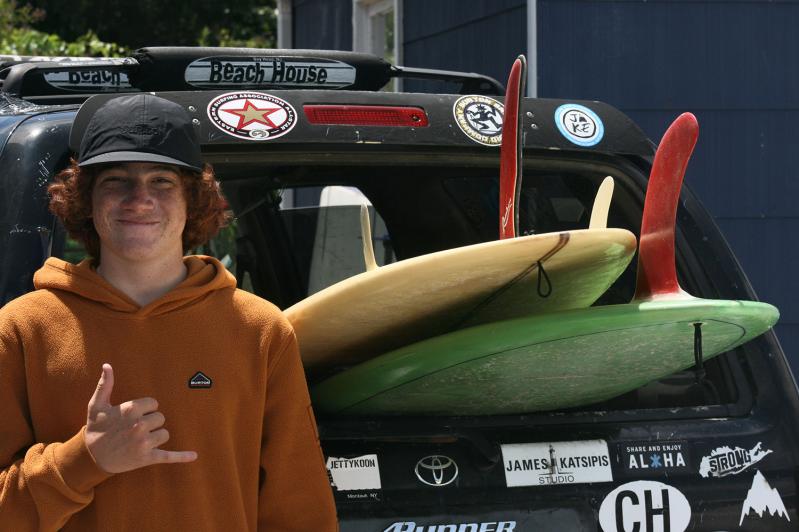 At 14, Noah Avallone is a national champion in two sports.
Jack Graves
By Jacks Graves

When last seen two springs ago, Noah Avallone, a 14-year-old part-time Montauker who goes to the Stratton Mountain School in southern Vermont, was coming off a win at the United States of America Snowboard Association's national championships.

There being no national snowboarding championships last year or this one because of the coronavirus pandemic, Avallone pivoted, training-wise, to surfing while he was living full time in Montauk, and now can say that he is a national champion in that sport as well. Last Thursday he placed first in the under-14 longboard category at the USA Surfing championships in Oceanside, Calif., and placed third in the national under-18s as well. The surfing title was his fifth national one; he's won four in snowboarding.

It was Avallone's first time surfing in California, and he quickly accustomed himself to the different breaks and waves there, nose-riding a 9-foot-3-inch longboard by Paul Surf — the Rockaway board shaper that sponsors him — to victory.

With top finishes at regional and national competitions in Virginia Beach, Ocean City, Md., and at Carolina Beach, Nags Head, and Cape Hatteras, N.C., Avallone is one of the top young surfers on the East Coast in shortboard and longboard. And yet he apparently caught the West Coast and Hawaiian surfers in his age group unawares.

"I think I surprised them," the red-haired boarder said with a smile at his parents' Navy Road house on Sunday.

His father, Mike, said that his son, with whom he'd been surfing at Ditch Plain that morning, had missed the National Scholastic Surfing Association's regional championships in Florida in April, but had, in mid-May, won the Northeast regionals' u-14 division, and had placed second in the u-18s, in Ocean City. And this after having hardly surfed at all for months — there being, Mike said, "no ocean in Vermont."

Avallone recently finished his eighth-grade year at the Stratton Mountain School, from which 46 Olympians have come. He snowboards in the morning when school is in session, and studies — he is a straight-A student — in the afternoon.

A story about him in these pages in April of 2019 said he was "a snowboarder first and foremost," though he will likely have to choose which path to follow to a professional career in the coming year or two, if for no other reason than the competitive snowboarding and surfing seasons overlap.

When it comes to snowboarding, he continues to excel in all of the sport's disciplines — halfpipe, slopestyle, slalom, giant slalom, boardercross, banked slalom, and rail jams — but even in snowboarding he will have to specialize.

Deprived of national championship competition this year, Avallone traveled to Utah, Colorado, and California to compete in Futures Tour snowboarding events, which qualified him to go up against some of the world's best halfpipe riders at US Revolution Tour contests.

Mike Avallone has said that if Noah is to compete at the highest level in snowboarding, "he will by the time he turns 16 have to do one or two events max. . . . Usually, halfpipe and slopestyle are together, and the racing events are completely separate." Noah finished 2020 ranked number one nationally in halfpipe — his favorite event — after winning U.S.A.S.A. series events in Vermont, California, and Colorado.

And then there's skateboarding, a sport in which he doesn't compete, but could. "All of these board sports came out of surfing," his father said, "skateboarding, snowboarding, wakeboarding, windsurfing, kiteboarding. . . ."

And now there's the proposed renovation of Montauk's skate park, a rebuild that's to get underway in October and would make it more accessible to skateboarders of all abilities. "We're 100 percent for it," said Mike, who surfed and skated with the late Andy Kessler, "the godfather of New York skateboarding," when he summered in Montauk in the mid-2000s.

Kessler, along with John Woodstock, designed the skate park.

Shaun White, the three-time Olympic gold medalist, continues to be Avallone's inspiration when it comes to snowboarding. Though now Joel Tudor, a world and many-time national longboarding champion who is known for his graceful style and flow, is one too.

Which path will he choose when it comes to his professional and Olympic ambitions? Stay tuned.