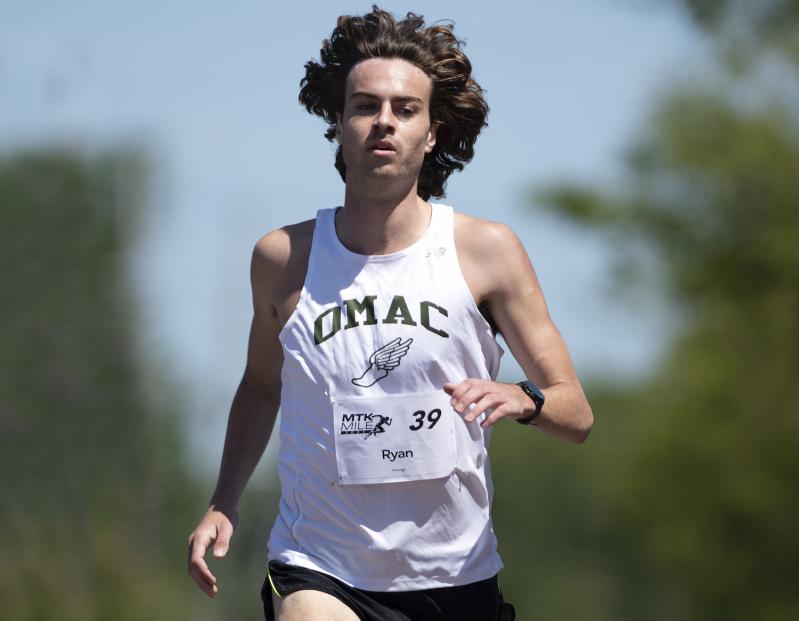 Ryan Fowkes, who set 1,500 and 800-meter records at George Washington University in the past school year, will have his name engraved on the John F. Conner Cup for the third time since it was inaugurated in 2017.
Craig Macnaughton Photos
By Jack Graves

Ryan Fowkes, who as a sophomore set George Washington University records this school year in the 1,500 and 800-meter races, and Paige Duca, a Boston College graduate student who ran cross-country and track there as an undergrad, won the Old Montauk Athletic Club's Montauk Mile with ease on Sunday.

Duca, 23, who is working as a physical therapist at Mike Bahel's Body Tech fitness studios in Montauk and East Hampton, topped a field of 38 in the women's race, and Fowkes, 20, bested 30 other entrants in the men's. The Edgemere Road course spanned the old Montauk railroad station and Lions Field, where a good-sized crowd urged on the participants as they neared the finish line.

In that crowd was the 86-year-old John F. Conner, who in 1990 set a world record in the mile for 55-to-59-year-olds. The Montauk Mile Cup is named in his honor, and the winners' names have been engraved on it since 2017.

Duca and Engstrom chose a downhill course, from the top of Flamingo to Montauk's docks, and, predictably, their times were swifter than on the Edgemere Road one, so there were asterisks by Engstrom and Duca's 2020 times -- a 4:13 in his case and a 5:00 in hers, said Jennifer Fowkes, who oversaw Sunday's fund-raiser for the East Hampton High School's boys and girls cross-country teams.

Neither Erik, a former county cross-country champion who ran cross-country and steeplechase at the University of Massachusetts, nor his sister, Ava, both of whom work at the Deep Hollow Ranch in Montauk, were able to run Sunday, nor could Kal Lewis of Shelter Island, who ran a 4:07.14 indoor mile in the Hawkeye BIG invitational in February.

"I tried to get him," said Kevin Barry, a longtime East Hampton track coach who lives on Shelter Island, "but his coach told him to take it easy this summer."

Olivia Duca, Paige's 18-year-old sister, who recently won Nassau County's 1,500-meter championship in 5:00, and who is to matriculate at Boston University in the fall, was the women's runner-up, in 5:45.27.

Dylan Cashin, also an East Hampton ninth grader, was third in the women's race in 5:49.38.

Other Bonac cross-country runners there that day were Emma Hren and Ryleigh O'Donnell, and Liam Fowkes, Ryan's younger brother.

Barry said the OMAC-sponsored mile races -- 83 were preregistered, the largest number yet -- would help underwrite the boys and girls teams' travel expenses to Rhode Island for either the Brown or Ocean State cross-country invitational meets this fall.

Regular readers may remember that Body Tech lost the lease on its fitness studio in Amagansett during the pandemic, but Bahel said he had landed on his feet.

"We were just about to sell all of our equipment," he said, "when, at the last moment -- it was like being in the bottom of the ninth, with two outs and the bases loaded -- we were able to rent 1,800 square feet of space at 460 Pantigo," opposite Domaine Franey's Wines & Spirits. "It's even better than the place we had in Amagansett."