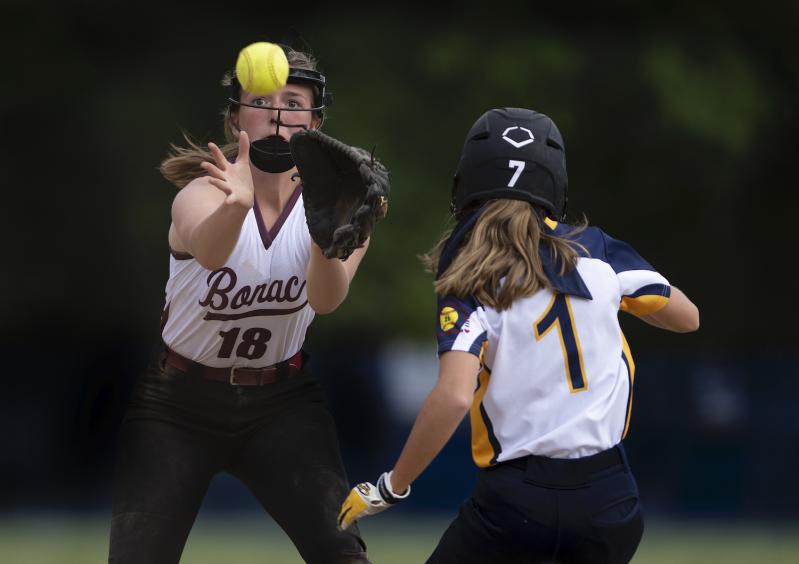 Cami Hatch (18), called up from the junior varsity to replace the injured Emma Terry at shortstop in the June 11 playoff game at Shoreham-Wading River, "was amazing," said Annemarie Brown, East Hampton High's softball coach. Above, she awaited a throw that forced a Shoreham runner at second base.
Craig Macnaughton
By Jack Graves

The East Hampton High School softball team and the Southampton-based South Fork Islanders boys lacrosse team, on which seven Bonackers play, lost first-round playoff games in the past week, a week in which the boys tennis team and the girls and boys track teams also saw postseason action. Neither the baseball team nor the girls lacrosse team, each of which finished with four wins, made it to the playoffs.

The softball team, a young one that finished the regular season at 6-6 and was seeded 10th of the 11 Class A tournament teams, lost 3-1 at seventh-seeded Shoreham-Wading River Friday. A spectator said the score was 1-1 for most of the game, until the home team went ahead for good in the bottom of the sixth inning.

Looking ahead, Joe Vas, East Hampton's athletic director, said that at a meeting to discuss the future of boys lacrosse here on June 9 "we decided to reach out to Hampton Bays to increase our numbers, and agreed to revive the kindergarten through sixth grade youth program that we used to have."

"We'll know for sure whether we'll have a varsity and junior varsity next year by September or October," the A.D. added.

Certain to make it were Penelope Greene, a Pierson senior who set school records this season in the 1,500 and 3,000-meter races, and Bella Espinoza, East Hampton's senior pole-vaulter, Cuesta said Monday morning. Espinoza is ranked second in her event countywide, as is Greene in the 3,000.

The other possible entrant is Bella Tarbet, who placed third in Division III's pentathlon competition. Tarbet won the pentathlon 800-meter race in 2 minutes and 40.92 seconds, a personal best; won the pentathlon shot-put with a heave of 27.8 feet; was third in the long jump and high jump, and was fourth in the 100-meter high hurdles.

"They went back and forth the whole way," Cuesta said. "Not even a second separated them at the end. Penelope's got it in her to beat Gray -- she's six inches taller, so her longer strides in the final 100 ought to do it."

In other division results, Espinoza was second in the pole vault, at 9-foot-6; Meredith Spolarich, a Pierson sophomore, was third in the high jump at 5-0, a personal record; Leslie Samuel, a Bridgehampton sophomore, placed sixth in the long jump with a leap of 15-0; the 4-by-800 relay team of Dylan Cashin, Ava Engstrom, Emma Hren, and Greene placed third in a season-best 10:32.99; Cashin placed sixth and Engstrom seventh in the 1,500, and Hren placed ninth in the 800.

As for boys tennis, Kevin McConville, the team's coach, said that Max Astilean, his number-one singles player, after upsetting Miller Place's number-one in a second-round match, had reached the county individual tourney's quarterfinal round, where he lost in straight sets to the fourth seed. Nick Cooper, East Hampton's number-two, was beaten by the fifth seed in the second round. Further, McConville said that Jackson LaRose and R.J. Jones, East Hampton's second doubles team, lost a first-round match to Half Hollow Hills East's top team.

Matt McGovern and Bryan Chen, East Hampton's top team, didn't make it to the county tourney given the fact that they were upset by Westhampton Beach's third team in the division tournament.

Seeded fifth in the county team tournament, East Hampton was to have played a first-round home match with Southold-Greenport Monday. The winner, in all likelihood, was to have played at fourth-seeded Hills East Tuesday. Semifinal matches were to have been played yesterday. The final is to be played today.