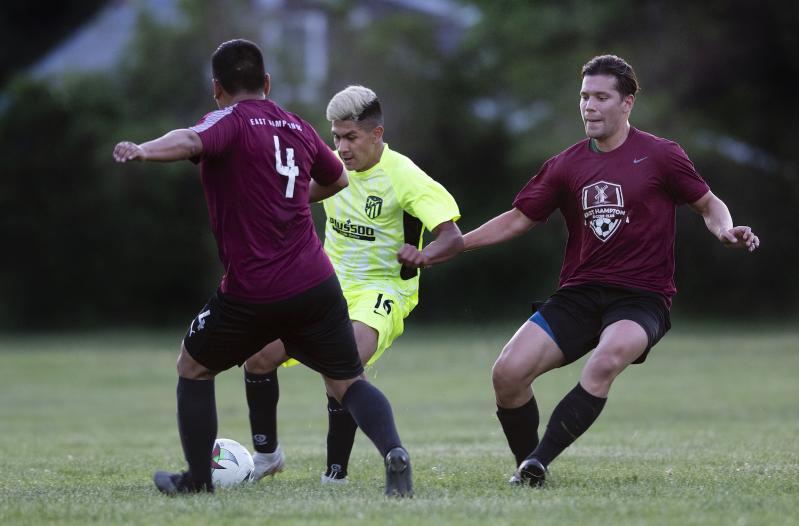 Soon after the above photo was taken, Jhon Guanga (4) of the East Hampton Soccer Club collided with the ball handler, Nico Cifuentes-Diaz, went down, and stayed down for the last six or so minutes of the game with Maidstone Market.
Craig Macnaughton
By Jack Graves

When last seen by this writer, in the third week of November 2019, Maidstone Market's men's soccer team defeated F.C. Tuxpan in penalty kicks to win its 15th 7-on-7 championship since joining the East End Soccer League in 2008.

The Soccer Club, whose manager is Michael Tamay, arrived at Herrick Park with 13 players suited up for the 7:25 game, while by game time Maidstone could send out only five -- four field players and the league's leading goalie, Alex Mesa.

For the past 37 years, the league's games have been played at Herrick on Wednesday nights, but Hamptons International Film Festival movies are being shown on the field on Wednesday evenings now and the league has been bumped to Thursdays for the most part.

At any rate, whatever the reasons were for Maidstone's absences, the teams took the field with the Soccer Club two men up, and with Mesa anticipating an unremitting attack, at least until some of his missing teammates arrived.

Midway through the first half, with the game still scoreless thanks to Mesa's energetic goaltending, Romero Sr. hailed Nico Cifuentes-Diaz, whom he had seen come onto the field from the Reutershan Parking Lot.

But while Cifuentes-Diaz, an East Hampton High School senior who had been a defender on the school's Class A county runner-up soccer team in April, was lacing up his shoes, the Soccer Club's Justin Carpio nudged over the line a pass that had landed at his feet at the right post while Mesa was drawn out to the left.

With Cifuentes-Diaz having joined the fray, Maidstone remained a man down, and Mesa remained constantly under fire. Of the seven or so shots that the Soccer Club took in the first half, one by Mark Ferenczi-Bako, a hard-charging defender, a long waist-high rocket that went left then right like a screwball, probably taxed Mesa the most.

George Naula, the Soccer Club's center forward, missed a golden chance to up his team's lead as the second half began, sending wide a shot into the trees that screen the Stop and Shop market. Carpio followed suit several minutes later, and Bako, too, found the trees when a shot he'd taken sailed way over the Maidstone goal's crossbar.

The Soccer Club's bench whooped it up with about 12 minutes to play when Mesa handled the ball outside the penalty box and was tagged by the ref with a violation that resulted in a direct free kick from in close. The Market packed the goal mouth with a wall of defenders, a wall that the kicker, Naula, was to find impenetrable.

A minute afterward, Nick Escalante, a frequent scorer for Maidstone, let fly a shot that hit off the crossbar, and, with six and a half minutes remaining, Cifuentes-Diaz curled a free kick just over the bar, much like the 30-yard one he almost netted in the Class A final versus Harborfields.

About 30 seconds later, Cifuentes-Diaz stole the ball and dashed up to the right side of the Soccer Club's goal, where he and Jhon Guanga, a defender, collided.

Guanga went down, and stayed down as Tamay, his Soccer Club teammates, and Romero Sr. and his players began gathering around as the game clock continued to run. While Guanga was being looked at, Leslie Czeladko, the league's manager, said that "there is no stoppage time. If we didn't have a running clock we wouldn't be able to get the third games in -- the park lights go off at 9:15."

So that was it. It took four people to carry the injured player off the field, and soon after the third game -- between Tortorella Pools and F.C. Palora, a new entry this year -- began, two village police cars and E.M.T.s arrived.

The Soccer Club and Maidstone Market are to play next on July 15, in the evening's first game.

And come the playoffs, it's safe to bet the Market, as has always been the case, will be at full strength.