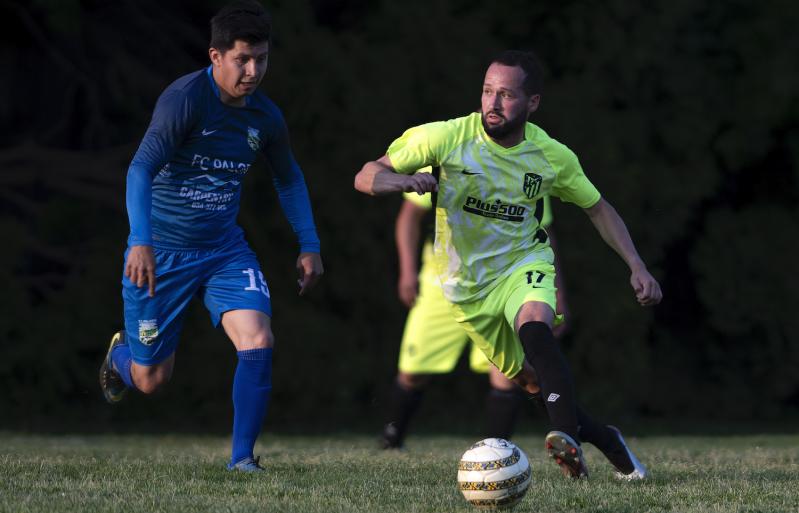 The East End Soccer League's 7-on-7 games at East Hampton's Herrick Park have been moved from Wednesday to Thursday nights, by and large, for the rest of the league's spring season.
Craig Macnaughton
By Jack Graves

"Endless Summer II" -- not East End Soccer's 7-on-7 league -- was playing at East Hampton's Herrick Park on the evening of June 2.

Leslie Czeladko, who manages the Wednesday evening league, which has been in existence for 37 years, was taken aback to see a large movie screen on the field that night, but said later in the week that things had been worked out with East Hampton Village.

Given that Hamptons International Film Festival movies are to be shown at the park on Wednesday evenings throughout the summer, the soccer league's games have by and large been moved to Thursday evenings, though there will be games played at Herrick on June 14 and June 21, Czeladko said, "because of other conflicts."

The six-team league began play on May 12, but didn't get the 8:20 game in "because the lights didn't come on."

Maidstone, whose lineup includes Xavi Piedramartel, John Romero Jr., and Nick Escalante and Charles Escalante, defeated Czeladko's team, Tortorella Pools, 2-1 on May 12; trounced F.C. Palora, a new team that has been playing in Southampton, 7-0, and shut out F.C. Tuxpan 2-0 on May 26 as Nick Escalante and Alex Meza, the goalkeeper, scored goals. Meza scored his on a penalty kick in the first half; Escalante converted a cross from Julian Barahona with six minutes left in the game.

Meza also foiled a penalty kick attempt by Tuxpan's David Martinez in the first half.

Each team was shorthanded when the Maidstone-F.C. Palora game began on May 19. "F.C. Palora had just five men and it showed in the second half," Czeladko reported. "Maidstone, being a man-up, was the stronger team."

The Market had a 1-0 lead at halftime, but ran wild in the second as Giovany Espinoza (two), Charles Escalante, Piedramartel (two), and Meza, by way of a penalty kick, got into the act.

The other unbeaten team as of earlier this week, the East Hampton Soccer Club, whose lineup includes Justin Carpio, Donte Donegal, Jorge Naula, Esteban Valverde, and Nick Tulp, shut out Sag Harbor United 2-0 on May 19, and defeated F.C. Palora 3-1 on May 26, thanks to goals by Mark Bako, Naula, and Elvis Rojas. Donegal had an assist.