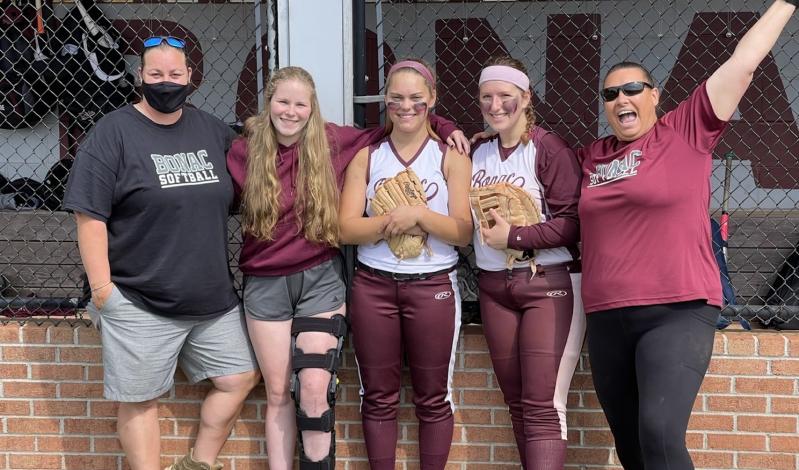 Leah Masi, who plays third base for East Hampton High's softball team, had to take an Advanced Placement test on June 2, the day the Bonackers were to have played at Harborfields.

The bus left early, at 2 p.m., and Masi, one of the team's leading hitters, who was taking the test at home, missed it.

"She didn't finish the test until 3:30," Annemarie Brown, East Hampton's coach, said later in the week, "but her parents drove her to the game."

And a good thing, too, for Masi, who arrived in the fourth inning, was to drive in the winning run in the bottom of the ninth, an r.b.i. that assured East Hampton, a 4-3 victor, of its first playoff berth in over a decade, according to Brown.

Emma Terry, Bonac's leadoff hitter, tripled to lead off the top of the ninth, Brown said, and Masi followed with a triple of her own, treating East Hampton to a 4-3 lead.

"In the bottom of the ninth, they had runners at first and second with one out," Brown continued. "We got an out on an infield popup," and Caroline DiSunno, East Hampton's sophomore pitcher, "struck out their number-six hitter to close it out. It was a great win. They've improved since we first saw them."

On Friday, at home, the team, coached by Brown and Melanie Anderson, gave 9-1 Islip a scare, bowing 4-1 in the end after shutting out the league runner-up through the first three and a half innings.

It was Senior Day, said Brown, who has only three -- Katrina Osterberg, who has not played this season because of a knee injury, Catherine LeFevre, an outfielder, and Ella Grenci, the first baseman.

Osterberg would have been the starting catcher this year, but Emily Kennedy, a sophomore, has done very well in her stead.

"A ton of people showed up" for that last home game, the coach added -- a group that included six of her teammates from the 1997 team, Lou Reale's "first crew."

"We definitely were on fire that day -- our outfielders chased down a lot of hard-hit fly balls -- they were like a vacuum. Caroline pitched great; she had a bunch of strikeouts. . . . They scored three runs in the fourth and we scored one when Leah drove in Emma Terry, who had tripled, and then they scored one more in the seventh."

The riser that Islip's pitcher threw gave Bonac's hitters trouble, prompting Brown, who set pitching records when she was at the State University at Cortland, to say she'd throw that challenging pitch to her batters in pre-playoff practice sessions.

"Bunts and slashes are what we need to work on," she said, adding that "we did have some great hits on Friday, and the umps said Melanie and I were doing an amazing job. One of them said it was the best game he'd seen all season."

The Class A playoffs are to begin tomorrow and are to go through the week.