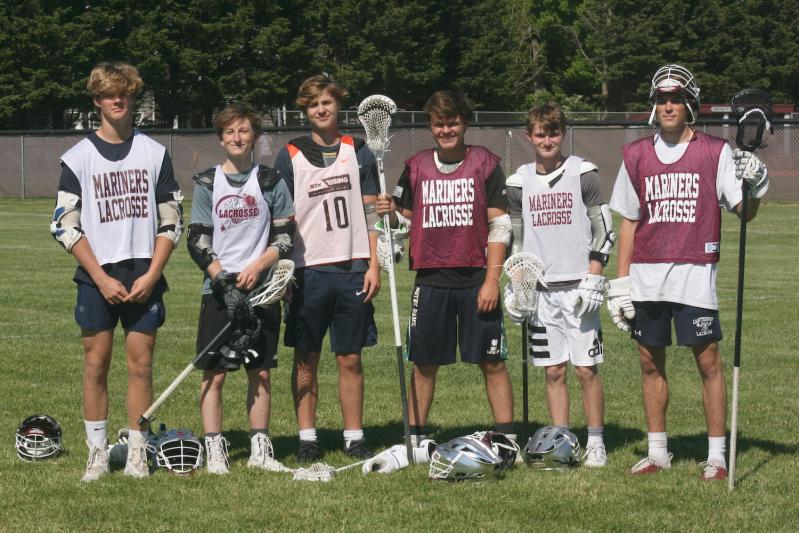 There are seven East Hampton High students on the Southampton-based South Fork Islanders boys lacrosse team, which made the playoffs this week. Six of them are shown above -- Charlie Corwin, Kai Esposito, Jack Freel, Aiden Cooper, Colin Schaefer, and Bryan Pannasch. Jack Cooper, who handles the face-offs, is not pictured.
Jack Graves
By Jack Graves

Backed by a loud crowd, the combined South Fork Islanders boys lacrosse team reeled off five unanswered goals in the first five and a half minutes of a must-win game Friday on the way to a 13-8 win that earned them the playoff berth they've been seeking for several years.

Matt Babb, the coach, asked everyone in the postgame huddle how it felt, but he needn't have: The roars and hugs all around provided ample evidence that making the playoffs felt great.

"We've been working for this for five years, ever since we were eighth graders," Aiden Cooper, a senior defenseman and one of the team's four captains, said in the afterglow. "We put it all on the line this season -- I've never been on an above-.500 team before. It's a great feeling."

Before the game, the third to be played by the Southampton-based Islanders on East Hampton High's turf field this spring, its 17 seniors -- five of them East Hamptoners -- were introduced. Cooper, it was said, is to attend Skidmore College in the fall; Bryan Pannasch is to play lacrosse at Lynn University in Boca Raton, Fla.; Nick Lombardo is to attend the State University at Albany; Ethan Stein is going to Louisiana State University, and Kai Esposito is to matriculate this fall at the County College of Morris in New Jersey.

Babb made sure that all the seniors -- everyone, in fact -- got to play that day against Lindenhurst.

In a 14-11 loss to Connetquot on the same field two days before, Jack Cooper, an East Hampton freshman who has often had the upper hand in face-offs, didn't get all the help he needed from his wings. But on Friday he did.

One of those wings, Cooper Brindle, a Southampton senior, swept in as Jack Cooper and his opposite number vied for the ball at midfield, scooped it up, and, after dashing down the field, put a 15-yard shot past Lindy's goalie, a statement that the bleacher crowd hailed.

A nice in-close save by Hudson Brindle, the team's stellar Pierson senior goalie, sent the teams into the second quarter with East Hampton up 6-2, its efforts meriting loud applause.

By the half it was 7-4, and in the first two and a half minutes of play in the third period the South Forkers tacked on two more goals, thanks to Jack Freel, a tall Bonac sophomore who always can be found around the crease, and Luke Marro, a two-time all-county senior from Southampton who orchestrates the Islanders' offense.

Lindenhurst did not go gently, however. Dense fog had rolled in, and midway through the third period, with two South Forkers sidelined by the refs following penalty calls, the visitors pulled to within three goals, then two, at 9-7. But as a result of shots by Mobius, Cooper Brindle, and Chance Brindle, who had faked a pass before zipping one by the Bulldogs' keeper, the home team reasserted itself in the quarter's final minutes.

Cooper Brindle found the back of the net in the fourth period, answering a goal that Lindenhurst had scored earlier in the frame, and the last eight minutes were scoreless. The last seven minutes, really, for the refs called an end to it with 1:02 left on the clock after apparently hearing Lindenhurst players vowing to go down swinging, as it were.

South Fork's players were on the brink of unrestrained behavior too, although, judging from all the whoops, hugs, and claps on the back, it was gentler in nature.