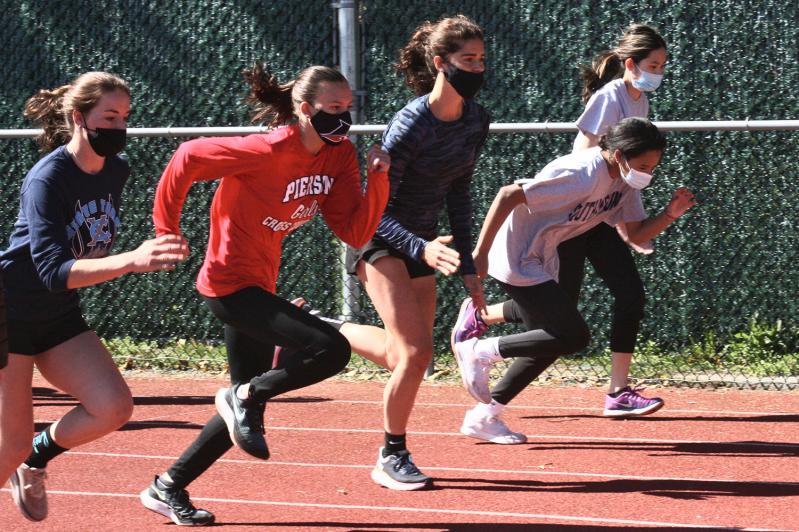 Penelope Greene (in red), a Pierson senior who recently won the county C-D girls cross-country title, will team up with a strong East Hampton quartet in the distances this season.
Jack Graves
By Jack Graves

Joe Vas, the East Hampton School District's athletic director, said Monday he thinks it will be a good spring for the high school's varsity teams, if for no other reason than the kids are finally getting a chance to play.

But more than that, the prospects appear bright when it comes to baseball and softball, which are written up elsewhere in these pages, and the news for girls lacrosse is good too inasmuch as 48 hopefuls — the most ever — turned out.

"We're very happy about that," said Vas, adding that, at the least, the varsity, which is bolstered by 10 players from Sag Harbor's Pierson High School, Grace Perello, a senior midfielder, and Emma Rascelles, a sophomore attack, chief among them, would be "okay."

The boys and girls track teams, each of which have rosters "in the 20s," and boys tennis ought to be all right too, though Kevin McConville, the boys tennis coach, will not be able to avail himself of "three very good seventh graders" owing to the district's rule that seventh graders cannot move up if there is a middle school team they can play on.

Both track teams, buoyed by Pierson's county Class C-D cross-country champions — Ben McErlean and Penelope Greene — ought to be strong in the distance races. Greene joins Dylan Cashin, Ava Engstrom, Emma Hren, and Bella Tarbet, who, with Ryleigh O'Donnell, who plays softball in the spring, placed third in the Class B cross-country team competition. Likewise, McErlean should find himself in good company with runners from East Hampton's fourth-place boys cross-country team.

Matt McGovern, who recently helped lead the boys soccer team to the county Class A final, is to team up with fellow senior Brian Chen at first doubles for McConville's boys tennis team. Jackson LaRose, a Pierson junior, and Max Eberle, an East Hampton senior, are to play at two, and McConville will put the third team together from among the freshmen who have turned out.

The boys lacrosse team, an amalgam of Southampton, East Hampton, Pierson, Bridgehampton, and Ross School players known as the South Fork Islanders, whose coach is Matt Babb, continues to be based at Southampton High School, though there will be several games played here, the first of which is to be contested with Riverhead on Saturday at 2:30 p.m.

Softball is also to make its home debut that day, at 4 p.m.

Though the coronavirus infection rate is low countywide, pandemic protocols will continue to be in force this spring. "I don't know about the kids, but most of our staff are fully vaccinated," said the A.D., who added that "we don't have to test in high-risk sports anymore," boys lacrosse being the sole spring one. Masks, he said, are to be worn by athletes "as tolerated," and spectators will be limited to two per player at home and away games.

Live-streaming of games on the NFHS Network had been "great," he said, and would continue. "Anything on the turf field will be on, though there's no Wi-Fi on the baseball and softball diamonds."

Swimming also figured into Monday's conversation inasmuch as Bella Tarbet (Washington and Lee), Caroline Brown (Skidmore), Owen McCormac (Marist), and Colin Harrison (Florida Institute of Technology) were to have signed letters of intent Tuesday to attend colleges where they plan to continue competing in the sport.