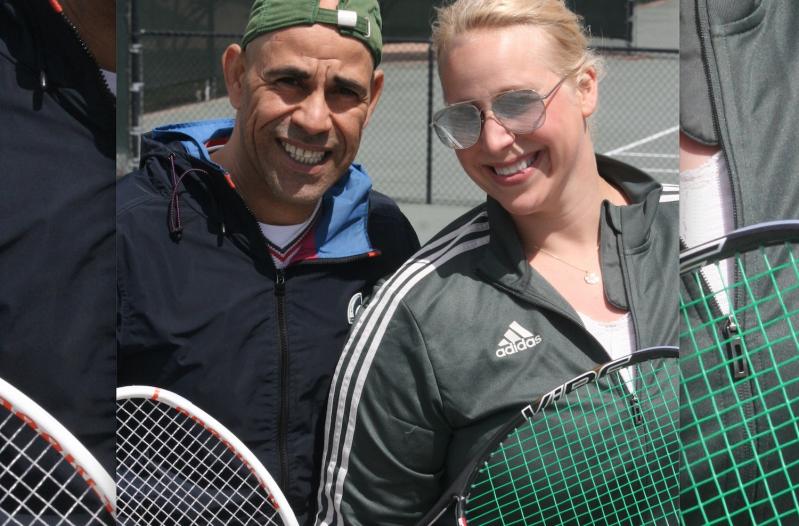 Sayed Selim and Stephanie Janus are betting that an outdoor glass squash court behind the Southampton Arts Center this summer will prove to be a big draw.
Jack Graves
By Jack Graves

Sayed Selim, the former coach of Egypt's national women's squash team, who worked so well with youngsters when he was the Southampton Recreation Center's squash director about a decade ago, continues to dream big when it comes to broadening the appeal of a sport that has largely been the province of the world's well-heeled.

Like CitySquash in the Bronx and SquashBusters in Boston, Selim's ultimate aim is to oversee a squash academy on the East End open to all kids who have fallen in love with the lightning-quick four-walled racket game, which has been touted as the healthiest of all sports by Forbes magazine.

Selim said during a conversation Friday that he has little doubt youngsters will take to squash once they've given it a try.

To that end, he and his partner, Stephanie Janus, plan to offer free lessons to all East End students this summer in a Home, Sweet Home-shaped glass court on a grassy area near the Southampton Arts Center from July 1 through Sept. 31.

The couple, who live in Water Mill with their 5-year-old daughter, Sky, who's taken to the game, expect to take delivery of the 32-foot-by-21-foot German-made ASB court in mid-June.

Open-roofed, it features an 18-and-a-half-foot-high front wall whose sidewalls slant down to a seven-foot-high back one that has a door through which the players can enter and exit. It has a nonslip glass floor.

Recently, Southampton Village Mayor Jesse M. Warren and his board approved the Selim-Janus proposal, which they first pitched a little more than a year ago, before the coronavirus pandemic hit. The interviewees said that "Mayor Warren deserves a big thank-you -- without his support we wouldn't have been able to come so far." They also said they were very appreciative of the support they'd received from Gary Goleski, the superintendent of the village's Public Works Department, and Cathy Sweeney, the deputy village clerk.

Selim and Janus added that, besides squash, onlookers could also play badminton, Ping-Pong, and chess. "Pickleball can also be played on the court," they said.

Before leaving as the Southampton Recreation Center's full-time squash director about 10 years ago, the popular pro had built up a large following through coaching fourth through seventh grade students in three-day-a-week after-school clinics at S.Y.S., though the numbers progressively dwindled after he left to teach top-ranked juniors at the Pyramid Club in Westchester County and New York City.

One of his S.Y.S. students, Conor Ryan, said during one of those after-school clinics, "I don't like a marshmallow for a coach, or a drill sergeant. Sayed's perfect -- he's great."

Another, Cecelia Scheuer, said, "You don't want someone who says you're wonderful all the time. He tells you things, but he's not mean. He gives us gummy bears. Sayed's funny too."

A full seven-day-a-week schedule is planned, to include clinics, private lessons, round-robins, and match play for 7 through 9-year-olds and for 10 through 12-year-olds, as well as free court time for adults.

There are to be tournaments in August for 32 college-age players, and for 11 through 14-year-old and 14 through 18-year-old boys and girls. A V.I.P. party for sponsors and donors is also be held at the court, a party at which there will be exhibition matches pitting the program's best players against one of the world's top pros.

In making their most recent pitch before the village board, Selim and Janus said, "This program will be an integral part of the local Squash and Education Alliance, a nonprofit dedicated to providing local youth with valuable life skills, with an accessible path toward scholarships at top colleges, and with tools for living healthy lives."

"The chief goal of these free summer lessons is to inspire kids to become successful young adults who can make a positive impact on the world."

Should their pilot program in Southampton Village prove viable, Selim and Janus said they would very much like to replicate it in East Hampton, with a glass court perhaps at either the town-owned Stephen Hand's Path fields or in Herrick Park in East Hampton Village.

Stuffed With Turkey? Walk It Off
Blood Drive Tuesday in Bridgehampton
Holiday Lights and Charitable Efforts in Montauk
END_OF_DOCUMENT_TOKEN_TO_BE_REPLACED