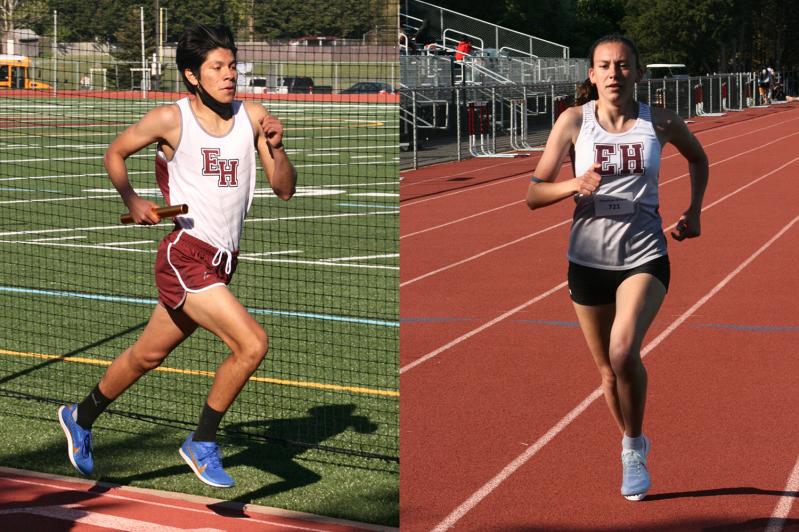 Milers were in the news here this week as Penelope Greene, a Pierson senior who runs in the spring with East Hampton High's girls track team, not only broke five minutes in the 1,500 meters, which had been her goal, but also set an East Hampton High School record in doing so last Thursday in a meet here with Amityville.

And on Saturday at the Westhampton Beach Invitational, Brayan Rivera, an East Hampton freshman, broke the freshman 1,600 record that Erik Engstrom had held.

Yani Cuesta, who has coached her for the past several years, said Greene, who is to run at the State University at Geneseo come the fall, had been on the cusp of breaking five minutes since the winter of her junior year, when she ran a 5:01.

The coronavirus pandemic interrupted last spring's season after four practices, said Cuesta, but things fell into place for Greene this school year, given the realigned winter, fall, and spring sports seasons, which provided the county's Class D cross-country champion with a smooth transition from cross-country to outdoor distance running.

East Hampton's boys team was to have been at home against Amityville last Thursday, with the girls away, but both Amityville teams competed here, as it turned out.

East Hampton's girls team won 87-36; the boys lost 85-32. The girls were 1-2 and the boys were 0-3 as of Monday, with two league meets remaining, with Miller Place and Sayville, before the division and state qualifier meets. There will be no state track meets this year.

Ben Turnbull, the boys coach, said at Monday's practice session that he has only 13 on his squad this season, and that several competitors, namely Evan Masi, Ben McErlean, and Luc Campbell, who would have been top scorers, are rehabbing injuries.

That it was decided to run the boys 1,600 and the girls 1,500 simultaneously worked in Greene's favor, Cuesta said. "There were three girls and four boys. In the 3,000, which we didn't do that day, she's racing herself. Penelope's got that runner's mentality -- she doesn't like to get passed."

As for Rivera, Turnbull said that the 4:44.04 he ran in the Westhampton Beach invitational's 1,600-meter race Saturday evening set a school record for freshmen, bettering the 4:44.57 that Erik Engstrom, a county cross-country champion in his senior year who went on to run at the University of Massachusetts, had run in 2013. Rivera, who finished fifth, was now "the sixth-fastest freshman in New York State, and is ranked 21st over all in Suffolk County," Turnbull said.

Back to the girls, Bella Tarbet, whom Cuesta and Eric Malecki have been readying for possible pentathlon competition in the postseason, was a multiple-winner. She won the shot-put with a heave of 27 feet and 1 1/2 inches, won the 400-meter intermediate hurdles, and ran a leg on the runner-up 4-by-400 relay team with Anna Carman, Uma Nolan, and Meredith Spolarich.

"She does really well in the shot-put for someone who is still working on her form," Cuesta said of Tarbet. "Quickness has a lot to do with putting the shot, and, obviously, strength. Strength and quickness. Bella's tall and quick -- she's golden."

The coach added that Tarbet had done four of the pentathlon events this spring -- the 100 hurdles, the shot-put, the high jump, and 800 -- though, as of Monday, had yet to do the long jump.

Other notable performances last Thursday were turned in by:

Spolarich, a Pierson sophomore who won the 400, won the discus with a personal-best throw of 69 feet 10 inches, and was a member of the runner-up 4-by-400 relay team. The winning 4-by-4 relay team comprised Dylan Cashin, Ava Engstrom, Emma Hren, and Greene.

Leslie Samuel, the first Bridgehampton athlete to compete with East Hampton's girls in 22 years, who was second in the long jump at 15 feet 1 1/4 inches, was third in the 200, and was fourth in the 100, just out of the money. "For a first-timer, she's doing really well," the coach said. "Had we had a 4-by-100 relay, she would have been in it."