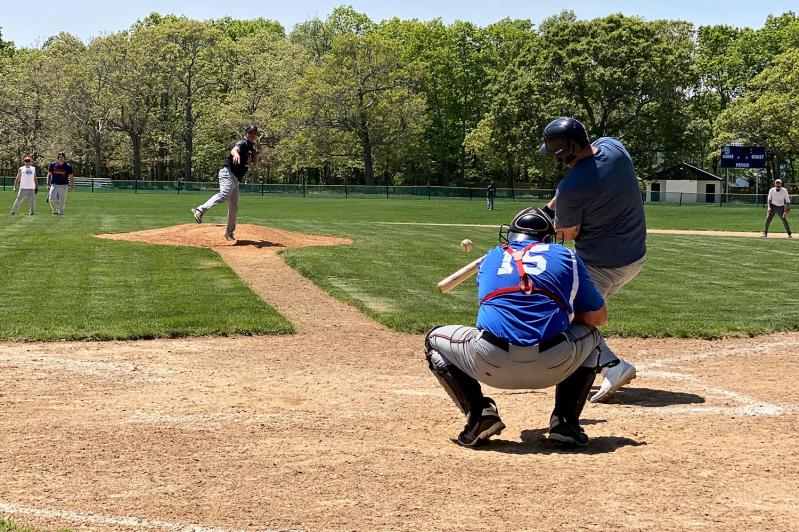 Hamptons Adult Hardball, whose inaugural season will feature four teams, will play its opening game on Sunday at Mashashimuet Park.
By Jack Graves

Jim Kinnier of Noyac and Peter Barylski of Water Mill have played baseball in adult leagues up the Island for years, Kinnier, 57, for a decade, and Barylski, 56, for maybe twice that. But at Kinnier's suggestion the two decided this past fall to start something out here.

And so, the Hamptons Adult Hardball league, HAH, was born. Its first game is to be played Sunday at Sag Harbor's Mashashimuet Park between the Harbor Krakens and the New York Reds, a team managed by Frank Vespe of Springs, at 10 a.m.

Kinnier's Sag Harbor Royals includes a couple of Montaukers on its roster, Will Collins and Keeler Otero. A decade ago, Collins played with Vinny Alversa, Henry Meyer, Andy Tuthill, Adam Gledhill, and other East Hamptoners on the East End Tigers, the dominant amateur baseball team on Long Island.

"I've played in the Long Island Midweek League at Eisenhower Park for the last 10 or 11 years," Kinnier, a catcher, said during a telephone conversation Monday. "And you're right, it's a very long trek. That was the biggest reason that I called Peter in October or November. We didn't know each other, but I knew he managed the Publick House Brewers, who played in a league with UpIsland teams. His problem was a little different from mine, but it involved travel -- he said teams from up west didn't want to come out east. So, that's basically why we thought of beginning a league here."

Kinnier said four 30-and-over teams with 60 players in all are ready to go, and that interest continues to mount daily. Scott Green of Hampton Bays had been "a huge help in setting the league up," as he runs baseball tournaments throughout the country, in Cooperstown, N.Y., and in Florida, among other places.

Games are to be played at Mashashimuet Park, whose field, Kinnier says, "is great," and at Southampton High's junior varsity field. Each team is to play 12 games and all will make the playoffs. The schedule is online at hamptonsadulthardball.com.

"We're off to a good start, but we are still welcoming players," Kinnier said. He added that the Hamptons Collegiate Baseball League, whose season begins on June 15, is to share the field with Hamptons Adult Hardball, so it "will be busy."