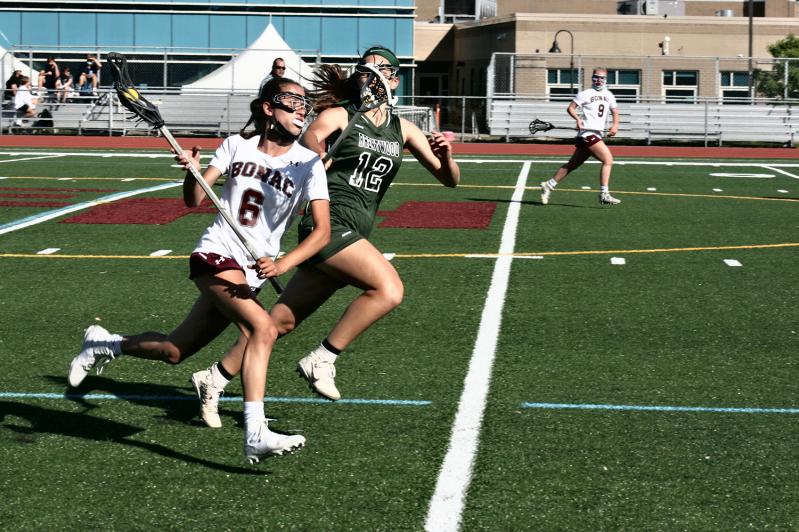 The 9-7 win over Brentwood was the third win of the season for Jessica Sanna's girls lacrosse team, which has largely been pitted against perennial lacrosse powers this spring. The boys tennis team's 4-3 win over Westhampton Beach probably assured it of a tie for the league championship, although matches remain with Shoreham-Wading River, Southampton, and Southold-Greenport, teams that the Bonackers handled easily in their first meetings.

Max Astilean, who played at second singles, won the clinching point, defeating his opponent 5-7, 6-3, 6-4, coming back from 3-4 in the third set.

The first time around, the Hurricanes swept the Bonackers in doubles on the way to a 5-2 win, but this time Kevin McConville's squad turned it around, with Jackson LaRose and R.J. Jones winning in straight sets at second doubles, and with Patrick Farrell and Max Eberle -- also in straight sets -- winning at third doubles. Nick Cooper, at third singles, won East Hampton's other point, again in straight sets.

The girls lacrosse team went into the halftime break trailing Brentwood 5-4, but rallied in the second half to win 9-7, a fitting result for Senior Day, in which the coaches and younger players honored five seniors -- Grace Perello of Pierson and Shannon McInerey, Lucy Short, Asha Hokanson, and Lauren Gabbard of East Hampton -- in a pregame ceremony.

Isabella Jahkhah, who handled the draws for the visitors, scored four of Brentwood's five goals in the first half. Perello scored three of the Bonackers' first-half goals, with Emma McGrory, following a nice fake, getting the first one seven and a half minutes into the game.

"We were a little sloppy in the first half," Sanna said afterward, alluding to a number of turnovers that occurred after her team had advanced the ball into the offensive end, "but we rallied in the second half to win."