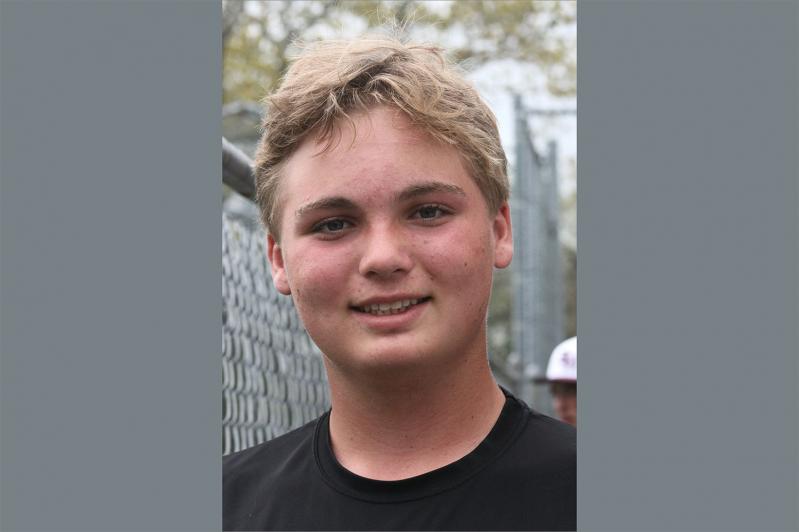 Saturday's high school baseball game here with Half Hollow Hills West had just about everything: plays at the plate, pick-offs, a dazzling catch in the outfield, a two-out line-drive base hit by Burton Garneau to tie the game at 6-6 in the bottom of the seventh, a home run by the visitors to take the lead again in the top of the eighth, and a one-out bases-loaded sac fly by an eighth grader, Carter Dickinson, to make East Hampton an 8-7 winner.

Colin Ruddy, East Hampton's 6-foot-5-inch junior ace, started. While he didn't have his usual command, he kept the Bonackers in the game into the seventh, when, after issuing two walks, he was relieved by Jack Dickinson, who had played flawlessly at short.

At that point, the situation was fraught. The score was tied at 5-5, and the first batter to face Dickinson singled to left field, treating the visitors to a 6-5 lead. But with runners at first and second, the 6-2 sophomore righty got the fifth hitter in the lineup to ground into a forceout at second, and, with runners at the corners and two outs, he induced the next batter to pop out to John Rutkowski in right field.

Drew Salamy, who bats third in the lineup, grounded out short-to-first to lead off East Hampton's seventh, and Ruddy popped out to right, leaving it up to Carter Dickinson. After falling behind 1-2 in the count, he launched a deep fly to the fence in left-center field.

Kody Vela was brought in to run for Dickinson, after which Will Darrell, the left fielder, walked, and Garneau, with the count full, lined a shot past Hills West's shortstop to score Vela with the run that sent the game into extra innings.

Jack Dickinson had a chance to win it, but, with runners at first and second and two down, he lined out to short.

Dickinson retired the first batter to face him in the top of the eighth on a popout to Salamy at second, but the next one, the number-eight man, homered over the fence in left-center on a 1-1 pitch, a drive that caused much celebrating in the Colts' dugout, for they were again up by a run.

The number-nine batter walked and had stolen second before the leadoff hitter fanned for out number two. Then the runner at second took off when, with the count 2-1, the second hitter in the visitors' lineup drove the ball to left. Darrell scooped it up and threw home, where Nico Horan-Puglia, the freshman catcher, leapt up to grab it and tagged the runner out.

Avery Siska, who has had trouble at the plate this spring, got the bottom of the eighth off to a fine start with a first-pitch double to the left-field fence, after which Horan-Puglia bunted his way to first, and Charlie Condon was hit by a pitch, loading the bases for Bonac.

With the count 3-2, Salamy bounced back to the pitcher, whose throw home was in time to force Siska. Ruddy followed with a seeing-eye base hit up the middle that scored Horan-Puglia and tied the game at 7-7, setting the stage for Carter Dickinson's game-winner, his second such of the season.

"He's an eighth grader," Vinny Alversa, East Hampton's coach, said afterward, "but he sure doesn't play like one."

The double comeback win, one of the most exciting diamond victories this writer can remember, improved East Hampton's League IV record to 3-5, and thus kept it in the hunt for a playoff spot.