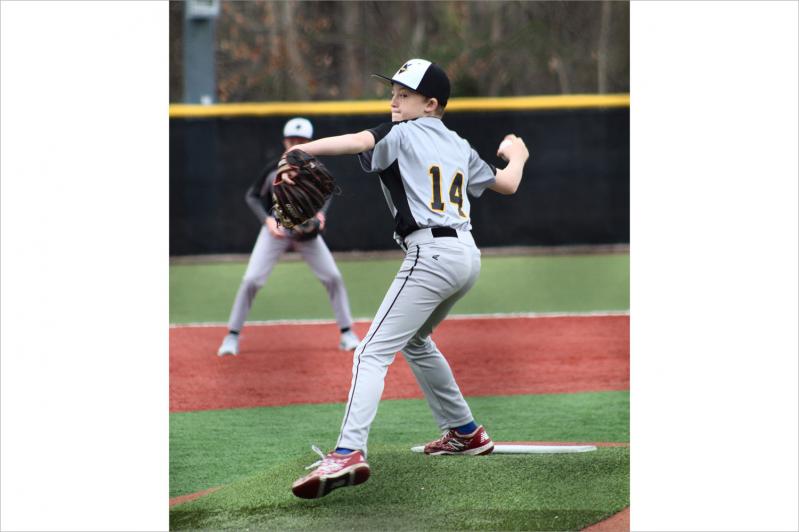 Jackson Carney has advanced to age-group regional competition by winning Saturday's home run derby here. As of earlier this week, he had yet to learn whether he'll do the same in Major League Baseball's Pitch, Hit & Run contest.
Kristin Alversa
By Jack Graves

Jackson Carney won Saturday's Major League Baseball home run derby at the Pantigo fields in East Hampton and will now move on to regional competition. As of earlier this week, he had yet to learn whether he will move on to M.L.B.'s Pitch, Hit & Run competition as well.

Carney won among the 11 to 12-year-olds in a Pitch, Hit & Run contest here on May 8 -- a three-part test that had contenders pitching six balls to a target 45 feet way before hitting three over second base off a tee, and running from second to home as quickly as they could.

Carney, who just missed going to the national finals at baseball's All-Star game in the summer of 2019, won Saturday's derby for 12-and-unders with three home runs. Trevor Meehan had two, and Luca Biondo, Lilah Brown, Lydia Rowan, Hailey Rigby, and Harrison Jenkins one each.

Other Pitch, Hit & Run winners in baseball were Frank Sokolowski of Sag Harbor among 7 and 8-year-olds, and Anthony Cappiello, also of Sag Harbor, in the 9 and 10-year-olds.

In softball, Alexa Schaffer won among 11 and 12-year-olds, Caroline Kelley was tops in 9 and 10-year-olds, and Addison Cinelli in 7 and 8-year-olds. All three are from East Hampton.

East Hampton's Little League organization, which has taken over the T-ball instructional program for 5 and 6-year-olds, reportedly now has 375 participants -- 80 of them in T-ball -- its greatest number ever.

Mark McKee, who oversaw the Kiwanis Club-sponsored T-ball program at the John M. Marshall Elementary School here for 35 years, was honored before the first ball was hit off the tee on May 8.