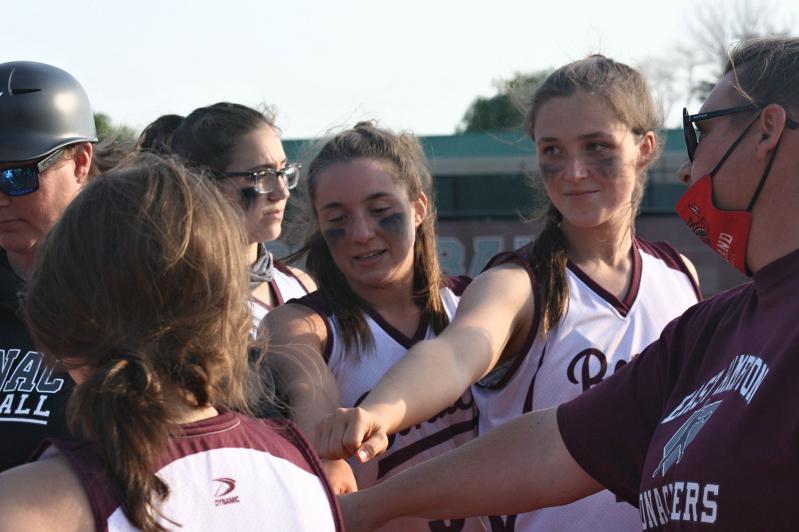 East Hampton High School's softball team improved its record to 4-2 here Tuesday by defeating Westhampton Beach 5-1. The girls hit throughout the lineup despite periodic Dust Bowl conditions that churned up the infield, and fielded the ball cleanly for the most part.

Caroline DiSunno, Bonac's sophomore pitcher, hit the first batter to face her and walked the next, but then settled down.

East Hampton broke the ice in the bottom of the second: DiSunno singled up the middle to lead off, was moved up to second on Emily Kennedy's sacrifice bunt that followed a strikeout, and scored when Maddie Brown, who hits ninth in the lineup, singled to deep short.

Bonac's big inning was the third. Ella Eggert, the left fielder, led it off with a walk, Leah Masi, the third baseman, singled to left field, putting runners at first and second for Ella Grenci, who drove both of them in with a base hit. Katie Kuneth's grounder forced Grenci at second, but, with Kuneth on first, DiSunno rocketed a triple to the fence in left center, scoring Kuneth and putting Bonac up 4-0, after which Catherine LeFevre singled DiSunno in for a 5-0 lead.

The visitors scored their sole run in the top of the fourth when the cleanup hitter, who had led off with a double, came home as a result of an infield throwing error. The batter who had the r.b.i. was thrown out at second, after which a lineout to Brown at second and a 5-3 putout ended the inning.

DiSunno walked the first Westhampton batter to face her in the top of the seventh, but 5-3 putouts sandwiched around a called third strike closed out the game.

"How did it feel?" Brown asked her players in the postgame huddle. Judging from the smiles, it felt pretty good.