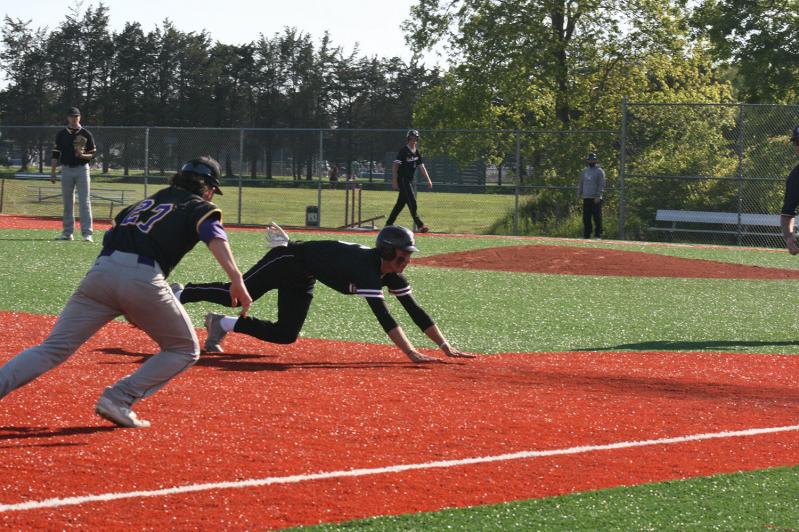 Jack Dickinson, with Will Darrell at bat, stole third in the fifth inning of Monday's rout of Islip and scored East Hampton's fifth run when Darrell singled to right.
Jack Graves
By Jack Graves

Having lost three straight, East Hampton High's baseball team was looking for a win, and it got it Monday thanks to the masterful pitching of Colin Ruddy. He was helped by 11 hits -- four of them doubles to the left-field fence -- and nine walks, gifts bestowed by four different Islip hurlers.

Ruddy, a 6-foot-5-inch junior George Washington recruit, went all the way, giving up one run, which scored as the result of an error, and three scattered hits, all singles. He struck out 10 and walked two.

He hit well too, going 3-for-4 with a double and a run batted in in East Hampton's seven-run outburst in the sixth.

Nico Horan-Puglia, the catcher and leadoff batter, was the hitting star, however, going 3-for-3 with a single and two doubles to the left-field fence, one of which drove in a run.

Ruddy and Horan-Puglia weren't the only ones who drove in runs that day: Burton Garneau, pinch-hitting for Mike Locascio with the bases loaded and two outs in the sixth, cleared them with a double to left, and Jack Dickinson, the shortstop, drove in two -- one in the fifth and one in the sixth. Jack's younger brother, Carter, drove in the game's first run on a sacrifice fly in the first inning; Will Darrell, the left-handed left fielder, plated one in the sixth, and Drew Salamy's two-out, bases-loaded single in the sixth capped the scoring.

As a result of the heady win, East Hampton improved its record to 2-3 in league play, and dropped Islip to 1-4.

The first batter to face Ruddy jumped on a high fastball, lining it over third, but Ruddy, after the runner had stolen second, struck out the next two batters he faced before getting the third out on a fly ball to Locascio in center field.

In the bottom half, Horan-Puglia led off with a single, and, following a strikeout and two walks, was driven in by Carter Dickinson's long flyout to center. With Jack Dickinson at bat, Ruddy was thrown out trying to steal second, ending the inning.

The Bonackers made it 3-0 in the bottom of the second. Jack Dickinson drew a walk to lead off, moved to second on a sac bunt by Darrell, advanced to third following Charlie Condon's flyout to center field, and scored when the Buccaneers' third baseman erred in fielding a ground ball hit his way by Locascio.

With Horan-Puglia at bat, Locascio stole second, and scored on the leadoff hitter's drive to the fence in left.

The visitors' sole run came in the fourth when, with one out, Horan-Puglia threw wide of Salamy in trying to prevent a theft of third. Moments later, Islip tried it again, but this time the freshman catcher's throw was on target, after which Ruddy retired the side by way of a 6-3 groundout.

East Hampton added two more, upping its lead to 5-1, in the fifth. Ruddy led off with a double, Carter Dickinson grounded out third-to-first, Jack Dickinson drove in Dante Sasso, who had come in to run for Ruddy, with a 0-2 single, advancing to second on the throw home. With Darrell up, Dickinson stole third, and scored when the left-handed batter singled to right.

The best was yet to come -- that seven-run sixth-inning outburst during which the Bonackers sent 13 hitters to the plate.

Ruddy fired away in the visitors' last at-bat, fanning the first two batters in short order, after which Locascio gathered in a pop fly in shallow center for the game-ending out.