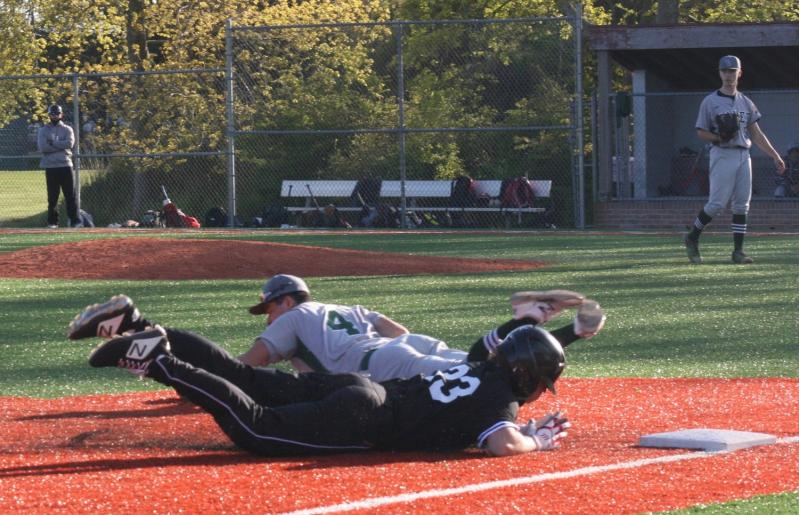 Will Darrell, with one out in the bottom of the fifth inning, walked, moved to second on a single by Burton Garneau, advanced to third on a wild pitch, and scored on a two-run single through the right side of the infield by Colin Ruddy.
Jack Graves
By Jack Graves

A variety of miscues spelled defeat for East Hampton High's baseball team in its home-opener on May 12.

Westhampton Beach, the 5-2 winner, was the beneficiary of two misjudged fly balls, two bobbles of throws to second base that allowed base-stealers to move up, and two fielding errors, one of which resulted in an unearned run.

Jack Dickinson, who started on the mound for the Bonackers, striking out nine in the five innings he worked, deserved better. Four of the six hits he gave up barely deserved the designation, beginning with a leadoff double to left that ought to have been caught.

That runner remained stranded, however, as Dickinson struck out the next three batters to face him, all on off-speed pitches.

In the home half, Nico Horan-Puglia, East Hampton's catcher and leadoff hitter, jumped on the first pitch he saw, driving the ball to the foot of the left-center-field fence, a blow that had the sizable home team crowd cheering.

Dickinson fanned, but then Colin Ruddy singled and Drew Salamy walked, loading the bases for Avery Siska, the shortstop, who watched a third strike go by. The next batter, Carter Dickinson, an eighth grader who had driven in the run that beat Kings Park in the season-opener, popped out to first. No runs on two hits.

As it turned out, Horan-Puglia's fly ball was to be the longest launched that afternoon. Small ball and clean fielding were what put the Hurricanes over the top.

A two-out walk and a softly hit grounder to Salamy at third that he could not make a play on put Westhampton Beach runners at second and third with one out in the third inning. A single that got by Hunter Eberhart, the second baseman, and a subsequent bobble by Dickinson of a nubber to the first base side of the mound treated the visitors to a 2-0 lead, after which the sophomore right-hander closed out the frame with a strikeout.

The Hurricanes made it 3-0 in the top of the fifth. With two outs, a runner who had walked took off for second and advanced to third when Horan-Puglia's throw was bobbled at second base. That runner was to score soon after on a soft grounder to short that Siska had to eat.

East Hampton loaded the bases with one out again in the bottom half of the fifth, and Ruddy, with two outs, delivered, his ground ball through the right side of the infield driving in Will Darrell, who had walked, and Burton Garneau, who had singled.

Salamy was hit by a pitch, which loaded the bases once more, but Siska, after working the count full, struck out.

And that was to be it scoring-wise for the Bonackers.

Vinny Alversa, East Hampton's coach, moved Jack Dickinson to third and sent Salamy to the mound in the top of the sixth. An infield error allowed the first batter to reach first base safely, another followed when Horan-Puglia's attempt to prevent a subsequent theft of second rolled into the outfield, the runner continuing on to third, and, one out later, a bunt in front of the plate that Salamy could not reach in time accounted for the Hurricanes' fourth run.

The visitors' fifth run, with Darrell pitching, came in the top of the seventh as the result of a two-out bloop single over second that scored a runner from third.

The Outdoor Agenda 09.17.21
A Surf Meetup for Youth
I-Tri Ride and Wine Is Saturday
END_OF_DOCUMENT_TOKEN_TO_BE_REPLACED