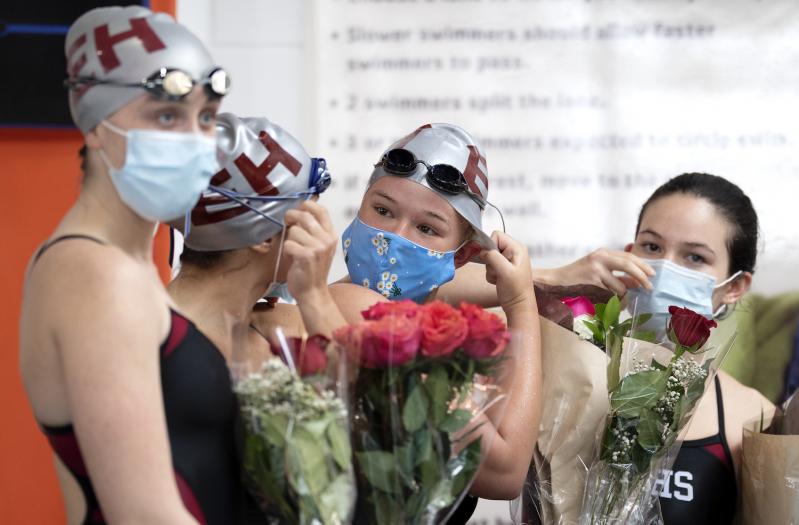 The East Hampton High School girls swimming team, putting in its best effort of the season, placed second to Sayville-Bayport in a virtual League III meet Friday, a meet from which times in three simultaneous dual meets were extrapolated to determine the placements. East Hampton was paired with Lindenhurst here.

The winning team's divers amassed 28 points, but even discounting that total, East Hampton, which has no divers, would still have trailed in the swimming event tally. Sayville-Bayport finished with 367.5 points, East Hampton with 328.5. Sayville-Bayport was the only team to beat Craig Brierley's team in the regular season.

As the result of times recorded in Friday's meet and in prior meets, East Hampton will be well represented in the county meet that is to take place at Stony Brook University on Saturday and Sunday. East Hampton's entries will include Summer Jones, Jane Brierley, Kiara Bailey-Williams, Camy Hatch, Lily Griffin, Ava Castillo, Emily Dyner, and Catalina Badilla.

Jones in the 50 freestyle and 100 butterfly and Brierley in the 100 breaststroke have swum state-qualifying times as well, but there will be no state meet this season.

In an emailed account, Coach Brierley said that when the final results were revealed Saturday, it was learned that East Hampton's 200 medley relay team had edged out Sayville's by .02 seconds; that Jones had placed second, by .9, in the 200 freestyle, and that Griffin, an eighth grader, had dropped 7.5 seconds in finishing fourth in that race, a season best that earned her a berth in the county meet.

Further, Corrina Castillo, the 200's sixth-place finisher, dropped 10.3 seconds from her previous-best time. She was named swimmer of the meet afterward.

Brierley, Bailey-Williams, and Ava Castillo were fourth, fifth, and sixth in the 200-yard individual medley, "earning big points for the team." Badilla tied for second in the 50 free, "which would have been exciting to see if it were a regular meet."

As it turned out, East Hampton held an 8-point lead going into the diving, but Sayville-Bayport was to pull away thereafter.

Dyner swam a personal best -- and a county-qualifying time -- in the 100 butterfly, and swam a season-best time in the 100 backstroke, finishing fifth.

Jones won the 500 free, after which the winning 200 freestyle relay team of Bailey-Williams, Griffin, Badilla, and Brierley out-touched Sayville's A team by .8 seconds.

Brierley, Bailey-Williams, and Griffin went two, three, four in the 100 breaststroke, and, in the last event, the 400 free relay team of Jones, Ava Castillo, Badilla, and Hatch was the runner-up to Sayville's Brenna Horan, Jordan Carpentieri, Emma Haas, and Kathryn Brady.

The third-place finisher in the team competition was Harborfields with 196 points, after which came West Islip with 118, West Babylon with 104, and Lindenhurst with 97.

"The Bonac girls had season-best times and/or lifetime-best times in every event," said Brierley. "An absolutely fantastic effort."