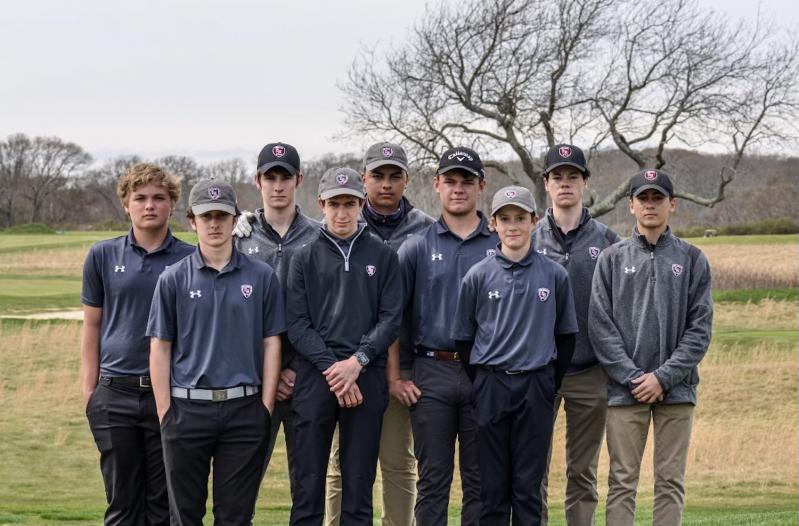 On Monday, for the first time this season, East Hampton High's golf team, which this past week wound up league play at 10-0, was able to play at the South Fork Country Club in Amagansett.

As was the case throughout the league, South Fork, East Hampton's traditional home course, has been off-limits this season owing to the coronavirus pandemic. All the matches have been played at the Rock Hill Country Club in Manorville.

Rich King's team, which has on it three freshmen, two sophomores, and two seniors, has reigned at Rock Hill, despite a preseason prediction that the competition in League VIII would be fierce.

It seemed as if it would be fierce at first, when the young but formidable Bonackers edged Southampton by just two strokes to win an all-important 3 points for low aggregate score in their first meeting. Though the next time the teams vied, East Hampton won by a comfortable margin.

The same crew finished the 2019 fall season with a middling record, but that was then. On average, the Bonackers' margin of victory has been almost 8-1 this season.

"There's a lot of young talent," King said as his players were teeing off on South Fork's first hole Monday afternoon. "They're pretty much interchangeable and they're playing very good golf. I'm happy for them, happy that they've been able to play during this pandemic and happy that they've played so well. I've only got two seniors. . . ."

And one strong eighth grader, Carter Dickinson, who has been playing exhibition matches this season.

King's charges were vying that day to see which four would play Wednesday in a 16-player tournament the Southampton coach, Tim Schreck, had set up at the Atlantic Golf Club in Bridgehampton.

The four who were to play at Atlantic, he said Tuesday, were James Bradley, a freshman, Trevor Stachecki, a sophomore, Aiden Cooper, a senior, and Nico Horan-Puglia, a freshman. J.P. Amaden, a sophomore, had also qualified, King said, "but because of an academic conflict, he won't be able to compete."

East Hampton's top six are to play in the county golf tournament at the Smithtown Landing Country Club on Monday and Tuesday.

Barahona and Becht, each of whom has played number-one singles for East Hampton this season, were the tournament's top seed.

Win or lose, the Bonac pairing was guaranteed a berth in the county individual tourney that is to be contested at Shoreham-Wading River High School Thursday, Friday, and Saturday.

East Hampton's second team, Eva Wojtusiak and Chiara Bedini, the fifth seeds, were upset last week by William Floyd's third team "8-6 in a third-set tiebreaker," the coach said. "It was a very tough loss -- they had a great record in playing number-one for us."