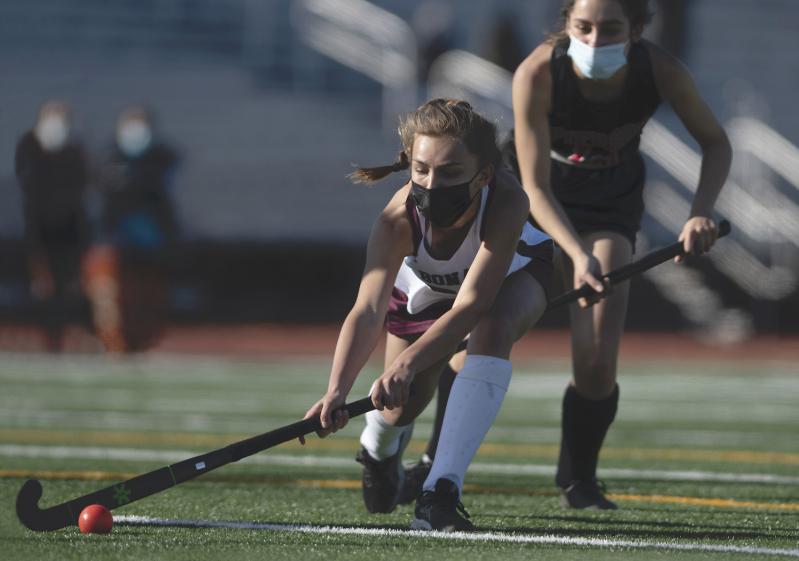 Pierson, a Class C team that had already made the field hockey playoffs, proved to be a tough opponent, as expected. Evidence of that was the fact that Bonac's goalie, Lilia Schaefer, was called upon to make 16 saves. Grace Perello, the Whalers' goalie, made 13.

East Hampton got on the scoreboard about six minutes into it, thanks to a corner play goal by Casey Stumpf, who, positioned at the right corner of the cage, deflected past Perello a long diagonal cross sent her way by Anna Hugo.

A penalty stroke by Rorey Murphy, a senior defender, and one of the team's captains, made it 2-0 with eight and a half minutes left until the half -- a stroke awarded after Perello smothered the ball during a feeding frenzy. East Hampton was to be awarded seven corner plays thereafter, but came up empty on all of them.

Meanwhile, Pierson persisted, led chiefly by its center midfielder, Meredith Spolarich, and its right wing, Brooke Esposito, whose hard crosses into the circle caused much consternation.

Schaefer was kept particularly busy near the end of the second period, fending off three successive corner play attacks before Madison Stuckart put one past her from in close in the final seconds.

The teams continued to battle the rest of the way. A point-blank shot taken by Arabella Kuplins with 10 and a half minutes to play could have allayed East Hampton's anxiety, but Perello parried it. When the final whistle blew, Esposito had the ball and Pierson was advancing.

While happy that her team had finished at 7-6, thus satisfying the playoff requirement of an at least .500 record, when asked how she thought her team had played, Nicole Ficeto, East Hampton's coach, said afterward, "We were passing too early on our free hits -- we weren't drawing anybody out, there was no purpose to our passes -- you need to cut to the ball, our defense was not balanced. . . ."

As for cross-country, Kevin Barry, the boys coach, was without Evan Masi, his top runner, who continues to rehab an ankle bone bruise and a slight ligament tear, and Mikey Gilbert, who was on a vacation planned well before the season began, in Tuesday's division meet.

Still, he said, his team had done well in finishing third, behind Miller Place and Bayport-Blue Point. Amari Gordon, a junior, placed third over all, and Brayan Rivera, one of his promising freshmen, placed seventh.

Gilbert, though not Masi, will be with the team for the county Class B championships on Wednesday.

Looking ahead to the fall, Barry said, "I'll have eight of our top nine back."