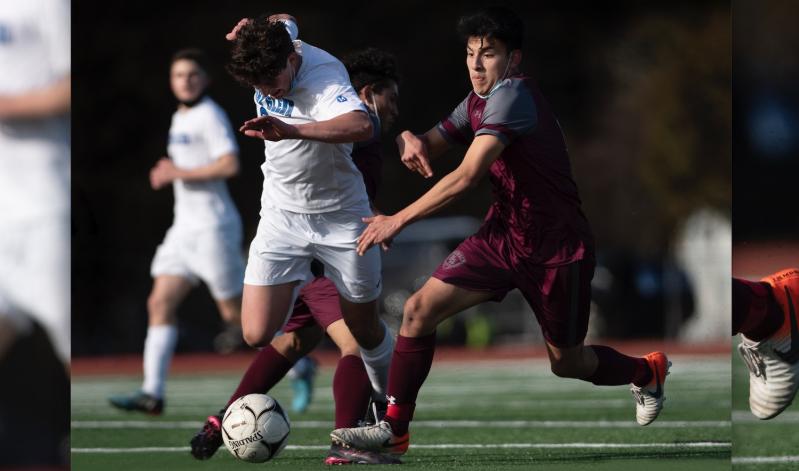 East Hampton High School's boys soccer team improved its record to 6-1-1 here Monday morning by way of a 3-0 win over Islip -- its seventh shutout of the season -- thus setting up a big game with league-leading Amityville that was to have been contested here yesterday.

Record-wise, as of Monday, East Hampton was the league runner-up to the Warriors, who are led by Jeremy Guardado, the county's top-scorer in 2019, and by Cristian Escobar, its center back, but the key game this past week for the Bonackers was their 4-0 win Saturday at Mount Sinai, which clinched a playoff spot for Don McGovern's team, arguably the most-balanced one East Hampton's ever had.

Guardado and Escobar were cited Sunday as among Newsday's top players countywide, as was Matthew McGovern, the East Hampton coach's son, who is, perhaps inarguably, the best passer Bonac's program has produced. He can score too, which he did on Monday, with 37 seconds left in regulation, converting the rebound of a hard right-to-left shot taken by Nicolas Cifuentes Diaz.

McGovern's goal was the third of the game for East Hampton.

With less than two minutes left in the first half, Christian Gomez got the first goal, capping a multi-player breakaway with a hard left-to-right shot into the far corner of Islip's cage from about 15 yards out.

The team had to wait a long time for the second, the result of a penalty kick awarded the home team after McGovern was knocked down in the penalty box by the visitor's goalie with five minutes to play. David Ayala took it, and did not disappoint.

Although clearly the more aggressive team that windy day, East Hampton almost saw its 1-0 lead vanish when, with 13 minutes left, Islip was awarded a free kick in-close. The hard shot sailed over a six-man wall and clanged off the right post where it meets the crossbar. That was as close as the visitors were to come during the 80 minutes of action.

There was a brief scuffle involving the teams at game's end, a set-to apparently begun by an Islip player, but it was quickly defused, thanks largely to Robert Velez, the smallest but one of the team's most tenacious players, the athletic director, Joe Vas, said later. When called names by opponents they should not respond, Don McGovern said on returning to the huddle from a post-game conference with the refs and Islip's coach.

In all, it was a good week for the boys, who, in perhaps their best game of the season, blanked Elwood-John Glenn 2-0 here on March 23; lost 2-1 to a typically physical Sayville team last Thursday, and clinched a Class A playoff berth at Mount Sinai Saturday.

The team was disappointed by the loss -- East Hampton's first in league play -- at Sayville, the elder McGovern said Sunday evening. "We played as tough at Sayville as we had against John Glenn, but, in the end, it didn't matter."

The Bonackers broke the ice, with a goal by Ayala (assisted by McGovern) midway through the first half. But a free kick from the 45-yardline which East Hampton's defenders failed to clear led to Sayville tying the count near the end of the half, and the Golden Flashes won it when, midway through the second frame, "we didn't handle a long goalie punt into the box which ended up in the back of the net."

"We had plenty of chances, before and after their second goal, but couldn't cash in. Their goals resulted from balls we failed to clear."

Saturday, in contrast, was a good day, the coach said. Goals by Eric Armijos, Gomez, and Hudson Musnicki were spread throughout the first half. McGovern emptied his bench in the second, with no fall-off in the intensity of play. Christopher Pintado, a starter, scored the fourth goal. Ayala, Gomez, McGovern, and Aaron Sarmiento had assists.

In the John Glenn game on March 23, Christopher Barahona, East Hampton's goalie, made a leaping save of a goal-bound shot midway through the first half, and Ayala made a credible bid with about four minutes to go until the half, the ball hitting off the inside of the crossbar. A corner kick ensued. Armijos took it, sending the ball across the goal mouth where Cifuentes Diaz headed it just high over the crossbar

Soon into the second half East Hampton got on the board as Ayala converted the rebound of a hard, waist-high back-of-the-foot shot McGovern took from about 10 yards out.

The Bonackers continued to put the pressure on, until, with 18 minutes to play, they scored again as Ben Barris, a defensive midfielder, moved up, received a cross from McGovern, and, from in close, shot once, then twice after the goalie coughed up his first attempt.