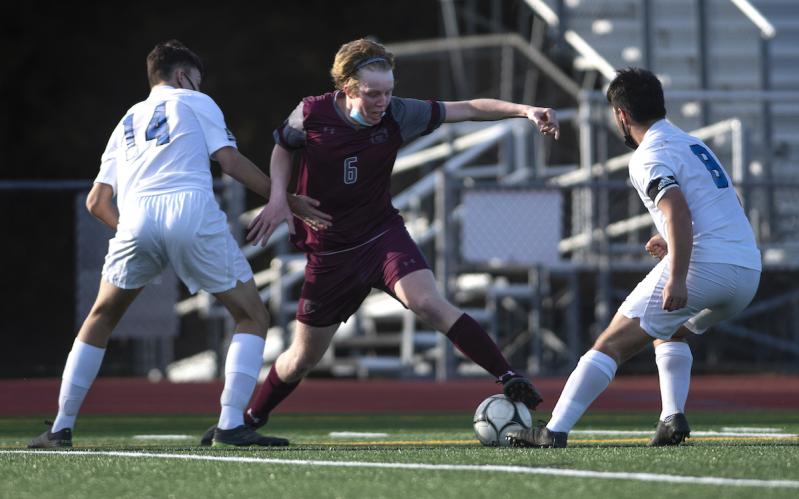 Matthew McGovern, center, who was cited by Newsday as one of the county's top players this past week, playing against John Glenn.
By Jack Graves

Christopher Pintado's 20-yard blast high into the Warriors' nets in the 54th minute made the difference. The senior striker had been momentarily stopped near the left sideline, won the ball back, and slashed, unmolested, toward the top of the penalty, where he let it fly.

The long row of players who had been sitting on the bench leapt up, shouting gleefully, and Pintado all but vanished from sight as he was swarmed by his teammates on the field.

Amityville seemed to have had a slight edge in the first half, which ended scoreless, but, with the wind behind them, the Bonackers unleashed a barrage of shots on goal as the second half began. Before Pintado's all-important score, Nicolas Cifuentes Diaz, Alex Vanegas, Robert Velez, and Matthew McGovern had all taken dead aim. Somehow the visitor's goalie managed to parry Vanegas's bid, which looked for sure as if it would go in at the left post. McGovern's one-touch of a cross whizzed just over the crossbar, leading his father, the team's coach, Don McGovern, to put both hands to his head.

In the remaining 26 minutes, the Bonackers kept their feet to the gas, and the team's stout defenders continued to repel the formidable visitors' frequent attacks.

It was the eighth shutout, or "clean sheet," for East Hampton and its senior goalie, Christopher Barahona, and improved its league record to 7-1-1 with one game yet to play, at Miller Place on Monday.

McGovern said East Hampton could not claim the championship yet given that Amityville, which apparently has one other league loss, to Sayville, had three games remaining, one of which will be with Sayville.