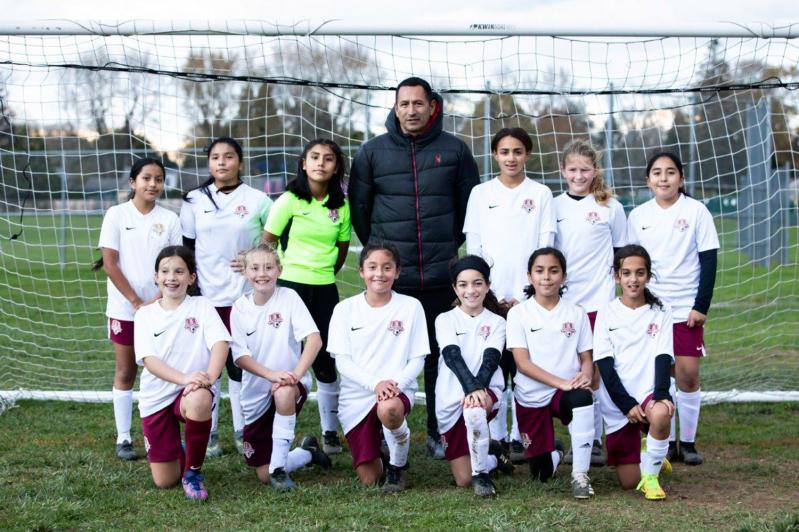 Luis Barrera’s under-12 girls soccer team is to play in the Long Island Junior Soccer League’s top division come the spring as the result of going undefeated in the second division this past fall.
Mike Green
By Jack Graves

All four of the East Hampton Soccer Club’s youth travel teams, one of which is an under-12 girls team coached by Luis Barrera, recently won the Long Island Junior Soccer League divisions in which they played, all of them going undefeated. They are to continue to be active this winter.

“They’re going to be great,” Barrera said of the u-12 girls, who will play in the first division this spring, and whose arrival at the high school in several years will undoubtedly be welcomed by East Hampton’s girls soccer coaches.

Barrera coached the u-12 girls and the u-9 boys; Tamay, the u-11 and u-13 boys. “We work on everything in our practices, individual skills and strategy,” Barrera said. “We’ll be practicing in the Amagansett School this winter, on Fridays, from 4 to 9, using a futsal [indoor] ball.”

Strikers in an EDP League Cup of New York tournament game played at Fort Totten in Queens on Nov. 21. Cup games are yet to be played with Stony Brook and White Plains. Barrera’s charges are to compete as well this winter in an Islandwide futsal league, whose schedule is to come out soon.

When this writer said over the phone to Elle Reidlinger’s mother, Whitney, the Springs School’s athletic director, that presumably Elle as the center middie “ran the show,” she demurred. “Well, some days, but all of these girls are versatile — they can play anywhere.” The only team to play to a standoff with East Hampton’s u-12s, she said, was the Village of the Branch Blazers, a team from Smithtown.

The players were from Montauk, Amagansett, Springs, and East Hampton, Reidlinger said, “which is nice because they’ll have several more years of playing together before they’re at the high school. They’ve been playing together for the past one and a half years, beginning in the fourth division. Each season — they play in the fall and spring — they’ve moved up.”

While East Hampton High’s girl soccer program continues to build, the boys program has for at least a decade been very strong, and, given the success of the latest group of younger players — and the good relationship Tamay and Don McGovern, the varsity’s coach, have — it should continue to be so.

Tamay said further that the u-9 and u-11 boys are now in EDP Cup tournaments with teams from Brooklyn, Yonkers, and South Huntington, and that there may be other tourneys in which East Hampton’s youth teams will play this winter.

The youth teams, he added, are also benefiting from the fact that a number of players on the East Hampton Soccer Club’s men’s 7-on-7 team that he manages have signed on as youth team assistant coaches, including William Solis, Mark Bako, and Sebastian Fuquen. (The 7-on-7 team won a league playoff championship, its first one, at East Hampton’s Herrick Park in November.) Esteban Aquilar, the club’s goalie, and Carlos Barahona, a recent East Hampton High School graduate, coach the youth teams’ goalkeepers.

“Our adult team,” said Tamay, “is playing in the S.Y.S. winter soccer league” at the recreation center in North Sea. “We’re 2-2 at the moment with four games yet to play until the playoffs.”