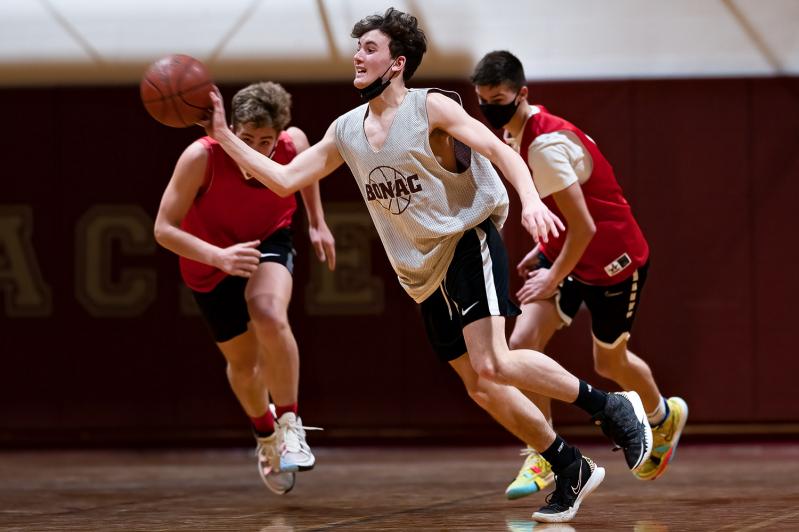 Luke Reese, the East Hampton High School boys basketball team’s point guard, has high hopes for the season, as does the squad’s coach, Dan White, “as long as they rebound and stay out of foul trouble.”
Craig Macnaughton
By Jack Graves

White said by phone on Monday that he was particularly impressed by his starting five — Luke Reese, Jack Dickinson, Finn Byrnes, Hector Montanaldo, and Liam Fowkes — adding that “the younger players, Mike Locascio and Jesse Cohen among them, played hard, though they’re not quite as familiar with our system as the starters are. Their effort was excellent, though. It’s a great group. They will be fun to watch.”

The team varied its defenses — its man-for-man coverage was particularly strong — transitioned well, and scored inside and from long range. “Liam had four 3s in the Hampton Bays scrimmage,” said White.

“Luke, Jack, and Finn will be our go-to guys. They’re very aggressive. If we can rebound and stay out of foul trouble, we’ll be fine.”

East Hampton is in a league with Amityville, Half Hollow Hills West, Harborfields, Kings Park, Islip, Sayville, and Rocky Point. The Bonackers were 4-1 when the coronavirus pandemic put a halt to the League VI campaign in February. Southold was 3-3 in League VIII and Hampton Bays was 0-6 in League VII at the time.

White’s squad was to have scrimmaged at Center Moriches (5-0, League VII) Tuesday, a team that promised to offer stiffer opposition than Southold or Hampton Bays, and is to begin the season tomorrow versus Greenport in a four-way tournament at Mattituck whose games are to be played tomorrow and Saturday. Kings Park is to open the league season here next Thursday at 6:15 p.m.

Greenport is to play at Pierson (Sag Harbor) High School on Monday at 6:15, and Pierson’s Whalers are to play host to Port Jefferson next Thursday at 6:15.

Turning to wrestling, Ethan Mitchell, East Hampton’s coach, will put 22 of his 35 wrestlers on the mats at the Frank (Sprig) Gardner tournament here Saturday.

It’s the first time in three years that the Gardner tournament, usually an annual fixture, has been held here. Each participant will be allowed two spectators, but Mitchell said he’s trying to get it live-streamed over YouTube. His email address is [email protected].

When the Sprig tourney was last held here, East Hampton’s entire squad numbered 16. It’s more than twice that now, and Mitchell expects, thanks to Steve Redlus and Jonathan Augi, the East Hampton Middle School’s coaches, that the program will continue to grow.