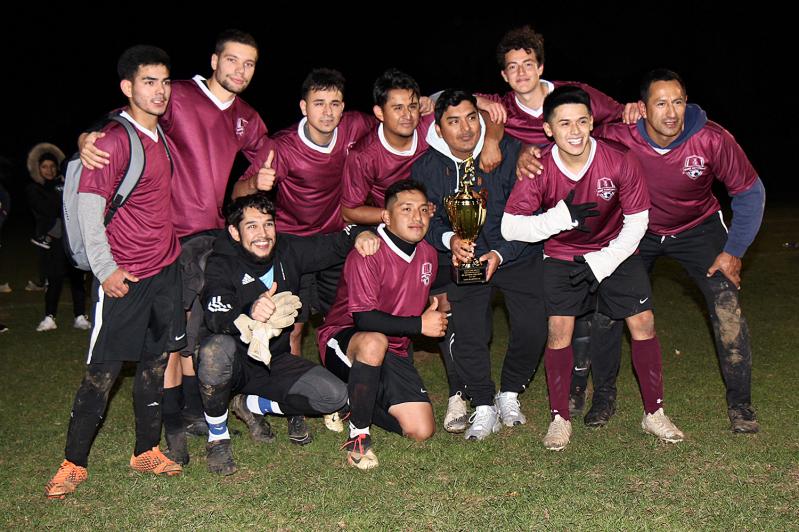 The East Hampton Soccer Club, the 7-on-7 men’s league’s youngest entry, decisively defeated the perennial champion, Maidstone Market, in the fall final at East Hampton’s Herrick Park on Nov. 15. The goal-scorers for the Soccer Cub that night were Mark Bako, second from the left, and Justin Carpio, second from the right.
Leslie Czeladko
By Jack Graves

Two teams, Maidstone Market and the East Hampton Soccer Club, which had twice played to draws in the regular season, met for the men’s soccer 7-on-7 fall championship at East Hampton’s Herrick Park on Nov. 15, with the Soccer Club winding up a 4-1 victor.

It was the first time that the Soccer Club, the league’s youngest, had won a playoff title, said Leslie Czeladko, the league’s manager.

Czeladko reported on the league’s website that “both sides had all their players, and for the first 47 minutes, the game was scoreless.” Maidstone took more shots during that span, “but they were very inaccurate. John Romero Jr. had a great chance to give Maidstone the lead in the first half when he found himself six feet out with the ball headed his way, but in trying to tap it into the Soccer Club’s net he whiffed and fell.”

“It looked as if the game would go to overtime, and, possibly, to penalty kicks, but with 12 minutes gone in the second of the 35-minute halves, the Soccer Club began to pour it on.”

The first of the Soccer Club’s four goals was scored by Justin Carpio, a striker, who found himself unmarked as he gathered in William Solis’s free kick before beating the Market’s goalie, Alex Mesa, to the far post.

“Two minutes later, Carpio has the ball and hits it to [Mark] Bako, who was able to dribble past a couple of defenders and, from about 15 yards out, fires a bouncing grounder past Mesa for a 2-0 lead.”

“With 16 minutes left in the game, Bako scored again from 15 yards out, blasting a shot just under the crossbar that virtually put the game out of reach for the perennial champions.”

“Maidstone knew they were finished, and Carpio rubbed more salt in the wound when he scored from inside the goalie box with three minutes left. Romero atoned for his earlier miss when, with a minute remaining, he tapped in the rebound of a free kick taken by Jorge Naula. And, once the trophies were handed out and photos were taken, the rain came.”

Maidstone’s Nick Escalante, who shared the league’s “golden boot” award with F.C. Palora’s Robert Cueva, with 10 goals scored, was shut out by the Soccer Club. Bako, who arguably has the league’s heaviest foot, finished the season with nine goals, and Carpio wound up with seven.

Cueva and Escalante were the season point leaders, with Bako and Carpio not far behind them.

In semifinal-round games played on Nov. 10, the Soccer Club, the playoffs’ second seed, defeated the third seed, F.C. Tuxpan, 2-0 thanks to penalty kicks scored by Bako and Elvis Rojas that decided what had been to that point a scoreless standoff.

Maidstone, the fourth seed, likewise topped F.C. Palora, the defending champion and the playoffs’ top seed, in penalty kicks, though it took the Market four rounds before it emerged the winner. It was 1-1 at the end of regulation, Yuder Orellana having scored for Palora and Nick Escalante having scored for Maidstone.

Czeladko described the first half as “fast-paced and violent. . . . At times it looked as if a fight would break out — many fouls were occurring. The referee issued two yellow cards, though it seemed that more should have been given out.”

Orellana’s goal would have held up, Czeladko said, were it not for the fact that Escalante was fouled “just outside the goalie box, occasioning a direct kick, which he buried.” Penalty kicks, rather than an overtime period, ensued.

Celebrate Hanukkah All Across Town and at Home
Stuffed With Turkey? Walk It Off
Blood Drive Tuesday in Bridgehampton
END_OF_DOCUMENT_TOKEN_TO_BE_REPLACED