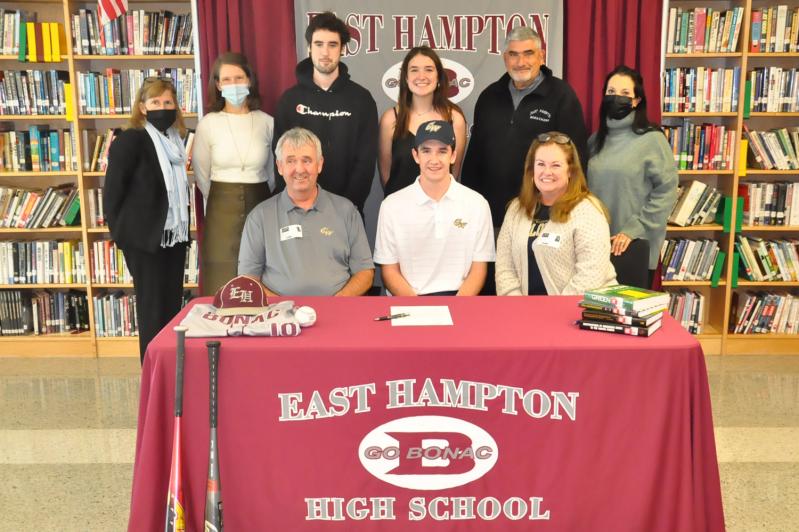 Colin Ruddy’s recent signing with George Washington University was witnessed by, among 20 or so others, his father, Mike, his mother, Maureen, and, back row, from the left, Marilyn Marsilio, his guidance counselor, Sara Smoth, East Hampton High School’s principal, his brother and sister, Owen and Lila, the school district’s athletic director, Joe Vas, and the assistant high school principal, Jill Collins.
Jim Stewart
By Jack Graves

Besides the good right arm that recently won him a full athletic scholarship to play baseball at George Washington University, Colin Ruddy, a personable 17-year-old East Hampton High School senior, has a good head on his shoulders, which very well may be the most important thing when it comes to success in athletics.

The middle child of Maureen and Mike Ruddy, a mason, who came to the United States from Donegal, Ireland, at the same age he is now, he has played baseball from an early age, though until recently it’s not been his only sport, basketball and football being others.

His father, Ruddy said during a conversation at The Star the other day, had not been a baseball player, though he had done very well in junior and open badminton tournaments in Ireland, he said, adding that while neither his father nor his mother had pushed him, they had been “very supportive” — of his brother, Owen, and sister, Lila, too — when it came to his baseball aspirations.

Playing with older kids in his Little League years — with Owen, Elian Abreu, Austin Brown, Logan Gurney, and Christian Johnson, for instance — had helped build his confidence. And meditation, which he first heard about when at a baseball camp at Duke University in the fall of his sophomore year, has further strengthened his composure.

“I take pride in the mental side. . . . Coach Alversa says I’m ‘stone cold on the mound.’ You have to be — you can’t be emotional, you can’t reveal. Meditating has helped me feel nice and comfortable on the mound — it’s helped lessen the pressure. As Yogi Berra said,” he said with a smile, “ ‘Baseball’s 90 percent mental, the other half is physical.’ ”

To deal with the physical part, Ruddy works out three times a week with Connor Miller, a personal trainer, in Bridgehampton, beginning at 5:45 a.m. Asked if those workouts focus on strengthening his pitching arm, he said no, they focus on his legs, which are “very important” in pitching.

He’s 6 feet 5 inches tall and weighs 197 pounds, though he’d like to add muscle mass and eventually weigh 215, he said.

His travel team, the East Coast Lumberjacks, with players on its roster from Massachusetts to Florida and with “23 Division 1 commits,” won in July an 18-and-under national tournament, a tourney in which he received the most valuable pitcher award on the strength of his performance in a 1-0 quarterfinal-round victory.

The Lumberjacks’ season finished in October, though since the age of 9 Ruddy has worked the year round with a coach, Mike Megale of Stamford, Conn., a former University of Pittsburgh shortstop and New York Yankees bullpen catcher whose work ethic he greatly admires.

“I’ll go to Connecticut or he’ll come out here. It used to be twice a month. Now, it’s once a month. We’ll either work out at the high school field [where his father put up two batting cages with pitching mounds] or at home. My dad put one up there too. He helps me with a lot of off-the-field stuff that makes me better when I’m on the field.”

Asked how fast his fastball was, he said, “It’s topping out at 85 or 86. Some guys my age are throwing in the upper 90s, but I don’t think it makes a difference. The velocity and speed will come eventually if I continue working hard. . . . It’s more important now that I throw with control, that I throw strikes.”

When it was suggested that it probably wasn’t necessary that he strike everyone out, Ruddy said sometimes it was. “It’s constantly a one-on-one battle.”

As for pitches, he relies on four — a fastball, a changeup that rides in on a right-handed batter, a knuckle curve that drops, and a hard-breaking slider, his best pitch.

Generally, the main thing now, he said, is to get stronger. He doubted that he’d be drafted by the major leagues this spring. He hopes to be drafted out of college.

Last season, East Hampton’s baseball team, with Ruddy as its ace, began well enough but underwent a slide with the playoffs in sight. He doesn’t think that will happen this spring, given “the drive that the younger players have. I’ve been working with 9, 10, and 11-year-olds, helping them with pitching, hitting, and fielding. They’re very motivated, as are the younger players on our team. They know that even though they’re from the East End they can play in college.”

Indeed, Colin Ruddy, who wants to major in exercise science at George Washington, has shown them by his own example that they can.