“It would be a big plus for the community and for the kids.” 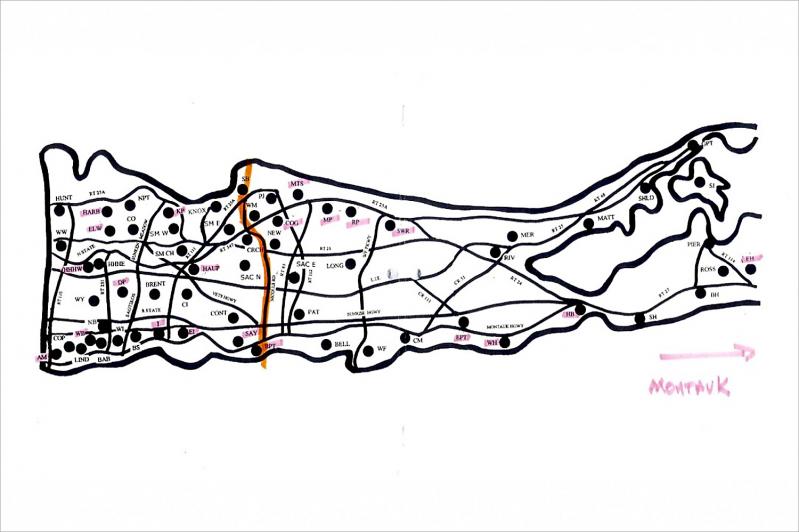 The dividing line under the realignment plan Joe Vas, East Hampton’s athletic director, is to discuss with fellow Section XI ad hoc committee members Tuesday would be Route 111, not 112, as shown above. There would be two Class A leagues east of that road, a northern one and a southern one along Route 27. Should Section XI approve the proposal, nine East Hampton High School teams that are in enrollment-based leagues at present would play in geographically-based leagues as of the fall of 2022.
By Jack Graves

The idea that East Hampton High School’s teams ought not to have to travel so far afield to play games has been around for a while. For almost two decades, in fact, when, in 2004, Bill McKee, then the assistant varsity boys basketball coach, and Ed Bahns, the baseball coach at the time, proposed that the county be divided into two leagues, one east and one west of County Road 112.

“It’s ridiculous that East Hampton, which is the easternmost high school in Suffolk, is playing schools like Huntington and Amityville, which are almost in Nassau,” McKee said in an article about the matter that appeared in The Star in February of 2008.

“It’s the time,” Tracey said, “the time our kids spend on the road. The schools like Huntington, Amityville, and Harborfields come out here once, while we have to go up to their neighborhood many more times.” That having been said, Tracey did not think Section XI, the governing body for high school sports in Suffolk, would ever come around to East Hampton’s way of thinking.

Well, it seems Section XI finally may have: Joe Vas, who has been East Hampton’s A.D. since 2006, and who took the ball from Tracey and ran with it, as it were, said during a recent conversation that he is hopeful the idea may soon receive a sympathetic hearing at the county level. His hope being that the eight teams here — boys soccer, girls volleyball, boys and girls basketball, boys and girls winter track, softball, and baseball — that play in enrollment-based leagues would be able to switch in the fall of 2022 to geographically based ones.

The urgency of the situation had only worsened over the years, said Vas, the strains on finances, scheduling (exacerbated further by a widespread bus driver shortage at present), travel time (lengthened by “trade parades”), and academics having ballooned during the past year and a half of the coronavirus pandemic.

An ad hoc Section XI placement committee headed by Westhampton Beach’s A.D., Kathy Masterson, and of which Vas is a member, is to meet on Tuesday to discuss his proposal, which he first presented to Section XI’s executive committee last spring.

His realignment plan, which would use Route 111 as the west-east dividing line — a line that has shifted somewhat since McKee and Bahns first proposed that it be Route 112 — would not affect power-rated leagues, Vas said, but those in which enrollment has been used as the baseline.

Consequently, he has proposed since 2014 that Kings Park, Rocky Point, Harborfields, Islip, and Amityville be jettisoned as East Hampton opponents in favor of Westhampton Beach, Hampton Bays, Bayport, Sayville, Shoreham-Wading River, and Eastport-South Manor. Thus travel time and its resultant costs would be halved, he maintained.

“East Hampton is one of a dozen Class A schools between us and Route 111 that could be divided into two leagues of six. You’ve got Sayville, Bayport, Eastport-South Manor, Westhampton Beach, Hampton Bays, and East Hampton along Route 27, and Shoreham-Wading River, Rocky Point, Miller Place, Mount Sinai, Comsewogue, and Hauppauge on the northern side. They’re all A schools. All the A schools west of the line could do the same thing.”

“It makes sense, in every respect,” East Hampton’s athletic director continued. “The pandemic, with its stresses on scheduling, travel time, the kids, and the community — we had to schedule a number of Sunday games this fall because of the widespread bus driver shortage — has made the argument for realignment all the more compelling.”

There were, he added, in contrast to past East Hampton realignment efforts, “a lot of people pushing for this now. I’m hoping it has legs. It would be a big plus for the community and for the kids.”

Celebrate Hanukkah All Across Town and at Home
Stuffed With Turkey? Walk It Off
Blood Drive Tuesday in Bridgehampton
END_OF_DOCUMENT_TOKEN_TO_BE_REPLACED