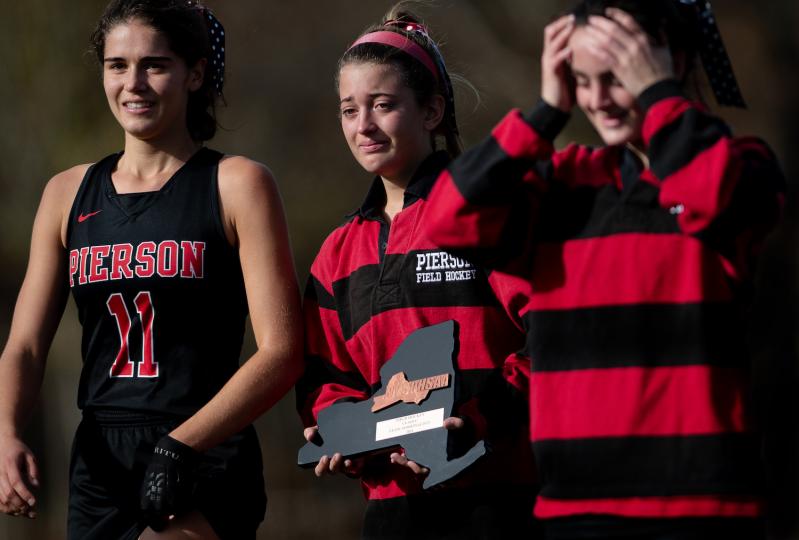 A home field advantage wasn't enough to help the Pierson (Sag Harbor) Whalers field hockey team overcome the onslaught that was the Whitney Point Eagles in the state Class C semifinals on Saturday. The Eagles, led by the senior Kaylie Lynch and junior Brenna Bough, who each scored five goals, ran the score up to 11-0 at Centereach High School and advanced to the finals on Sunday.

The Eagles entered the game with an impressive 17-0 record and were ranked number-one in the state and number-three nationally, according to maxpreps.com. The Whalers, enjoying their first trip to the states since 2015, ended their season at 7-10.

Whitney Point's head coach, Nicole Huston, when asked about the depth on her team, said, "We have a youth program, so our kids start in kindergarten."

After defeating Carle Place in the regionals, Pierson's girls did what they could against the highly skilled Eagles but were rarely able to play to their offensive strengths.

In short, Whitney Point was dominant, and ultimately prevailed in the state finals, where they defeated Hoosick Falls (who themselves had a 17-game win streak prior to facing the Eagles) 6-1.

But while they were kept off the official scoreboard, Pierson scored in other departments.

The freshman goaltender, Cali Wilson, was awarded the sportsmanship award. She faced 28 shots on goal, but was all smiles after the game. "I'm trying to look at this in a positive way. I tried to have as many saves as I could. And we were focused on having fun."

On facing the Ohio State-bound offensive powerhouse Brenna Bough, Wilson said, "Her shots were really hard and she found the angles."

Pierson's coach, Nina Hemby, had lots of praise for Wilson.

"The award is very fitting. Cali stepped up this year when we had no goalie. It's not the position she wanted to play at all, but for the team she said, 'Yes, I'll do it.' "

Meanwhile, the Pierson junior Meredith Spolarich picked up the All Tournament award.

It would be hard to overstate Spolarich's contributions to the team's offense and defense this year. Most games she seemed to be everywhere all at once. She was grateful for the award and added, "It feels good to be recognized in a sport that you love and that you put so much of yourself into."

Wilson, who plays left defense, had a strong last game as a Whaler. With her team down 3-0, she courageously dove across the goal, stick outstretched, to try and prevent the Eagles fourth goal. She also stopped a sure goal in the third quarter, which earned the Eagles a penalty stroke that they converted to go up 8-0.

But Wilson was not demoralized by the lopsided loss, nor by the raucous Whitney Point fans and their cowbells. Like many of her other teammates, she seemed to focus on the positive experience of getting to play in the states.

Positivity and chemistry cannot be drilled into a team. It only comes through shared experience, and with strong leadership.

"It was really cool getting to states and fun playing with Mia, Meredith and Eva [McKelvey] on defense for the last time," said Wilson.

Co-captain Spolarich also took the loss in stride, focusing on the effort of her team, "I think we played our best and that's all that we could do." Madison Stuckart, a senior, agreed, "We definitely put up a fight."

Coach Hemby summed it all up: "We never gave up. We didn't let the score deter us. We made it to the semifinals and no one can take that from us. We made a lot of improvements in the beginning of the season that definitely carried us through all the way to the end. It was a great experience to be here."

After the loss, things didn't get much easier for the Whalers. On the ride home, they were essentially chased eastward by a rogue thunderstorm that produced a suspected tornado in Nassau County and dime-size hail.

But the tornado, like Whitney Point, was behind them, somewhere vaguely west.  As the Jitney streaked east and homeward, Hemby was focused on the future. "Next year we're looking to be right back there at states."
--
Correction: The Whalers played Saturday in the state Class C semifinals. Due to an editing error, an earlier version of this article gave the incorrect class and contest for Saturday's game.

Celebrate Hanukkah All Across Town and at Home
Stuffed With Turkey? Walk It Off
Blood Drive Tuesday in Bridgehampton
END_OF_DOCUMENT_TOKEN_TO_BE_REPLACED