Two golfers and one runner head to state meets 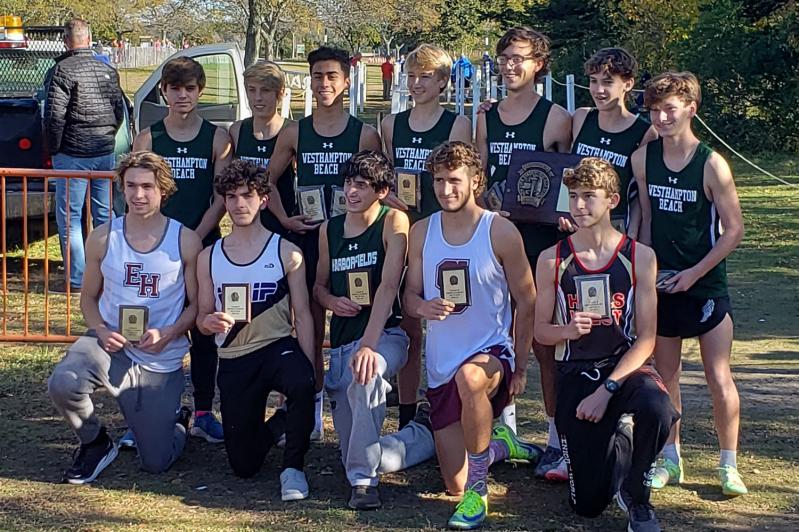 East Hampton’s Evan Masi, kneeling at left, was among those who qualified for the state boys cross-country meet that is to be held Saturday at Chenango Valley State Park near Binghamton.
Kevin Barry
By Jack Graves

Moreover, East Hampton, said the golf team’s coach, Rich King, was the only one of Suffolk’s schools to qualify two players — James Bradley, who tied for third, and Nico Horan-Puglia, who placed ninth — for the state tournament, which is to be contested at the Mark Twain Golf Course, a public 18-hole course run by the City of Elmira, where the writer lived, in the first week in June.

In cross-country, Evan Masi, who placed seventh among the Class B boys in the county meet’s 5K at Sunken Meadow State Park, qualified to run at the state meet Saturday at Chenango Valley State Park near Binghamton.

Dylan Cashin, East Hampton’s top female cross-country runner, placed seventh in the Class B girls race Friday, in 20 minutes and 28 seconds, but, the way things turned out, did not qualify for the state meet.

The six runners who preceded Cashin across the finish line “were not on the winning team, which was Sayville,” said Diane O’Donnell, East Hampton’s coach. “The top team goes and the next five who are not on that team advance to the state meet. Sayville and Shoreham-Wading River were tied for first through their first five — it went down to the sixth runner.”

Still, O’Donnell said, “Dylan ran very well — all of them did. I told you last week that she needed to find 10 seconds. She found six. By finishing in the top 10 she made all-county, and she beat some girls who had beaten her this fall.”

East Hampton, which went 4-1 in league competition this season, losing only to Sayville, placed fourth among the county’s Class B schools. O’Donnell will have “everyone back next year but Emma Hren. . . . We’ll be solid.”

As for the golf team, “The kids were disappointed that we didn’t win — we didn’t shoot as well on the second day as we had on the first — but we had a nice season, going undefeated in league play and winning the conference tournament,” King said, adding that, as far as he knew, the runner-up finish was the best an East Hampton golf team had done since the 2011 edition, coached by Claude Beudert, won the county championship and the Long Island championship a decade ago. East Hampton placed third last year, King said.

The team, one of 14 to vie at the Smithtown Landing Country Club, shot an aggregate 398 on the first day, but a 426 in a seven-team showdown on the second, Nov. 2. Ward Melville wound up the winner, with East Hampton second. Two other teams

Bradley, a sophomore, who won the county individual championship last season, played number-one for the Bonackers this fall. Horan-Puglia, who generally played three, but who, according to King, “could just as well have played two,” by finishing ninth was the last to qualify.

Returning to cross-country, Kevin Barry, the boys’ coach, said in an email that his team was the runner-up to “the heavily favored Westhampton Beach Hurricanes. It was the fourth county championship in a row for them.” East Hampton, he added, was the county champion in 2001, 2002, 2015, and 2017.

Back to Masi, Barry said if a comeback runner of the year award were handed out, Masi would have won it. “He broke an ankle last Thanksgiving playing football with his friends, and rehabbed it and was set to run in the spring, but because the ankle wasn’t fully healed he had to be shut down after two meets. . . . Evan, who made all-state in 2019, and worked hard to get back into racing shape, didn’t want this county meet to be his last. He made second-team all-county, all-division, and all-league, and was all-academic all-county.”

“I can’t tell you how pleased and proud I am of how our team competed down the stretch,” Barry continued. “We had such great senior leadership in our back-to-back league-championship seasons, and those 10 kids will be missed. But Bonac still has a core of great young runners left. I’m hopeful that next season we will end Westhampton’s four-year streak as county champions.”

Celebrate Hanukkah All Across Town and at Home
Stuffed With Turkey? Walk It Off
Blood Drive Tuesday in Bridgehampton
END_OF_DOCUMENT_TOKEN_TO_BE_REPLACED