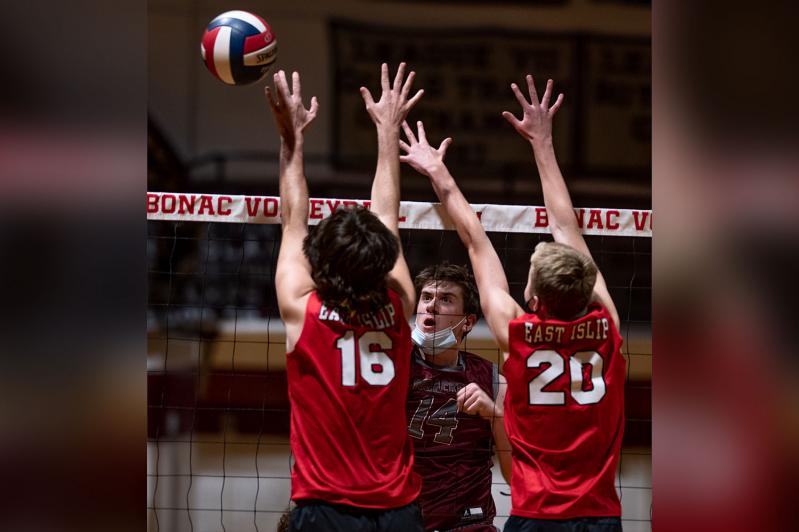 The East Hampton High School boys volleyball team, as expected, lost in three last Thursday to Eastport-South Manor, whose team is rated by Newsday as one of top ones in all sports in the county. Thus was East Hampton ousted from Division II’s tourney in the semifinal round, but the Bonackers’ first-round win over East Islip here on Nov. 2 is well worth reporting.

Lombardo, with his jump serve clicking, got things under way in fine fashion. It was 7-0 East Hampton by the time the visitors sided out, and the Bonackers continued in the lead thereafter on their way to a 25-8 victory that pretty much set the tone for the match.

Fittingly, Lombardo served it out from 21-8, with a putback and block by Nick Schaefer and a kill by Andrew Dimopoulos accounting for three of those points.

The Redmen woke up in the second set, which was closely contested throughout. At 25-25, Schaefer hit long, but the visitors’ server netted his attempt, putting the ball back in the hands of Lombardo, who, after serving, set Schaefer for the kill that clinched it.

East Hampton trailed through most of the first half of the third set, but came back to make a game of it. The Redmen recovered, however, winning 11 of the last 15 contested points.

With a sizable crowd of its peers chanting, “Let’s go, Bonac!” the home team was not about to let the match go to five. A service ace by Declan Bistrian tied the score at 4-4, and by the time East Islip sided out, Bistrian and his teammates were leading 10-4, the run having included three aces, a putback at the net by Calum Anderson, and a long kill attempt and a double hit by East Islip.

A great dig by Rodriguez helped East Hampton to a 19-10 lead, which Schaefer and Lombardo followed with winners. A rare netted serve by Lombardo turned the ball over, but the Bonackers quickly regained possession and, helped along by Redmen errors, put the match away.

“We played better tonight than we normally do,” Brussell said afterward, adding, when this writer remarked on Lombardo’s play, that “he definitely will be all-county.” Rodriguez, the freshman libero, had also “played awesome.”

Celebrate Hanukkah All Across Town and at Home
Stuffed With Turkey? Walk It Off
Blood Drive Tuesday in Bridgehampton
END_OF_DOCUMENT_TOKEN_TO_BE_REPLACED